Celtics lose to Wizards 92-118 and it wasn't that close

Share All sharing options for: Celtics lose to Wizards 92-118 and it wasn't that close

For much of the first half I wasn't even sure what I was watching.  The Celtics started off terrible, then made a run spurred on by some poor play from the Wizards, and then everything just kinda flopped around back and forth until the Wizards extended their lead by a little near the half.  Then it dawned on me.  This half was a microcosm of both teams.

The Wizards are good enough to build leads but not good enough to sustain them.  They have playoff tested veterans, but are led by youngsters that are still prone to streaky play.

Meanwhile, the play that sums up the Celtics season was the one right at the half.  Down 14 points with 4 seconds left in the half, Brad Stevens calls a time out.  Jared Sullinger promptly hits a three pointer to cut it to 11.  Your Boston Celtics!

Then of course the 2nd half happened.  Here's all you really need to know. 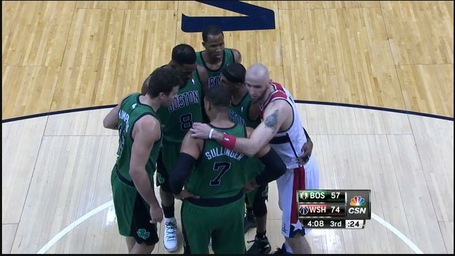 Yup, Rondo got Rondo'd by the Polish Hammer.

Sullinger had a good game, at least on offense (25 points)

The Wizards shot 62% from the floor.

The Celtics starters were 0-11 from 3 point land.