Analyzing Rajon Rondo's struggles from the free throw line: How can he improve?

There is hope for Rajon Rondo from the free throw line.

Share All sharing options for: Analyzing Rajon Rondo's struggles from the free throw line: How can he improve?

Rondo has changed his free throw routine and technique almost every season in an attempt to develop, but the numbers have only marginally improved over the years.

But something strange is happening with Rondo's free throws. In 2014, he is a Shaq-like 53.1 percent from the line on his first attempt, but he is a terrific 80.8 percent on his second try.

My first inclination was that this year's results were just a small sample size, but after investigating further, Rondo has been a significantly better free throw shooter on his second attempt every season of his professional career.

This likely means what you think it means: Rajon Rondo needs a practice shot to get his technique in order, then he turns into a fairly reliable free throw shooter.

Let's take a closer look at the statistics, some reasons why Rondo may struggle, and how he can improve:

Free throw shooting averages have not improved in the last 50 years. On average, college players shoot about 69 percent and NBA players are roughly 75 percent.

Rajon Rondo has never reached either level. Rondo is a 62.2 percent free throw shooter on 1938 total attempts, including his two-year career with Kentucky and every single regular season and playoff game with Boston.

In college, Rondo averaged almost 58 percent on both his first and second free throw attempts, but that has changed in the pros.

Since 2006, Rondo is nearly 13 percent better from the line on his second (or third) free throw attempt. He's shooting an abysmal 56.9 percent on his first attempt to a below average 69.6 on his second.

This difference is unheard of, especially since the average shooter is only 3 to 4 percent better on their second attempt from the line, according to a 2009 study by Zheng Cao.

The numbers are actually quite confusing, as the chart above details, because Rondo has gotten gradually worse on his first free throw attempt, but he has progressed on other attempts, especially the last two seasons.

Rondo is nearly 20 percent better on his second attempt in the past three seasons. This difference is extraordinary, especially considering he was only 10 percent better during his first four seasons.

It's impossible to pinpoint exactly why Rondo's percentages have dropped on his first attempt, yet risen on the second. Nobody can get inside his head, but we can observe his actions over the years to make our own assessments.

Rondo has altered his free throw routine nearly every season of his career. At Kentucky, Rondo notoriously changed it on a month-by-month basis, and that has turned into a year-by-year process in the NBA.

Take a look at this video to see just how much his routine has evolved over the years:

The first thing that becomes apparent is that his motion changed drastically after his rookie year, when he rushed through the free throw shooting process. In 2008, Rondo slowed it down, appearing more composed from the line.

But all he did is slow down, as the mechanics have stayed the same since that year. The footwork, the crouch, and the follow-through, are all still very similar, which is why the results probably haven't improved.

Yet the routine has been adjusted every single season. Rondo has revised the amount of times he bounces the ball, if he walks to the line or just stands there, hand movements, and whether he looks down at the ball or up at the rim.

Rajon Rondo has never given his routines enough time to maturate into habits. Once the conscious becomes unconscious, he may find regular success.

That's a big problem. Having a routine, with no matter what you do in life, helps your mind and body establish focus and rhythm. Things become easy and that increases confidence, or it makes the action come naturally.

Even though adding the Ray Allen-like shot stroke this season was long overdue as part of his routine, making constant changes doesn't lead to more success. Rajon Rondo has never given his routines enough time to maturate into habits. Once the conscious becomes unconscious, he may find regular success.

Yet, none of this directly answers why he's considerably better on attempts after his first, but that's because there isn't a definite answer. During his first shot, he doesn't take it slow, so he isn't able to focus enough or get his mechanics perfected.

But he is then calmer on his second attempt, which leads to a higher success rate, which leads me to believe that any issues he's having are mental just as much as they are physical.

Play and practice the same way

The technical problems with Rajon Rondo's free throw attempts are correctable -- or at least they should be. If he accomplishes this, it'll lead to increased confidence, a more consistent form, and then the results will come naturally.

If a player hasn't improved a specific attribute in eight seasons, you'd normally think they'd be a lost cause, but Rondo is different. He's a special player who has taken his game to a new level by progressing his skills each season. So, what does he have to do to increase his free throw percentage?

Most importantly, Rondo needs to play how he practices. His new "Allen-like stroke" is something he can build on during the offseason. In fact, the main reason for his lack of success might be a simple fix. Look at this clip and take notice of his right elbow during the routine, and then during the actual shot.

When Rondo goes through the motion he keeps his "elbow in," which any shooting coach would teach in a Shooting 101 class. But on the free throw, which is all that counts on the stats sheet, Rondo's elbow sticks out at awkward angle. 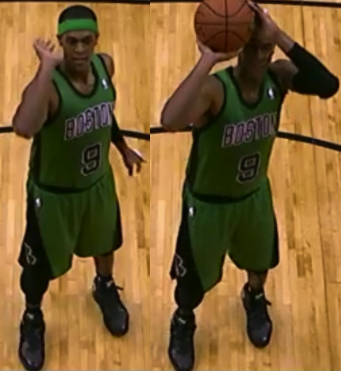 From the top angle, you can clearly see how much Rondo's form changes when the ball is in his hands. His body contorts, his head dips, and his elbows stick out. Even his feet adjust slightly, to become more "square" with the rim (which may actually cause the upper body issues).

And from this angle, you can clearly see how Rondo dips his head, neck, and shoulders. Parents tell their children to sit up straight, but Celtics coaches should tell Rondo to stand up straight when taking his free throws.

This is very bad technique and leads to inconsistency, which is why shooters are advised to keep their elbow in. This proper method allows the elbow, forearm, wrist, hand, and ball to stay perpendicular with the rim, which leads to efficient results. Watch clips of any great free throw shooter, and their elbow is almost always in.

Maybe all Rondo needs to do is shoot the way he practices. Rondo's practice form is impressive, but his actual shot form is still as ugly as ever.

But it's hard to imagine that one of Rondo's coaches hasn't pointed this out to him in the past, especially since he's currently being taught by one of the greatest shooting coaches in the world, Ron Adams. Not to mention that Rondo is a film-watching freak, so he has to have noticed this himself.

It's truly baffling; especially when you consider the fact he has developed into a reliable mid-range jump shooter despite sticking with the "elbow out" form.

But for free throws, when there is far less natural momentum involved, it may be more important to shoot like a machine, with an always reliable routine, form, and release.

If Rajon Rondo wants to become a better free throw shooter, he has to pick a routine and stick with it. But he'll also need to be more engaged on his first attempt, just like he is with his second and third. His form could also use an adjustment to keep his elbow in, which is what he practices during his routine anyway.

Rondo has a positive track record of being able to improve every facet of his game, so maybe next season he will become a truly complete player.