The Lottery Wheel: A proposal that solves the NBA's draft issues

With the flawed NBA Draft Lottery taking place later tonight, it's time to step outside the box with a solution that would solve all of its issues.

Share All sharing options for: The Lottery Wheel: A proposal that solves the NBA's draft issues

Wait a minute. Why don't we just combine the current NBA Draft Lottery and Mike Zarren's lottery wheel proposal to fix most of the problems with the format? That's what I thought to myself months ago when my idea for remodeling the lottery first came to mind.

After months of tinkering with the data, I'm finally ready to reveal "The Lottery Wheel," my proposed solution that may fix the league's problems with the draft.

Before jumping into the raw details of The Lottery Wheel, here are some key things it accomplishes:

My "Lottery Wheel" proposal is based on Mike Zarren's wheel, as published last December on Grantland, and it draws some influences from his revised idea from March. Like the wheel, it would eliminate the current draft lottery, but my proposal is far different.

In Zarren's original proposal, a team would receive a specific first round draft pick once every 30 years, with no attention given to their draft pick. This was included because it removed the possibility of teams tanking for higher picks, or the theory that teams would rather "tank" out of the playoffs if they were the 8-seed (like Atlanta this season).

But with my Lottery Wheel, each team receives "odds" based on their positioning on the wheel. Teams would know their draft odds during the cycle because the circle continues on forever. There would still be a lottery each year around this time, but the lottery would be related to wheel position, not standings.

Every single season, a team would have specific odds based on their turn on the wheel. Before explaining further, here is a photo of The Lottery Wheel: 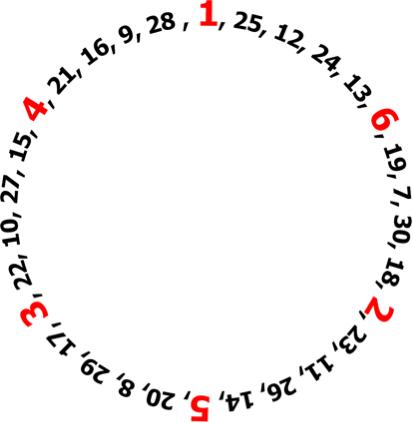 This is very similar to Zarren's wheel since it eliminates the link between having a bad record and getting a top pick. But it goes a step further since it also doesn't discriminate against teams that have success, because every single team will receive odds at specific spots during the cycle.

But Zarren's original proposal was a bit unfair since a team could go multiple years before receiving a high draft pick, which is why he revised his format. But with my Lottery Wheel, it goes a step further, since teams are only granted a "fixed chance" and not a "fixed pick" depending on what number they're at on the wheel. This means that every single team has a reasonable chance at a top 3 selection in the draft.

So, what are the odds? Here is the full odds chart, click it to see the photo in full size: Here are some specific examples:

After the 3rd pick is determined, teams with odds 21 through 30 won't have a chance at another selection until pick #12 is determined. This is in place to give extra value to selections 1 through 20, like any ordinary draft, but unlike the current system, there are still no guarantees since teams can slip down depending on their odds.

With the league's current lottery system in place, the team with the top odds has a 64.3% chance at a top 3 pick, and the 14th team has only a 1.8% shot. This is unbalanced, and my proposal is in line with what some league executives believe is a more simple solution (with relatively even odds).

After the first "odds" are chosen, the same lottery method to determine the actual order that is used today could stay in place, with some tweaks of course.

Currently, only the first three picks are determined using a combination of 1,000 permutations after 14 ping-pong balls are placed in a lottery machine. (Read more in-depth about this technique on Wikipedia, or by watching this video from NBA.com.)

With my proposal, it would be a lengthier and more complicated process (number of balls would change from 14 to 30, as would the permutations depending on the pick), but I believe the extra time is worth it considering the end result would be much more fair for every NBA franchise.

This part (the physical action of the lottery, with ping-pong flying around in a machine) would need more ironing out as it is the most complicated part of the process, but that could be decided at a later time after "odds" are finalized.

Let's go over what this proposal accomplishes:

With that said, I believe The Lottery Wheel is by far the best NBA draft remodel that I have seen proposed. It successfully incorporates different philosophies (both the lottery and wheel), keeps parity alive in the league (no discrimination), and is fair to all organizations (equal opportunity).