Boston needs a rim protector; are there any options in free agency?

There's no question about it: the Boston Celtics need a big man who can protect the rim. Some fans once dreamed about acquiring Houston's Omer Asik, but he has been shipped off to New Orleans, which removes him as an option.

Fortunately, there are a number of strong options at the big man position in free agency, though none of them are elite rim protectors. In part two of our Offseason Preview series, here are ten possibilities if the Celtics want to explore the big man market:

The dream option in free agency is Marcin Gortat, who had another terrific season last year for the Washington Wizards. He is an efficient player on both ends of the floor, providing energy each and every possession. Gortat isn't a true rim protector, but he battles hard and is good enough to contest on nearly every shot at the rim. He doesn't miss rotations and works as an "anchor" since he's a vocal leader on the floor. 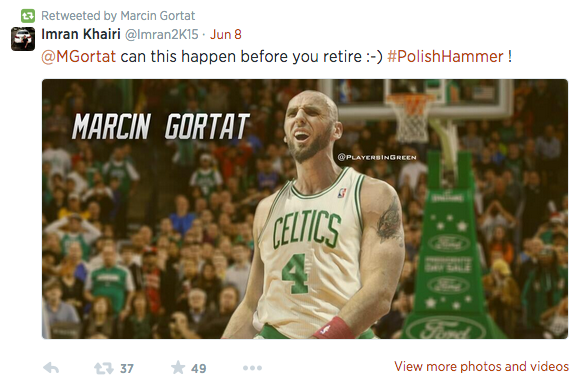 Boston was hot for The Polish Hammer back in 2012, as they were reportedly made a trade offer for him, so it's even more fascinating that Gortat would retweet that photo of himself in a Celtics uniform. Maybe he has interest in joining Boston, though Washington is still the front-runner to re-sign him.

As much as the Celtics may want Gortat, it'll take a sign-and-trade to acquire him; Boston is going to have to give up something. There's no way he'd accept the full mid-level exception (valued at $5.3 million), because other teams will likely offer him up to $10 or $12 million per (and he's worth it).

Perhaps, the Celtics could organize a sign-and-trade with the Wizards, where they would re-sign Gortat, and then could receive someone like Jeff Green back in the deal, since they are in need of a wing scorer, along with other assets.

However, they could also prefer Boston's trade exception or some of the non-guaranteed contracts, which would make them players in free agency. Bottom-line: Boston isn't getting Gortat unless it's through a sign-and-trade.

One of the most attractive restricted free agents this summer is Detroit's Greg Monroe, but his fit with Boston is questionable. Monroe is a terrific (and underrated) offensive player but he's lacking skills on the defensive end. He will undoubtedly be offered a high price tag, one that will likely be out of Boston's range; and for good reason, because the Celtics have plenty of offensive-oriented big men on the roster already.

What the signing of Josh Smith could mean for Greg Monroe, Andre Drummond, and the intriguing but dysfunctional Pistons.

However, Monroe may be a fit if they believe he can improve to a passable level on defense, but there is no guarantee he does so. Monroe has never been on a team with cohesiveness, so placing him in a new, healthy situation in Boston may promote more consistency on the defensive end, taking his game to another level.

The Celtics could inquire about Monroe as a potential sign-and-trade, since they could offer a player like Jeff Green who better complements Andre Drummond and Josh Smith, in addition to other assists. However, considering Boston's desperate need for rim protection, they might be better off finding a more balanced big man.

The only reason Pau Gasol is even on this list is because of Boston's (reported) infatuation with him over the years. There have been the constant (silly?) "Rondo for Gasol" rumors seemingly ever season, so interest may remain despite the fact Gasol will turn 34-years-old later this year.

With a silky smooth offensive game, Gasol would certainly give the Celtics an intriguing low post scorer. But like Monroe, it's hard to see the Celtics paying the required price tag since Gasol will probably get a huge one-year deal with a contender, or a team will overpay with a multi-year contract, neither of which the Celtics will be able to comfortably offer.

More than any other player on this list, re-signing Kris Humphries is the most realistic option for the Boston Celtics. He provided energy last year and was a rebounding machine. Even though he's not a spectacular defender, he creates energy, plays hard, and brings complementary scoring on the offensive end.

One of the more interesting options for the Celtics this summer is Ekpe Udoh, who is a unrestricted free agent after the Milwaukee Bucks declined to make him a qualifying offer. Udoh has chronic knee issues, but is a terrific rim protecting center when healthy. He brings energy and enthusiasm, and could even become a potential "glue guy" in the locker room. If there is interest the Celtics could possibly make a fair offer using part of the Mid-Level exception.

As a Celtics fan, you already know the deal with Greg "Stiemer" Stiemsma; he's a hard-working, shot blocking, defensive-oriented center, which happens to be exactly what they need on their roster. If the Celtics are looking for a cheap option somewhere in the neighborhood of $2.5 million, they could use part of their Mid-Level or even all of their Bi-Annual (~ $2.1 mil) to sign him.

Has Andray Blatche finally matured? After years of continuous off-court issues, Blatche turned in a relatively quiet and extremely productive season for Brooklyn. He's a very good offensive player who can occasionally explode for huge outbursts, but he's also a solid defender. While he isn't a shot blocker, he won't hurt the team when he's on the floor. However, if the price is too high, it's hard to see the Celtics having much interest, especially because he could always revert back to his toxic off-court antics.

Why Jordan Hill is best frontcourt defender on Lakers roster

Jordan Hill has become the Lakers most versatile frontcourt defender on the roster with the glaring hole Dwight Howard has left in the Lakers defense.

Why Jordan Hill is best frontcourt defender on Lakers roster

Because of his small role on a horrendous team last season, few people realize that he was one of the best rebounders in the NBA, averaging 6.3 contested rebounds per 40 minutes, according to SportVU. He was also 24th best in the league, grabbing a 43.7 percentage of contested rebounds. In other words, Hill could provide a Kris Humphries-like impact, but he's also a superior defender, is two-years younger, and will cost a lot less.

Emeka Okafor last played in 2013 when he anchored one of the league's top interior defenses for the Washington Wizards. However, a herniated disc in his neck erased his 2014 season, and there are questions about his durability if he returns to the court. Perhaps the Celtics are a team that can give him a fair contract and the ability to actually play immediately, one risk plenty of teams will be unwilling to take.

One of the biggest busts in the history of the league made his return to the court last season with the Miami Heat, and he struggled. As you'd expect, Oden didn't move like he once did, but in less than 30 games of action he may have been able to shake off the rust before increasing his production next season. For a low price, maybe the Celtics would be interested in giving him a chance.

What Would I Do?

Do the Boston Celtics have any salary cap space?

In part one of CelticsBlog's Offseason Preview Series, we take a look at the Boston Celtics' salary cap situation.

Do the Boston Celtics have any salary cap space?

Acquiring Marcin Gortat would be ideal and I think the Celtics and Wizards could actually be a match for a trade, since Boston has assets that may interest them. However, the Wizards clearly want to retain Gortat since head coach Randy Whitman will fly out the Poland to talk with him. It just doesn't seem like he's as realistic of an option as you'd think, so having backup plans is necessary.

Greg Monroe is also interesting, and I'd actually like to think that Danny Ainge will at least give them a call to see what the price may be. But I think I'd prefer to see them look for a defensive-oriented big man like Jordan Hill or Ekpe Udoh. If we're looking for bargains here, then those two people can provide an impact very similar to what Kris Humphries did last year. However, both Hill and Udoh will be far less expensive than Humphries, which would allow the Celtics to make other power play moves via trade.

It'd also be worth seeing how Emeka Okafor's conditioning is, because he could be a great veteran to have on the team, and he'd come at a low cost. Even though he wouldn't be the long-term solution, he could provide value as a stopgap, giving the Celtics more time to find their "future" rim protecting big man.

Overall, Jordan Hill is the player I'd target if Marcin Gortat isn't a viable option or if no trades can be found, like for Larry Sanders. After reviewing the free agency class, it just appears that Hill provides the best balance and he could most certainly continue develop as a "late bloomer," just as he has in recent years for the Lakers.

Part 1: Do the Celtics have any salary cap space?