A key to the Celtics offseason could be... the Jazz?

What will they do with the 5th pick and Gordon Hayward?

Share All sharing options for: A key to the Celtics offseason could be... the Jazz?

A pervasive thought that keeps hitting me every time I read a mock draft (or do one myself) is how important the Utah Jazz pick is at number 5.  Maybe Danny Ainge has 2 or 3 guys that he values equally and he'll just take the best one available.  But at some level he's got these guys ranked in his head and I'd hate to lose out on his top choice because of that silly coin flip that determined the draft order between the C's and Jazz.

I wanted to get a better feel for what the Jazz wanted to do with their pick, so of course I reached out to an expert; Amar from SLC Dunk.  What he said was pretty surprising and enlightening.

I honestly believe that the Jazz are going to finish June 26th without the rights to the #5 pick in this draft. While it is a crap shoot, our team is looking at a way to move up. The last time they had the odds in their favor to move up, 2005, they got bumped in the lotto and then had to move up to get Deron Williams. Last season the Jazz moved up from #14 to #9. It may be harder to do this time around, and if that's the case, I can see the Jazz moving down.

There are no winners at #5, and picking at #6 is slightly easier because it makes life a little more simple. (Effectively, one less guy to worry about). The current Jazz GM, aside from liking to make moves (made three trades last draft), seems to draft for fit, not by best player available. The Jazz absolutely do not need another big (Derrick Favors, Enes Kanter, Rudy Gobert, Jeremy Evans, rights to Ante Tomic, etc), especially not another young one. The top guys left at #5 are bigs though.

Smart would be an interesting pick at #5, but I think it's a reach. The Jazz also have two young guards to focus on already in Trey Burke and Alec Burks. (I'm living in a world where Gordon Hayward is already packing his bags for Boston) As a result, I think the Jazz will circle the wagons, pick the best available bigman on the board and trade him. Depending on the mock that's either going to be Vonleh or Randle. If you guys are looking for one of those two, then one of those two will be available.

My sources, and history, tell me the Jazz want to move up or down, and probably will. If forced to use this pick on a player, they'll use it on the best available guy, and dangle him off as an asset. If the Jazz were forced to use their normative drafting strategy the best available guys would by either Smart or McDermott. And I would be very surprised to see the team take those guys at #5

So basically we can't just assume the Jazz will be picking there, so there's really very little way of knowing who that pick will be (it could be any number of teams picking in that spot).

The little nugget that Amar dropped in there about Hayward was not lost on me either.  Here's some more elaboration on Gordon's status with the Jazz.

I think his people are still going to want as much money as possible, and he is repped by an 'okay' power source. (Mark Bartelstein, Priority sports, some of their players are Kwame Brown, Jared Dudley, David Lee, McDermott, Plumlee, Jason Smith, Swaggy P, and a bunch of other guys) HOWEVER, I don't think he played well enough in '13-14 to earn a max deal.

I do know that there are a ton of teams with money this off-season and only a few really good players to go around. As a result I can see a team that gets spurned by one of their top targets end up offering more than they should for Hayward. In a two system problem (just Hayward's peeps and just the Jazz) I think the Jazz have more power in this situation, however, involving a third or fourth party swings the bargaining power back to Hayward. In reality the market should be lower based on his performance (shooting % especially), but today your value is not based on your performance at all, but by other market influencers (who has money, for example).

The Jazz cannot pay him as much as he wants. And some team is bound to offer him too much. These are the feelings I have based on looking at the economics of how many teams have cap space, and how many actual players you'd want to offer a contract too. (This isn't the best FA class) So I would welcome a sign and trade, especially with the Celtics. (Any enemy of the Lakers is an ally to the Jazz)

Personally I really like the idea of Gordon  Haywardwith the Celtics.  I like his game and I think he could take that game to another level playing beside Rajon Rondo and of course playing for his old college coach Brad Stevens.  But I suppose it depends on the price.

I too don't think Hayward is worth the max.  But he might be worth somewhere around what he was asking for back in October (about $12M a year).

Here's what Zach Lowe said about Gordon's value back in November.

If Hayward jumps a level this season, the Jazz might well value him at something like $12 million per year. A rival team drooling over that jump in play might hit Hayward with the dreaded max offer sheet, but is Utah really going to let Hayward walk away over a $2 million valuation gap? The Jazz are about as flexible as it gets, flush with cap space even after extending Favors. They can afford to swallow hard and overpay. But what if Hayward plateaus? Wing players are everywhere. They can find the market cooler than expected, precisely because they are somewhat fungible unless they bring one or two truly elite skills.

I don't think anyone would argue that Hayward made a jump in play.  More likely that he plateaued a bit.  In fact, when you compare his productivity to Jeff Green, you have to wonder exactly how much of an upgrade (if any) he'd be. 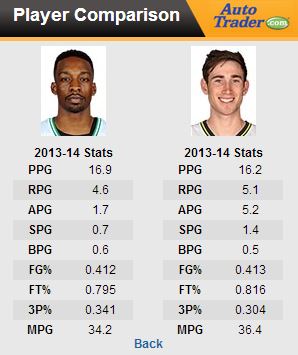 Green may be more inconsistent but averaged out they have very similar stats.  Roughly the same points and rebounds per game and shooting about the same percentage from the field.  Hayward has the edge in assists but Green is the better 3 point shooter.

So is Hayward worth $3M more per year on a longer term commitment than what we are under with Jeff Green?  I'm a lot less sure of that then I was earlier in the season.  Then again, it doesn't have to be a straight up trade of Green (and filler) for Hayward.  It would depend on the value of the trade pieces going in either direction.

Even if the Celtics have no intention of making a play for Hayward, his very presence on the market creates competition if Danny Ainge is looking to find value for Jeff Green (not a given).  The Celtics might like Green but if they draft a 3 and/or pick one up via trade, then they might see him as a movable piece.

I suppose the bottom line that I'm getting at here is that the Jazz could potentially have a big impact on the Celtics offseason.  Perhaps just with what they are trying to do with the number 5 pick.  Or maybe even what their plans are for Gordon Hayward. There's plenty to keep an eye on here in Boston, but keeping one eye on Utah would seem to be wise as well.