Avery Bradley could become a lot better than you think.

Share All sharing options for: Avery Bradley's step back to deep range could make him into a lethal three-point shooter

Last season was a disaster for the Boston Celtics, but positive player development occurred despite the horrific finish. The fire raining down onto the parquet floor in TD Garden was not part of the apocalypse; it was just Avery Bradley draining threes.

Plenty of time has already been spent discussing Bradley's new four-year, $32 million contract, but ignore the dollar figure and instead focus on Avery the player. The important question to ask is: "What kind of player do the Celtics want Avery Bradley to become?"

We got a glimpse of that player towards the end of last season when the 23-year-old guard was a live wire in his last 14 games, hitting 47.1 percent of his 68 three-point attemptsa. Bradley's progression might take a step back during the 2014-15 season, but not in the way that you may think.

That's because Bradley stepped back and launched more above the break (ATB) threes instead of shots from mid-range. Bradley was incredible over this 14-game stretch of the season, sinking a monstrous 57.9 percent of his 38 ATB attempts.

It's a small sample size, but Brad Stevens and the coaching staff clearly want Bradley to become a player that can hit shots from all over the court, which is why he saw his usage change. The last two months were an experimental phase for the Celtics, and Bradley passed with flying colors.

Here's a look at just how much Bradley's usage evolved over the course of the season: 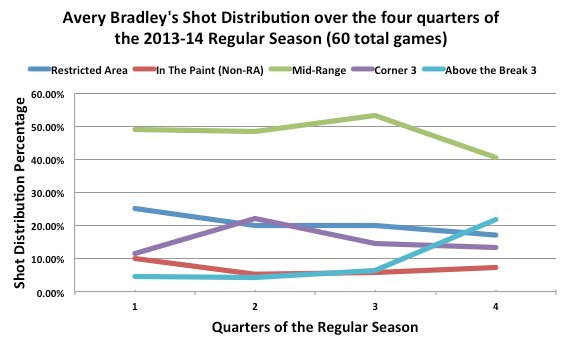 Bradley's change during his final stretch of the season is not a coincidenceb. After attempting 50.4 percent of his shots from mid-range and only 5.1 percent from ATB over his first 46 games, Bradley saw those totals change to 40.4 and 21.8 percent, respectively, during his last 14 games.

Attempting mid-range jumpers at a high rate was an important step for Bradley, since it was essentially a transition period for him before taking the next step to ATB threes.

But it's not like he struggled like so many players do when they add something new to their game. Bradley saw his efficiency rise drastically after his success shooting the three; he had a quality 53.4 eFG percentage to finish the year after hovering at an inefficient 47.1 percent throughout the rest of the season.

No one should expect Bradley to continue draining 47.1 percent of his threes or 57.9 of his ATB threes -- he shot a respectable 36.8 percent from ATB in his first 46 games -- but he should continue shooting them just like the league's best shooting specialists do.

The graph above compares Bradley's shot distribution to some of the league's best two-guard shooters. Players like Wes Matthews and Randy Foye are deadly from outside and Klay Thompson and Bradley Beal are two of the league's brightest young stars, so some may argue that it's not fair to even discuss Avery Bradley in the same breath as them.

But it is fair since Bradley has always been a terrific player going back to high school, when he was ranked fifth on the RSCI Top 25 and first by ESPN's Top 100 in 2009. This is a player who has loads of shooting talent, but has had a lot of bumps along the road, mostly due to injuries.

And clearly the Celtics view him as a player who has yet to reach his potential since they began to use him like a star shooter last season. He was featured from mid-range to start the season and from three towards the end. The graph shows that his "After 3/14" distribution is much more in line with Thompson, Matthews, Foye, and Beal, compared to his "Before 3/14" distribution, which is not even comparable.

It would be surprising if this trend didn't continue in 2014-15, especially after a summer in which Bradley undoubtedly spent time fixing his easily correctable mistakes. Last season 14 of his 28 misses from above the break were front rimmedc, a sign that he doesn't always get his legs underneath his shot. He also occasionally doesn't hold his follow through, which is vitally important to consistency.

Asking Bradley to become another version of Thompson might be outrageous, but he could conceivable reach Matthews' level, a borderline 40 percent three-point shooter, while retaining some of Thompson's ability to shoot off the dribble.

That's precisely why it's crucially important for Bradley to make ATB threes a prominent part of his arsenal, because it will open up a whole new dimension for him. He is already a solid pull up shooter, with a 42.5 eFG percentage on 5.1 attempts per game, according to SportVU, but spreading the floor with ATB threes will give him even more space.

Just think about it. If Bradley is spotting up from three on the left wing, where he shot 58.6 percent last season, defenders will be forced to close out hard on him. Bradley would now have the space to take one or two dribbles and pull up from mid-range for a wide-open jumper.

This is one area that Bradley wasn't able to make plays last season, since nearly all of his pull up attempts came out of the pick-and-roll, where many of his shots were heavily contested. And even though Bradley shouldn't be expected to be a playmaker, more efficient opportunities will be there for him if he extends his range.

Don't be surprised if Avery Bradley exceeds your expectations and leads the Boston Celtics in scoring next season. The organization didn't add a go-to scorer, so someone is going to need to fill it up. If Bradley took care of business this summer, he could very well attempt over 400 threes in 2014, turning himself into a new and improved player.

If that happens, the fire raining down in TD Garden from Bradley's ferocious threes will be a welcome sight for Celtics fans.

a: Some of the recorded three-point attempts are inaccurate, but after watching the film of every single one of Bradley's three-pointers last season, all shot location errors have been accounted for.

b: Even though the term "quarters" is used, the totals are split into sections of 15, 15, 16, and 14 games, respectively, to account for parts of the season, since Bradley missed time. It wouldn't make sense to include his single game from February 9 with the March and April games, so it was tossed into the third quarter.

c: These statistics were recorded after watching film. In addition to 14 front rim misses on above the break attempts, Bradley had three back rims, one right side, four left side, two blocked shots, two air balls, and two rim outs. It was important to record why Bradley missed his ATB threes, instead of just how many he made or missed.