CelticsBlog High Five with Gary Dzen of the Boston.com

"Writers write things to give readers something to read." - William Forrester (from Finding Forrester)

Share All sharing options for: CelticsBlog High Five with Gary Dzen of the Boston.com

Way back in March we kicked off a series called High Five with CelticsBlog where we cornered media folks and asked them 5 questions about the Celtics, their jobs, and anything else that fancied us.  I thought I'd re-start that series starting with one of the nicest guys you'll "meet" on twitter, Gary Dzen of Boston.com.  Enjoy.

1) You've just gotten a new gig at Boston.com as the Associate Sports Editor. First of all congrats! Secondly, tell us a little about it. Who will you be working with and what will you be doing from now on?

Thanks a lot, Jeff. The job is a mix of what I've been doing with more editing. I'll be working with writers like Chad Finn, Eric Wilbur, Zuri Berry, and Steve Silva, as well as our freelancers. Those guys are self-sufficient, but I'm tasked with coming up with ideas to help the site be even more dynamic. I'll be writing as well, though sadly not as much about the Celtics as I used to. Can't reveal too much about the kinds of pieces we'll be doing, but I think people are going to really like it.

2) Any advice to college grads or anyone looking to get into writing for a living?

Run away! No in all seriousness, I've had a blast. My biggest advice is to read good writing, and not just sports. In fact, the majority of what I read is fiction or longform non-fiction. You learn the most about how to write well by reading someone else who does.

As for other practical advice, be willing to be flexible, to take an internship or position that isn't your first choice. You're much more likely to get hired with your foot already in the door, making connections with the people who make those decisions. Everyone wants to write in sports, but show your stuff in another subject and you may just get the chance. 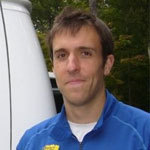 3) Avery Bradley thinks that the Celtics have a chance to make the playoffs. Where do you rate their chances on a scale of "death and taxes" to "so you're saying there's a chance!"

I think you'll agree that it's far from "death and taxes", but in just thinking about this question, I've convinced myself it might not be as far-fetched as I wanted to think. You can envision a team with Rondo, Bradley, Green, Smart, Sullinger, Olynyk, and Wallace staying in a lot of games, the East is terrible, etc. But you know what? I think there's like a two percent chance the Celtics make the playoffs. Maybe one percent. I'm not convinced Rondo is here all season, and I'm not as high on some of the pieces here as a lot of fans are. No playoffs.

4) You have said before that you think the Celtics need to trade Rondo. First of all, you are wrong. However, I will allow you some time to think about how wrong you are and provide a mea culpa. If that doesn't work, I suppose I'll be willing to let you explain your wrongheaded thinking to the CelticsBlog readers, but I'm going to skip your answer.

Hahaha. This is by far my favorite question. I think I've said the Celtics WILL trade Rondo, but I don't believe they should (you can probably do a Google search for what I actually said and put me to shame).  [Editor's note: Gary is correct, see here for video evidence.] The Celtics would be better served with Rondo as one of their 3 or 4 best players. He's by far the best guy they have now, and All-Stars don't grow on trees. The whole question of "building around" Rondo has always been totally bunk, because you build around lots of players, not one. I hope the Celtics keep Rondo, but given that the's their best trade chip, and that Marcus Smart is clearly here for a reason, it seems unlikely.

5) You also run the 99 Bottles blog for the Globe, so I couldn't resist sneaking in a beer question. Here's a fun list of "overrated" beers. Do you agree with most of the items on this list? Also, to tie it back to the Celtics, what are the most overrated training camp storylines? (I'll nominate the annual "player X lost 25 lbs." story)

It's funny I know Will Gordon (who wrote that) a little bit, and he's awesome, and he messes with people, but he's also pretty right with a lot of it. Some of them are spot on: Blue Moon is a much worse Allagash White, Miller High Life is no different than a lot of other cheap beers, Shiner and Yuengling have place-specific ties that make people value them more than they should. I disagree on Old Rasputin and Magic Hat No. 9 (I'm a weirdo for that beer), but we're splitting hairs.

You nailed my No. 1 overrated training camp storyline. No player ever loses weight by sitting around not playing basketball. Other pet peeves:

-- It's a big adjustment for Rookie X (no kidding)
-- Player X who used to be on another team is ready to turn over a new leaf here
-- The same group of guys who stunk last year are closer now, so they're really going to turn it around

Thanks again Gary! (Check out his 99 Bottles Blog here)