In order for Vitor Faverani to stick in the NBA, it might be necessary for him to fix a glaring flaw in his jump shooting mechanics.

Vitor Faverani was an enigma for the Boston Celtics last season, as he seemed to be a "love him or hate him" type of player. Some fans pointed to the team's horrible 94.6 offensive rating when he was on the floor, while others valued his rim protection and knack for stretching the floor with his shot. But when Faverani's season was cut short due to a torn lateral meniscus there was disappointment all around.

Faverani's reported shooting range is something that turned me on about him when the signing was announced last summer. Tall shooters like Vitor aren't exactly rare in the modern NBA, but bigs with his body type absolutely are. He's thick, at 260-pounds, with a wide frame and a long wingspan; it's no wonder that the front office took a liking to him.

The problem is that Faverani has yet to develop a consistent three-ball, despite the fact he's already 26-years-old. After shooting 27.5 percent on 40 attempts last season, according to mySynergySportsa, I decided to look at the film to break down Vitor's shot to project his game going forward, assuming he fully recovers from his injury. 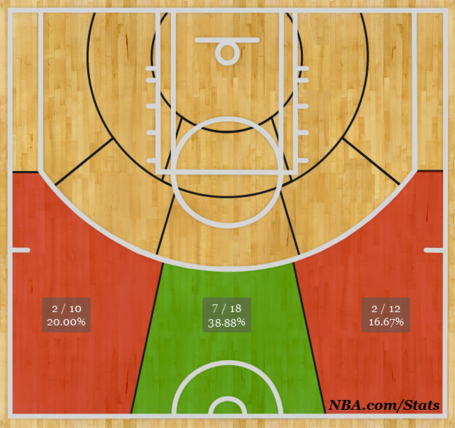 Even though shot charts are valuable in finding out which parts of the floor a player is effective from, it doesn't tell us any information beyond that -- especially for players with sample sizes as small as Faverani's. All that we can really decipher from that image is that the 6-foot-11 Brazilian struggled from the wings, but was deadly from center court.

More specifically, Vitor shot 8-for-21 out of the pick-and-pop, but only 3-for-17 on spot up attempts, according to mySynergySportsb. This is a huge differential in efficiency, but the potential cause isn't very surprising after reviewing the film.

Faverani doesn't dip on his shots, which appears to be his chief mechanical problemc. On his 40 total three-pointers, Vitor dipped only eight times, hitting four of them.

A dip is what it sounds like it is: When a player receives a pass they "dip" the ball down before bringing it back up to shoot. This motion creates momentum and power, which makes it vital ingredient for the success of a shot. Vitor probably shot better off of the screen because he was moving with a natural rhythm, whereas he was stiff on spot ups.

For more information on the dip, click here for a video by Paul Hoover.

Adolescent basketball players are often taught not to dip because of ancient coaching beliefs that were handed down to them, which could've been the case for a young "El Hombre Indestructible." With robotic footwork, slow hands, and no dip, the Celtics big man has developed some bad habits that will be difficult to break.

Faverani had more spot up threes that missed the rim than he had makes. There's probably not another player in the NBA that can say that. Let that sink in.

Six of Faverani's three-pointers didn't even catch iron last year, with four air balls and two clankers off the backboard. That means 15 percent of his attempts didn't even hit the rim; what's even more alarming is that he had more bricks (four) than he did makes (three) on his 17 spot up attempts. Think about it: Faverani had more spot up threes that missed the rim than he had makes. There's probably not another player in the NBA that can say that. Let that sink in.

My concerns with Faverani are that his habits are too deeply ingrained into what makes him a basketball player. It's not easy to make a drastic change at his age, but it might be necessary in order for him to sustain a long career in the NBA.

It's a small sample size of just eight shots, but the fact Vitor hit half when using the dip is an indication that adding it to his form could go a long way in taking his game to the next level.

If the coaching staff needs any definitive proof for teaching the dip, they need only to look at themselves.

Assistant coach Walter McCarty dipped his way to a 34.6 three-point percentage in his 10-year career; head coach Brad Stevens dipped throughout his high school and collegiate career; and Jay Larranaga enjoyed a three-point percentage of 43.5 percent in his career overseas. And perhaps the most accomplished former player in the organization used the dip: Danny Ainge, at 37.8 percent in his incredible 14-year career.

So, why shouldn't the same technique be taught to Faverani, who has already displayed the raw ability to hit shots from outside?

Faverani might have more issues with his shot than the lack of a dip, but it's a start. For example, his eyes may be focusing on the wrong target, which could explain why he's so good shooting from straight ahead and struggles from the sides, but that can only be determined during hands-on instruction.

There's no doubt that Faverani has talent. As mentioned, players his size with that type of shooting potential don't come along every day. But as a fringe NBA player and a possible free agent next summer, it's crucial that he improves in certain areas of his game, with the three-pointer being one of them.

Vitor Faverani might be able to hang around in the league for awhile because of his size, length, defensive potential, and transition scoring ability, but his potential is much greater than that, and it's the coaching staff's job to help him tap into it as much as they can.

a: Every database says Faverani shot 12-for-40 (30 percent) from three, but that is incorrect. He actually shot 11-for-40 (27.5 percent), which has been verified after watching all 40 shots on mySynergySports.

b: Faverani had one transition attempt, which I am re-labeling as a spot up attempt.

c: Every player's dip is different and Faverani's is a bit more subtle. He normally doesn't even bring the ball below his stomach, so anything that appeared to go to the waistline or lower is something I considered a dip.