The importance of being earnest

Share All sharing options for: The importance of being earnest

With a young player, sometimes the worst thing you say about them is that they're good at everything, but not great at anything.  It can be the kiss of death for a lot of NBA prospects.  That kind of meandering talent might you a flyer as a second rounder or a summer league invite or an open ended ticket to play abroad.  And there's the other side of the spectrum where scouts see something in you and expectations become unfair comparisons.  "He has a little bit of LeBron in him, but defensively, he could be a Pippen."

Somehow, Kelly Olynyk has fallen somewhere in between.  Some fans care more about building a time machine than Olynyk's steady development last season so that they can go back to the 2013 NBA Draft and pick superfreak Giannis Antetokounmpo.  "Olynyk's too slow, not strong enough, and not great at anything."  Others (including myself) have already saddled him with the "next" label.  The Next Dirk.  The third Gasol brother.  At worst, Brad Miller.  Even Kevin Love.

But ultimately, KO is KO.  Entering his sophomore season at 23, the truth is we really don't know who he is.  Instinctively, he's still the point guard from Kamloops, BC but a ridiculous growth spurt made him one of the premiere collegiate front court players at Gonzaga.  He's not a true center and he's arguably third on the power forward depth chart behind Jared Sullinger and Brandon Bass (because both are too small to play the 5).  So what do you do with a player that's good at everything, not great at anything, and whose own body confounded him during his basketball development?  Make him a focal point, Brad.

Let's check out Olynyk's improvement in his rookie year.  It almost matches those seven inches he grew in one year, right?  It was rocky at first, but those March and April numbers don't lie.  Per 36 might be fool's gold, but in those final twenty-two games, you're looking at a 20-10-2 rookie who shot 53% from the field, 44% from beyond the arc, and 82% from the line.  As his minutes and usage rate increased over the six months of the season, his eFG% increased from 40% to 59.5% and his TS% went from 40% to 62.5%.

If you caught any of his games at the Orlando Summer League or Team Canada's Euro tour this summer, you know that Olynyk has carried his successlooks slimmer and quicker and even added a Jeff-Bridges-circa-American-Heart ponytail to his game.  It would be hyperbole to suggest that Olynyk will explode on the scene in Year 2, but his skill set will make him a Swiss Army knife in Stevens' motion offense.

Shooting. That's the most striking statistic of KO's numbers down the stretch last season, particularly from 3.  He hit 20 out of 45 and stayed out of the less efficient mid-range.  Take a look at the video.  He's getting those shots in a variety of ways: pick-and-pops, guard down screens, spot ups, and in transition.  To me, that speaks to a higher level of confidence.  A lot of those opportunities are coming naturally out of the flow of the offense, but I think some of them are a little ill-advised, but he's still shooting.  If he can continue at that 35-40% clip, keep shooting, big fella.  That floor spacing will clear the key for Rajon Rondo and Marcus Smart to penetrate with a potential shot blocker out of the paint. 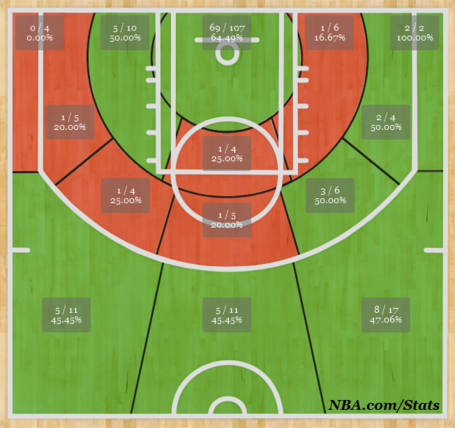 Passing. Back in May, I put together one of those fateful posts where I compared Olynyk to Marc Gasol.  It was about Gasol's ability to be a passing big man out of the high post in Memphis' horn sets.  Forthwith, I'm done with the expectations game, but I'll still use the GIFs from that piece, because 1) they're still relevant and 2) they're against the Lakers (that 4th one is just so pretty).

Why Olynyk's aforementioned shooting is so important is because it opens up so much in the paint.  With Olynyk (and Jared Sullinger in the third GIF) at the high post, Pau Gasol is forced to respect the shot and because of the NBA's illegal defense rules, stay out of the key.  At seven feet tall, Olynyk can act as a lighthouse for cutters and defenders caught fronting on a ball reversal.  Guys like Jeff Green and Gerald Wallace will rack up the points, but Olynyk's vision and point guard instincts are the complementary tools that will free them up for easy buckets.

Dribble (drive). If you've played ball at any level, every coach will tell you the importance of the triple threat position: be ready to shoot, pass, or dribble when you get the ball.  If Olynyk can maintain his jumper and and remains a threat to pass, defenses could choose to play him a little lighter and close out on him.  Well, the Kamloops Kid's also got a handle:

I thought that this would probably be the most unlikely part of Olynyk's game to replicate from last season and yet, it was there two months ago in Orlando.  And before you discount these highlights because they're against summer league scrubs, I'll just say that you need to watch some summer league games; 90% of the players won't even get a sniff in the NBA, but that makes for a dog-eat-dog five-games-in-seven-days grinder where guys are literally playing for their careers.  You don't have the benefit of intricate sets to free up your "best" players or weeks and months of coaching and familiarity with your teammates.
It's difficult to set yourself apart, but there's Olynyk--too slow, not strong enough, and not great at anything--putting up a cool 17 & 7 from a variety of spots on the floor, including driving to the rim on quicker and more athletic defenders.
So, maybe Olynyk isn't the next (insert superstar here) and maybe he's an athletic freak, but just as each element of his game complements another, he'll be able to use his skill set to help out his teammates.  His shot helps Rondo and Smart who help Green and Bradley who can find Kelly at the top of the key for a jumper who can pass up a look and drive to the hole himself.  It's a vicious cycle.  But hey, maybe we just move our home games into this living room and have Kelly bang jumpers from behind the dining table: