Last off-season, Brad Stevens left a situation at Butler where he could recruit and coach players to fit his system. In his first season in Boston, the Celtics were 26th in points per game and 27th in offensive rating. Was it bad coaching or wrong personnel?

First of all, here's the soundtrack for this post.  It'll help.

When Danny Ainge signed Brad Stevens to a six-year contract, he handed him a roster with an All Star point guard, a handful of journeymen vets, Doc holdovers, and some young talent.  What resulted was 25 wins and the franchise's worst offensive season in seven years.  Some will give Stevens the benefit of the doubt with a hodgepodge of players that didn't necessarily complement each other.  Others would rather just forget that the entire season even happened and would be happy if there wasn't a single stat recorded from the 2013-2014 campaign.

However, we know that Stevens is an analytics guy and although the only number that seemed important by season's end was how many ping pong balls Boston would have in the lottery, I'm sure he's spent the summer crunching last year's numbers.  USA Today's Adi Joseph recently ranked the Celtics 29th in his Watchability Rankings and high(low)lighted Jared Sullinger's shot chart from last season:

It's a pretty stark contrast from Sully's reputation as a ground and pound paint presence and flies in the face of what you'd think Stevens would do.  In Sullinger's two-year college career at Ohio State, he averaged 0.7 three point field goal attempts.  Under Doc's strict, role-based style of coaching, he shot five three-pointers total in his rookie season.  That year was cut short by his back surgery, but it's still clear that Stevens encouraged the big man to extend his range.  For Stevens, Sully shot 208 at a 26.9% clip and he wasn't the only Celtic to see an increase from beyond the arc.  I normalized the numbers by taking the Per 36 Minutes stat.

Outside of AB, it's quite a dramatic jump with only Avery getting close to that acceptable 40% shooting percentage.  And ronically, in the 39 games that Jordan Crawford spent in green, the notorious gunner actually held back a little and only shot 4.7 threes vs. his 5.3 career average.  Good luck in China, Steez.  The Celtics were still only 18th in the league in team three-point attempts, but why the steep increase to the team's core players and more importantly, why would a known student of analytics coach his players to do something that's statistically a weakness?

First of all, analytics are only the Ghosts of Seasons Past.  Analytics purists will preach that past is prelude, but things change.  Players get better.  Avery Bradley has promised to be better at the rim.  Sullinger vowed to be in better shape by training camp.  Ebenezer Scrooge works the hitch out of his jumper and maybe he raises his average ten points.

It's natural to think that Boston was actively tanking last season.  Why else would Sullinger shoot 4000% more times behind the three-point line?  Well, because the foundation of some rebuilds needs bricks and for now, the threat of that outside shot and floor spacing is more important than W's.  According to SportsVU, the Celtics averaged 16.9 touches Close Touches per game for 14th in the league with Sullinger accounting for 4.1 touches for 43rd of all players.  His game begs for him to park his butt on the low block, but that hasn't stopped Stevens from trying to make Sully a stretch-4 because a big that can shoot helps the entire team by spacing the floor and pulling shot blockers out of the paint.

One of my favorite Celtics' sets is a simple corner action with both shooting bigs playing above the free throw line extended.  Rondo initiates the action with a dribble hand-off to Olynyk and immediately sets a down screen for Green to flash up to the elbow. 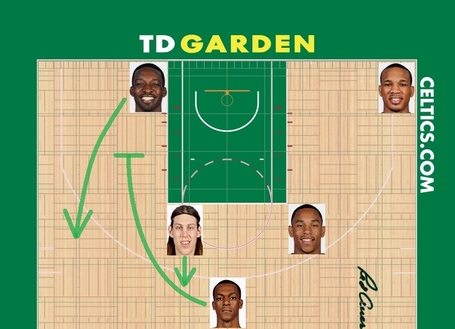 Two options immediately open up.  With Rondo's defender trailing from KO's pick, Green's man must defend the back door roll by Rondo or fight through Rondo's pick and contest Green's three pointer. 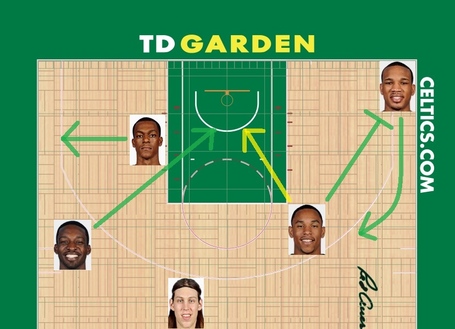 With the defense rotating, Green has the option to penetrate ( Jeff Jeff Jeff please please please penetrate!).  With Olynyk and Sullinger above the free throw line, their defenders are forced to either back peddle back to the rim and protect or stay home on their man.  If Sully's weak side retreats, Sully has the option to either cut and crash the paint for a dump off from Green or down screen for Bradley. 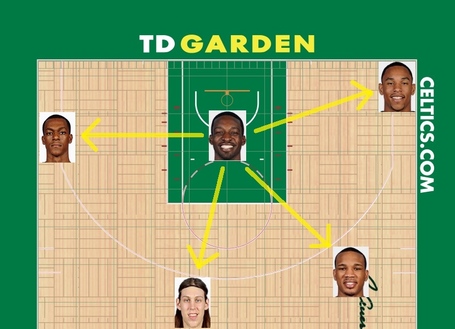 The result is a caved in defense with shooters surrounding the driving Green: the two worse three point shooters are in the more efficient corner pockets (Sullinger and Rondo) with Olynyk and Bradley as potential shooters and re-drivers.  It's not the traditional inside-out game where the ball is thrown into the post to a McHale or a Bird that old school fans are used to, but it's the new NBA.  Big men have to be able to be threats from all over the floor.  It's why Olynyk and Vitor Faverani were targeted after Stevens was hired and drive-and-kick point guard Marcus Smart and sweet shooting James Young were drafted in July.

The 2014-2015 season could be another year of offensive futility, but there's a plan at play here and like Sully says, the players have bought in.  I don't think enough has been made about Stevens' approach to get his players to be better all around.  As aforementioned, Doc was a task master when he was in Boston, but for the most part, he coached a predominantly veteran team.  Stevens is in a position to mold young players and instead of pigeon holing them into roles that scouts or DraftExpress see them in, he challenges them to work on their weaknesses.  One of the newest writers here at CelticsBlog, Daniel Hebert, pointed this out during some internal discussions about Sullinger: