The downside to Marcus Thornton on the Boston Celtics

The newly acquired Marcus Thornton can be a huge contribution to Boston's rebuilding process. But then again, can he?

Share All sharing options for: The downside to Marcus Thornton on the Boston Celtics

Marcus Thornton is a fresh face in Boston after being involved in a three team trade that cleared cap space for the Cavaliers to sign LeBron.  While this deal seemed to benefit the Cavs in that they landed the King, the Celtics came away with a handful of useful talent...Thornton being one of them.

Previously with the Nets, this score first shooting guard can find numerous ways to put the ball in the basket.  And after the Celtics ranked 27th in offensive efficiency last season, they need all the help they can get.

While he used to be more of a slasher than marksman, Thornton redefined himself in Brooklyn, where he increased his 3 point shooting attempts, percentage, and added a bit more extra spacing for the Nets.  Now as a veteran scorer on a team with pass first/ mediocre shooting point guards, not only can he prove his worthiness, but he can create a smooth offense...something the Celtics lacked last season.

While the upside is high, like anyone else, Thornton has his downside.

After some wise acquisitions and a busy free agency, the Celtics have concocted a young and talented front court.  There can be potential found every where you look, from rookies to veterans.

At point guard, Rajon Rondo and Marcus Smart will be carrying most of the load.  Luckily for Thornton, he does not play point guard.  At shooting guard, Danny Ainge seems to have invested in Avery Bradley, and while AB has played point guard in the past, he is not going to be paid 8 million dollars to come off the bench.  So the starting shooting guard spot is Avery's to lose.  James Young is also a valid candidate to play a significant amount of time at shooting guard.  He put on a show for fans at Kentucky and showed his tremendous upside in the March tournament.  Now there is Thornton who struggles with consistency, defense, and age (he is just 27, but his competition is younger than 25).

Now add Evan Turner and Jeff Green in the mix--who can both fill in at shooting guard in big lineups--and that leaves Thornton unable to find valuable floor minutes.

He needs to be on the floor

In Kevin O'Connor's piece about Marcus Thornton, he goes over how he needs to be on the floor to be efficient.  And yes, it is common sense that more minutes opens more opportunities, but when you look at Thornton's numbers, it is hard not to be surprised.

In two of his 3.5 seasons with the Sacramento Kings, Thornton was a huge impact player.  Keep in mind, Thornton broke out his shell after he was traded to Sacramento, but these two years, he averaged 21.3 points and 18.7 points per game.  In both of these seasons, he also averaged well over 30 minutes per game.  And like I said before, more minutes more production, but look at this trend.

Thornton NEEDS minutes to actually be a valuable contributor.  His three point percentage sky rockets, as does his points, and field goal percentage.  With a packed front court, there is no way Thornton averages anymore than 20 minutes per game....unless injuries or trades occur.  Playing Thornton under 20 minutes has shown his inconsistencies.

Despite the lackluster season, the Celtics were actually an above average defense, ranking 13th in points per game allowed.  Now with Rondo healthy (if he stays) and the addition of the offensive disrupting Marcus Smart, as well as acquiring a rim protector in Tyler Zeller, the Celts will look to win some games on defense.  Unfortunately, with all the spacing and shooting Thornton provides, he struggles to be a coveted 3 and D player.  In fact, defense is where he has struggled most of his career.  Zach Lowe of Grantland once said,

"He has never improved as a defender. He still gets lost away from the ball, and he's always spacing out or ball-watching as his man cuts behind him. He has never shown any organized commitment to team defense or help schemes."

Thornton struggles with speed and finds difficulty defending the pick and roll.  These are all correctable mistakes.  However, his defensive IQ is not going to be so easily fixed. 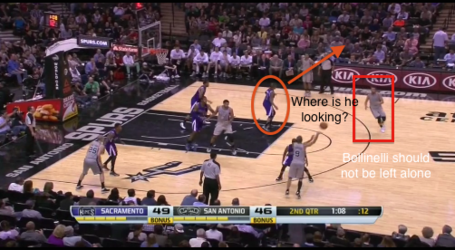 While defending a 3 point specialist like Marco Belinelli, the defender must always remain tight and aware of their surroundings, because if Marco gets the ball in open space, there is no way he is missing.  In this situation, Thornton is guarding Belinelli but gets lost and looses his man.  Marco gets the pass from Tony Parker and makes the three to tie the game 49-49. 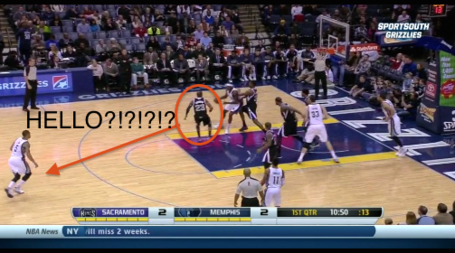 In this scenario, Thornton is assigned to Courtney Lee, a very capable scorer.  When Zach Randolph got the ball down low, Marcus thought it would be a good idea to help out instead of keeping equidistance between Randolph and Lee.  This left way too much space for Lee to catch and shoot early on in the game. 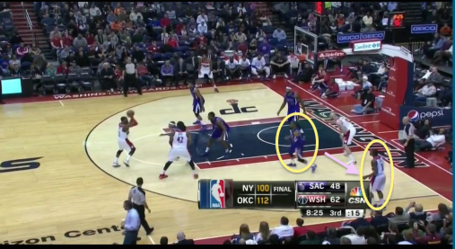 Here, Thornton is guarding Bradley Beal.  He is actually doing a solid job here, playing decent help defense while not committing too much to the middle.  However, the ball handler is just in the middle, not on the opposite side.  Beal is just one pass away, therefore, Thornton should be a bit tighter on the shooter.

Some of his mistakes can be corrected, however, I do not see Thornton as being a much improved defender.  He will get by on his offense.  The Boston front court is extremely advanced in defense with Rondo, Bradley, and Smart, that Thornton should not need to be a defensive specialist.  But that does not mean he can give up such easy baskets as the ones listed above.

Before you accuse me of underrating Thornton and undervaluing him, let me say this.  I really like him.  I think his scoring tendencies will be valuable.  But like many other players, he can be a boom or bust in this Celtics system.  Will he have the floor time necessary for production?  Will he be dealt before the deadline?

He can shoot, score, and run a smooth offense.  But will his weaknesses be exposed?

What do you think?  Let us know in the comments!