Is James Young a shooting guard or small forward?

Which role suits James Young in the NBA?

Share All sharing options for: Is James Young a shooting guard or small forward?

James Young is one of the Celtics' newest additions acquired in the 2014 NBA Draft. He was considered by most to be a sure-fire lottery pick, but an injury sustained in a car crash during pre-draft workouts caused him to slide to the 17th pick, allowing the Celtics to snatch him up. The injury caused him to miss all of summer league, so he has no NBA experience to speak of at this point. Without having a single minute of NBA seasoning under his belt, it is hard to know for sure what position his game will translate to at the NBA level. However, the consensus seems to be that he will rotate between the shooting guard and small forward positions. While I believe that his ability to play both positions will be an asset throughout his NBA career, I'm interested in determining which position will allow him to play to his strengths.

DraftExpress lists James Young at 6'-7" (in shoes) with a 7'-0" wingspan. He was also one of the youngest players in the 2014 NBA Draft not turning 20 years old for another month. That youth will be both a blessing and a curse for the Celtics moving forward. Young's age and lack of NBA experience will make it hard for him to make a major impact as a rookie for a relatively young Celtics squad. Also, his measurements make him somewhat of a tweener when it comes to locking him into a specific position. On the other hand, at only 19 years old, he still has a ton of untapped potential, and his tweener status will allow him to get minutes at two different positions early on in his career. The Celtics are currently deep at both the shooting guard and small forward positions, so the ability to play both will be a huge factor in getting the minutes necessary for player development.

While I realize that early on the emphasis should just be on getting him meaningful minutes, I think it is important for him to establish a specific role. Shifting back and forth between positions will make it difficult for him to establish that role early on, so the best bet long term is to determine which position Young will be most effective at. The NBA is becoming more positionless by the day, but most stars in the NBA become stars because they play their specific position extremely well. That being said, I believe Young's true potential lies in trying to become an elite NBA shooting guard. Whether he has the talent to do that or not remains to be seen, but his physical tools make him a matchup nightmare against most shooting guards in the NBA today.

The physical tools that give Young such an advantage as a shooting guard would make him just average as an NBA small forward. 6'-7" shooting guards with a 7 foot wingspan and above average athleticism are not exactly commonplace in today's NBA. At small forward, he would probably be a little undersized and athletically outmatched. Young was projected to be a lottery pick for a reason. He has two-way upside that very few in the 2014 draft can match. Unfortunately, he has a long way to go before reaching his full potential. He has a good-looking shooting stroke, but it was inconsistent in his lone college season. He also has to tools to be an effective defender, but he was just as inconsistent on the less glamorous end of the floor. Young definitely has the tools to justify his lofty pre-draft status. However, he will have to work on his consistency if he wishes to reach his towering potential. If he can continue to produce plays like the one in the video below on a consistent basis, he will become an instant fan favorite, and it would make it difficult for Stevens to keep him off of the floor.

Although Young's measurements put him in the unenviable tweener category, his game is more suited to playing shooting guard. He is particularly effective in catch and shoot situations. Looking at his shot chart below, he excels when spotting up in the left corner and above the break. This is extremely important for a shooting guard in Stevens' offense, as he will spend a lot of his time in those areas. Playing with guys like Rondo and Smart, he will get his fair share of open looks in both of his hot spots. If he is able to knock down open threes at a high level, it will be hard for Stevens to keep him off of the floor. Stevens spent his first season as a head coach putting an emphasis on taking and making three pointers, so Young can carve out a role early on in his career by making those open spot up opportunities. Young will clearly need to improve on his shooting from the right corner, but that is something that can be worked on specifically in the upcoming training camp. 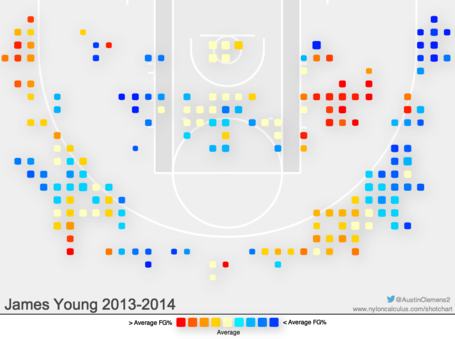 As I stated earlier, James Young's defense at Kentucky was pretty inconsistent. This is something he will definitely need to work on if he wants to play significant minutes in Stevens' system. The NBA is loaded with talented small forwards right now, so we would be putting him in a tough position if we expect him to guard the top tier small forwards right out of the gate. While I expect his defense to improve under Coach Stevens, his added length and athleticism at shooting guard would allow him a little more room for error early on. His upside will ultimately depend on how effectively he is able to play both ends of the floor. Playing at a position where he usually has the physical advantage, he will be put in a situation conducive to success.

I know most Celtics fans do not expect Young to play very much in his rookie, and multiple trips to the D-League are probably in his immediate future. However, he has the upside to work his way into the starting shooting guard conversation. He will have a hell of a battle on his hands wrangling that starting spot away from Avery Bradley and his brand new four year contract, and he will also be battling Marcus Thornton just to become the number 2 shooting guard on the depth chart. Nonetheless, with him being only 19 years old, the Celtics can mold him into the two-way force that they need. With Brad Stevens' guidance, Young can develop within a system that accentuates his strengths as a shooting guard.