Can Rajon Rondo get back to being an elite point guard again?

What can the recoveries of other point guards that have come back from ACL injuries tell us about how Rajon Rondo can bounce back to being among the elite at his position again?

Share All sharing options for: Can Rajon Rondo get back to being an elite point guard again?

They say it can take up to two years for players recovering from ACL surgery to regain their form on the court. Players may recover at different rates, so no two injuries are exactly alike, but there is no doubting that this devastating knee injury is followed by a long road to recovery. Rajon Rondo is still trying to work his way back to becoming the elite point guard he once was and one of the biggest questions facing the Boston Celtics this season will be whether or not he can recapture his spot among the best players at his position.

Rondo injured his right knee during a double-overtime loss to the Atlanta Hawks in January 2013. After consulting with doctors, he was diagnosed with a torn ACL and had surgery to repair the ligament on February 12th of that year. It took him over 11 months before he was able to step on the court in a Celtics uniform again, making his season debut on January 17th. Given that the Celtics were enduring a rebuilding season, they allowed him to take his time getting back and were able to ease him back into action. He played 30 games last season, skipping a few along the way (especially on back-to-backs) and averaged 33.3 minutes per game, but it was clear that he still wasn't himself.

Sure, the assists were still there, at 9.8 per game. His scoring didn't even take that big of a hit, when factoring in his reduced minutes. On a per 36 minute basis he was averaging under one point per game less than he did the previous season and his assists prorated at that level (10.6) matched the previous year. Still, something wasn't right. He was far less efficient on offense, with his field goal percentage plummeting 8% from the previous year - down to 40.4%. He also saw his PER drop to it's lowest level since his rookie season, at 15.3.

Some of that decline has to be attributed to shaking off some rust after nearly a year off. Some will even argue that his production was bound to drop off now that he no longer has the Big Three around to make him look good. But can we really chalk up this decline to those factors and what does this mean for Rondo heading into this season?

To find out, I did some research to find how other under-30 point guards recovering from this injury have fared in their returns. When comparing their per 36 minute numbers before and after their injuries, I found the results to be similar to Rondo's.

Rose was injured in April 2012 and missed the entire 2012-13 season (much to the chagrin of impatient Bulls fans). When he finally did return, his comeback campaign was cut short after only 10 games, when he was shut down with yet another knee injury - a meniscus tear. That gives us a tiny sample size to work with, but you can still see a similar drop in shooting percentage and efficiency. Rose is expected to be ready to start the season this year after helping Team USA win gold in the FIFA World Cup, but his 4.8 points on 25.4% shooting in the tournament shows he's still a long way from rediscovering his MVP caliber form.

Rubio's injury came in March 2012 near the end of his rookie season. At 21 years old, he's the youngest player in our sample, which explains how he was actually able to improve in some areas following his return. You would expect a young player to show progress in their second season, particularly one that had to deal with adjusting to coming from overseas. He was also the quickest to recover from the injury, returning December 15th of that year - only about 9 months after the injury occurred.

Arenas actually tore his MCL, which is another knee ligament injury of similar severity. He went down with the injury near the end of the 2006-07 season and returned in April 2008 after about a year off, playing in only 8 games. Unfortunately his career began to unravel from there, as he played only two games the following season due to other injuries and 32 games before his 2009-10 season ended with a suspension stemming from an incident involving bringing guns to the arena. By the time he returned, he was never the same player again.

What does the data tell us?

Interestingly enough, none of the players in our sample showed meaningful declines in hustle stats, such as rebounds and steals. The biggest decline any of these players faced upon their return was with their shooting percentages. While you would assume that rust would be the primary reason for that, I dug a little deeper and found there was a bit more to it. Most of the players sampled showed a decrease in the percentage of shots inside 3 feet of the basket. Rondo in fact had the most drastic drop, going from 36.3% of his shots coming from that close range down to 32.6% following his injury. Rose and Arenas also followed this trend, with a noticeable increase in mid-long range jumpers.

At his peak, Rondo was able to get to the rim almost at will, while converting at an above average rate. Yet his shot chart from last season shows that he struggled in the paint and had to settle for more jump shots. The silver lining is that it helped him develop a strong mid-range shot, but if he can combine that the ability to attack the rim the way he used to, it will make him a nightmare to defend. 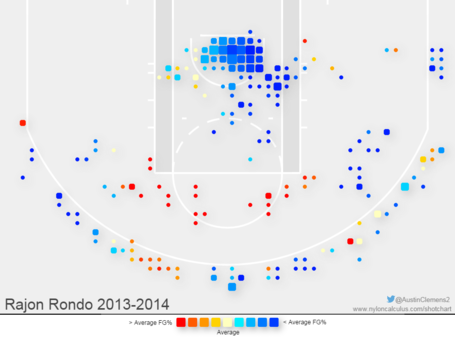 The changes in their shot selection could be attributed to difficulty getting to the rim. Many players that have recovered from this injury say that even when they are physically able to get back on the court, they aren't necessarily mentally prepared for it. They often have issues trusting their bodies to react the way they are used to, which can cause them to become hesitant to attempt the same cuts and quick moves they once made with ease. If they find they no longer have the same explosive step or just don't trust themselves to make it yet, they may no longer be able to blow by their defender. If their drive to the hoop is cut off, it would force them to settle for jump shots instead, which explains the drop in percentage of shots at the rim.

The outlier of the group is Rubio, who actually increased his percentage of shots at the rim from 24.9% to 31.7% after he returned from his injury. As mentioned, Rubio was younger than anyone else in our sample and we would expect a player to improve following their rookie season anyway. Rubio's quick return also meant that he was able to play 57 games in his return season, which gives us a larger sample size. This is actually good news for Rondo, as Rubio provides a positive example of how a player can regain their form and even improve after suffering from this devastating injury.

So will we see the REAL Rondo this season?

The evidence certainly suggests that the Rondo we see this season will be an improvement over last year's sample. The news that Rondo suffered a broken hand that required surgery last week is an unfortunate setback, but not one that should drastically alter his outlook for the season. If he returns within the 6-8 week time frame then he shouldn't miss too much of the regular season, so despite suffering another injury just like Rose and Arenas did, Rondo is still closer to Rubio's end of the spectrum.

By the time the season starts, Rondo will have had about 20 months since his surgery. Physically, he'll be ready to go and a full off-season of workouts should have him more mentally prepared than he was while easing himself back in last year. A slow start wouldn't be a surprise, but by mid-season he'll have reached that two year window that is often cited as the point players finally feel like themselves again on the court.

Fueled by a contract year, Rondo will be out to prove he's worthy of a max deal. With the injury far enough in his rear view mirror, he'll reclaim his spot among the league's elite point guards.