The Boston Celtics signed Chris Babb to a 10-day contract in February when their backcourt was hammered with injuries, but with an influx of new talent there might not be enough roster space for the 24-year-old to make the team.

But the Celtics do like what Babb brings to the court considering his productive history shooting the three and defending, making him a potential "3-and-D" candidate.

"[Babb is] a perfect fit for what we need," Brad Stevens said after a game this past season. "He's going to come in, get open shots, hopefully knock those open shots down."

The problem is that Babb didn't hit open shots last year, as he was 22.2 percent on his 27 three-point attempts. Those struggles carried over to the Orlando Summer League, where Babb shot a dismal 3-of-16 from downtown.

But that is a small sample size, especially considering he drained 35.4 percent of his threes with the Maine Red Claws after having so much collegiate success. Maybe Babb's nosedive in production was just a major slump. 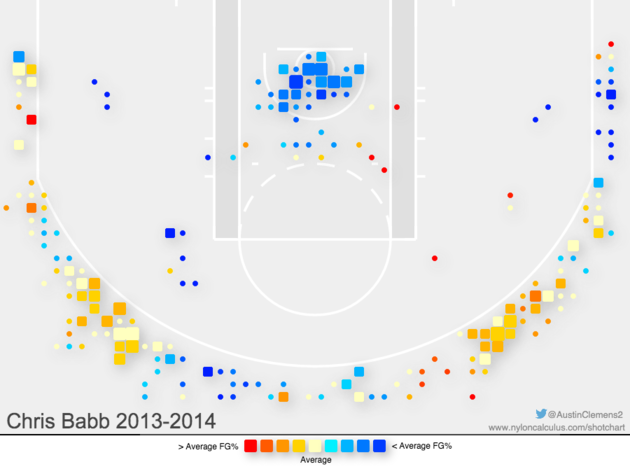 Shot chart created by Nylon Calculus' Austin Clemens. The larger the block, the higher the frequency of shot attempts from a particular area. The redder it is, the better the percentage, and the bluer it is, the lower.

There's not a lot of red on that chart, but there is plenty of yellow and orange near the wings, which means he was above average from those areas of the court. However, he appears to be extremely inconsistent from most other spots. Here's a closer look at the efficient regions: 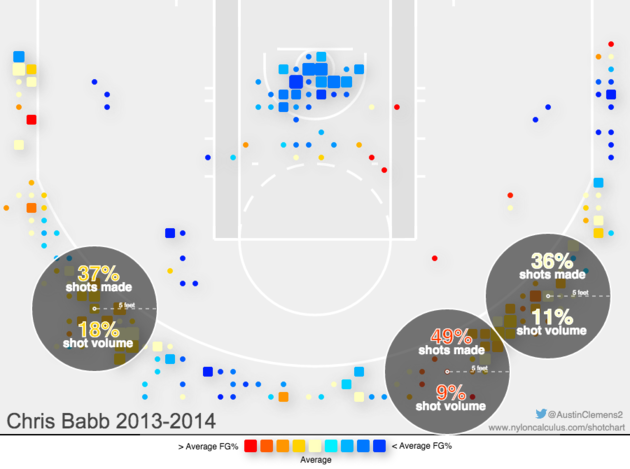 Babb shot approximately 39.3 percent from the circled areas of the shot chart, which made up 38 percent of his distribution. If Babb has any chance of sticking in the NBA, he's going to need to sustain a rate similar to this.

But it's also crucial that he hits from this specific area of the court. If he's only standing in the corner, he's not spreading the floor like he can when he's hovering around on the wings. Even though a three-pointer counts as three points regardless of the spot, a shooter is more versatile and creates more spacing when they can hit from above the break.

Considering his effectiveness from those areas, the Celtics used him in exactly that way during his 14-game stint last year. 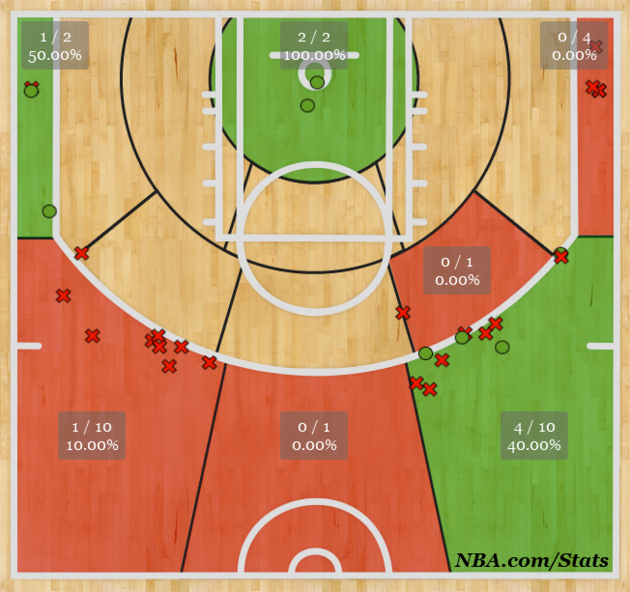 From his wing hot spots in the D-League, Babb managed to shoot just 20 percent in the NBA. But the results are even troubling than the shot chart indicates, since he had a handful of air balls and a bunch of his attempts clanked off the left or right side of the rim. This suggests that something was seriously wrong with the mechanics in his fingers, especially since they are otherwise flawless.

With seven threes coming off screens and 12 spot-up attempts, according to mySynergySports, Brad Stevens used him like a sharpshooter during his limited minutes on the floor, but he was unable to come through. This was Babb's rookie year and many players take awhile to make the mental adjustment, but no matter how you slice it, he needs to be better.

Fortunately, it's an incredibly small sample size, which works in Babb's favor. 27 attempts aren't nearly enough to get a true read on a player, but for fringe NBA prospects it's crucial that they take advantage of their scarce opportunities.

With Marcus Smart, Evan Turner, Gerald Wallace, James Young, and Chris Johnson all vying for playing time behind the starting wings, it will be extremely difficult for Babb to crack the final 15-man roster.

Unless he explodes with a barrage of threes in the preseason, it appears inevitable that the Boston Celtics will relegate him to Maine with the possibility of signing another 10-day contract during the season. But with so much young talent ahead of him on the depth chart, it might be in Chris Babb's best interest to seek more fruitful opportunities because he certainly has enough talent to make it in the NBA.