The Celtics host the Eastern Conference leading Atlanta Hawks in the midst of more trades and roster turmoil.

The Celtics host the Eastern Conference leading Atlanta Hawks in the midst of more trades and roster turmoil. On Monday word came out that the Celtics are trading Jameer Nelson to Denver for former Celtic Nate Robinson, who they are expected to buy out. They are also rumored to be working on a buy out with Tayshaun Prince. It is also rumored that Austin Rivers could be on his way to the Clippers for unnamed expiring contracts and a draft pick. None of them are expected to play for the Celtics in this one.

The Hawks come in having won 9 games in a row and also 9 straight on the road. They are 14-5 on the road while the Celtics are 9-11 at home and working on a modest 2 game win streak. This is the second of 3 games between these two teams. The Hawks won the first meeting in Atlanta 109-105. They will meet once more in Boston on February 11.

The Hawks are playing in the second of back to back games, having played in Philadelphia on Monday night. However, they were able to rest 3 of their starters, who should be rested and raring to go for this game. DeMarre Carroll, Jeff Teague, and Paul Millsap all sat out the game and in spite of missing 3 starters, they still were able to blow out the Sixers 105-87. 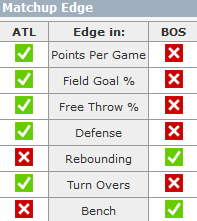 Evan Turner vs Jeff Teague
Once again, Turner will have a height advantage but Teague has an advantage in just about everything else. He is averaging 17.4 points, 2.8 rebounds, 7.2 assists, and 1.8 steals per game. Turner and Smart need to slow him down from from scoring and from getting the Hawks into their offense quickly.

Jared Sullinger vs Paul Millsap
It doesn't get easier for Sully who goes from having to play against Anthony Davis to having to matchup up with Paul Millsap. Millsap is averaging 16.9 points, 7.9 rebounds, 3.1 assists and 1.8 steals. He will be a handful and Sully is going to need to play hard on both ends of the court to keep Millsap in check.

Honorable Mention
Tyler Zeller vs Al Horford.
Horford is having a very good year and will be a handful for Zeller to matchup with. He is averaging 14.6 points, 6.5 rebounds and 1.4 blocks a game. He is one of the 2 starters who didn't get a rest in Monday's game and finished with his first career double of 21 points, 10 rebounds and 10 assists.

Keys to the Game
Play 48 Minutes - The Celtics have periods where they play great and then they have stretches when they can't hit a shot and can't defend and turn the ball over on every possession, most notably in the 4th quarter. They have to find a way to be consistent from start to finish, especially down the final stretch of the game. The Hawks are one of the best 4th quarter teams in the league, averaging 26.0 points. If the Celtics let up, the Hawks will make them pay.

Defense - The Hawks shoot a lot of 3 pointers. They are 8th in the league attempting 24.8 3-pointers a game and they are 7th in the league, making 9.6 3's per game. They have several good shooters from distance, especially Kyle Korver who leads the league in 3 point percentage at 52.4%. The Celtics must up their perimeter defense if they expect to hang with the Hawks. They also have to defend the paint better with Millsap and Horford and Teague all very good at attacking the basket.

Rebound - The Celtics must crash the boards as a team, especially the guards. Rebounding takes effort and the Celtics must be the team that wants the win more and they must win the rebounding battle.

Focus - The Celtics have to stay focused and not let the Hawks defense (or all the trades) throw them off their game. They have to focus on making good passes and on moving the ball to find the open man. They have to keep that focus throughout the game and not let up and not get flustered.

X-Factors
Home Game and Effort
The Celtics are home and after the win over the Pelicans, Jae Crowder mentioned how the crowd gives them energy and pushes them to play harder. They should get a boost from the home crowd in this game as well. If the Celtics come out with the same effort they brought against the Pelicans, the game will be competitive at the least. Also it's possible that the Hawks will underestimate them and not bring their own best effort.