The Celtics look to get back on track as they host the Chicago Bulls for the 4th and final meeting this season.

Share All sharing options for: Celtics and Bulls clash for the 4th and final time this season

Doug McDermott (knee) and Mike Dunleavy (ankle) are listed as out in this game. Joakim Noah is dealing with a hand injury and then rolled his ankle in Wednesday's loss to the Wizards and was ruled out for this game this morning. Both Kirk Hinrich (hamstring) and Taj Gibson (thumb are probable). I'll take a guess that Nikola Mirotic will start at power forward and Pau Gasol will move over to center. Just a guess, though.

The Celtics may be catching the Bulls at the right time. They definitely lose a bit of their defensive swagger without Noah in the lineup. They have also been in a bit of a slump. They have lost 4 of their last 5 and have only averaged 94.2 points over those games. They have also allowed 102.4 points over those 5 games. Or, maybe they play like a wounded animal and the Celtics take them lightly, which would be a big mistake.

For the Celtics, James Young and Jared Sullinger missed practice on Thursday with an illness of some type. They are expected to play but are listed as day to day. Evan Turner injured his thumb in the loss to the Hawks and is also listed as day to day. The newest (and former) Celtic, Shavlik Randolph may or may not be with the team for this one.

Players Who May or May Not Even Be Celtics at Gametime
Tayshaun Prince (From Grizzlies and Buy Out???
Shavlik Randolph (May or may not be here)
Chris Douglas Roberts (probably not but who knows???) 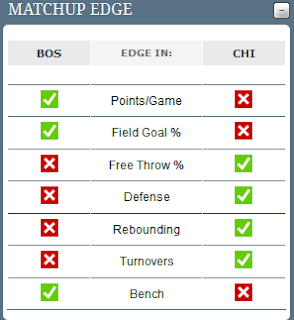 Tyler Zeller vs Pau Gasol
Things got a little easier for the Celtics with the announcement that Noah will be out for this game. But Pau Gasol is dangerous and has been playing very well. Gasol is averaging 18.8 points, 11.3 rebounds and 2.14 blocks per game. Zeller will have his hands full trying to contain Gasol.

Avery Bradley vs Jimmy Butler
Butler is playing about as well as anyone in the league. He is averaging 20.7 points, 6.1rebounds, 3.3 assists, and 1.7 steals. Avery will have his hands full trying to slow Butler down but slowing him will be key to getting a win against the Bulls.

Honorable Mention
Evan Turner vs Derrick Rose
After struggling for much of the season so far, Derrick Rose is coming off his best game of the season, scoring 32 points vs the Wizards. The Celtics may or may not have Evan Turner for this one. If Turner isn't able to play, expect Marcus Smart to get the start in his place.

Rebound - The Celtics can't score if they don't have the ball. Rebounding will be tough against Chicago's big front line, but much of rebounding is effort and desire and so the Celtics must put out the extra effort on the boards to give themselves extra possessions as well as to limit the Bulls fast break opportunities and second chance points. The Bulls are a good rebounding team, pulling down 45.3 per game, which is 4th best in the league. The Celtics have to match their effort on the boards.

Limit Turnovers - The Celtics are averaging almost 15 turnovers per game, which is too many. They also seem to go through spurts in the game when they lose focus and have a flurry of turnovers. With a young team and with all of the trades, some turnovers are to be expected, but they have to take better care of the ball and also keep their focus better throughout the game if they want to win this one.

Play 48 Minutes - The Celtics seem to play very well at times, sometimes starting off strong and sometimes finishing strong. But then at other times, they seem to fade away and can't seem to do anything right. They have to make an effort to play hard and keep their focus from the starting tip until the final buzzer.

X-Factors
Focus and Injuries
You wouldn't blame the Celtics for struggling with staying focused. They have had teammates traded and there are questions as to who will be a Celtic from day to day. They are also one of the youngest teams in the league and young players struggle with focus at times. If they can stay focused they may have a chance. Also, injuries may play a role in the outcome. The Bulls will be missing 2 of their starters with Noah and Dunleavy out. The Celtics may be missing their starting point guard. Either way, the Celtics can't afford to take this team for granted, even with the injuries.

In the past, Goble has been good in some games and terrible in others. He was the referee who called the clothesline on Barbosa in a Nets game 2 seasons ago a regular foul. He also called a foul at the end of that game on an obvious clean steal that could have changed the outcome of the game. In a Clippers game last season, he ignored fouls by the Clippers and called phantom fouls on the Celtics all game. Tommy made the comment that the Celtics had no shot to win after the officiating took over. The Celtics are 2-0 this season and 5-5 in their last 10 games with Goble and the Bulls are 0-1 this season and 7-3 in their last 10. His home W/L record is 17-14.

Derrick Collins
Derrick Collins has officiated 806 regular season games and 14 Playoff games in 13 NBA seasons. Prior to joining the NBA, he officiated five seasons in the CBA where he worked two Finals, and three seasons in the WNBA, working three WNBA Playoffs and Finals. He has seven years of collegiate officiating experience in various conferences (Big 12, Sun Belt, Conference USA, Southland, SEC, TAAC, OVC and SWAC), and he officiated a Southland Conference semifinal game. Collins also officiated at the high school level in Louisiana. There is very little controversy around Collins. The Celtics are 0-2 this season and 4-6 in their last 10 games with Collins while the Bulls are 3-1 this season and 6-4 in their last 10. His home W/L record this season is 15-16.

Kogut has called games that favored the Celtics and some where the Celtics couldn't get a call and some others where they were called evenly. I guess it depends on his mood. The Celtics are 2-2 this season and 3-7 in their last 10 games with Kogut. He called the loss to the Cavs earlier this season where the game was called evenly through 3 quarters and then completely one sided for the Cavs in the 4th quarter. -He ignored a push off and elbow below the belt by LeBron on Green and instead called the foul on Jeff Green. Cleveland shot 37 free throws to 23 for the Celtics. The Bulls are 3-0 this season are 9-1 in their last 10 games with Kogut. His home W/L record is 13-14