The Celtics begin a 12 day and 6 team road trip with a matinee game against Doc Rivers and the Los Angeles Clippers.

Share All sharing options for: Celtics begin 6 game road trip with a matinee game vs Doc Rivers and the Clippers The Celtics begin a 12 day and 6 team road trip with a matinee game against Doc Rivers and the Los Angeles Clippers. The Celtics are looking to end a 2 game losing streak while the Clippers are coming off a win over the Kings on the road but have lost their last two games at home.

There is no shortage of story lines for this game. Doc Rivers was the Celtics coach from 2004-2013 and led them to a championship in 2008. Brad Stevens took over as coach when Doc decided he'd rather coach stars than a rebuild. Also, Big Baby Davis was traded from the Celtics for Brandon Bass and there may be a bit of a rivalry there. Finally, there is Austin Rivers, who briefly was a Celtic before being traded to play for his dad on the Clippers.

Both Tayshaun Prince and Shavlik Randolph practiced with the team on Sunday and both are expected to be available for this game. James Young missed the last game with the flu and is expected to miss this game as well. The Clippers have no injuries listed. 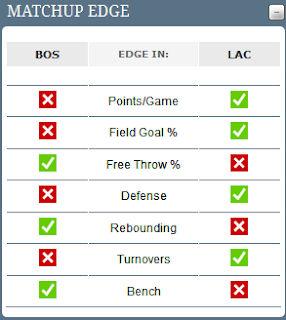 Evan Turner vs Chris Paul
Evan Turner has been doing a decent job of running the point for the Celtics, but it's safe to say that he's no Rajon Rondo. Chris Paul, however is one of the top PG's in the league and Evan's job just got a lot harder. Paul is averaging 17.8 points, 4.6 rebounds and 9.7 assists, which is good for 4th in the league. He also leads the league with a 4.68 assist to turnover ratio.

Honorable Mention
Avery Bradley vs JJ Redick
Redick is always a threat to have a big game. He is averaging 15 points, 1.7 rebounds, and 1.6 assists. He is shooting 43.25 from beyond the arc. If the Celtics leave him open, he will make them pay.

Brad Stevens vs Doc Rivers
The new coach vs the previous coach. Doc won the first two meetings with his former team last season. Can Brad get the upper hand in this one?

Rebound - The Celtics can't score if they don't have the ball. Rebounding will be tough against the Clippers but rebounding is effort and desire and so the Celtics must put out the extra effort on the boards to give themselves extra possessions as well as to limit the Clippers fast break opportunities and second chance points. The Clippers will easily turn rebounds into points.

Limit Turnovers - The Celtics are averaging almost 15 turnovers per game, which is too many. They also seem to go through spurts in the game when they lose focus and have a flurry of turnovers. With a young team and with all of the trades, some turnovers are to be expected, but they have to take better care of the ball and also keep their focus better throughout the game if they want to win this one.

Play 48 Minutes - The Celtics seem to play very well at times, sometimes starting off strong and sometimes finishing strong. But then at other times, they seem to fade away and can't seem to do anything right. They stayed with the Bulls through 3 quarters, but then seemed to fall apart. They have to make an effort to play hard and keep their focus from the starting tip until the final buzzer.

X-Factors
On the Road and Focus
The Celtics have not played all that well on the road this season with just 4 wins out of 12. Young teams seem to struggle with focus especially on the road. They need to keep their focus and tune out all the distractions that come with playing on the road.

Monty McCutchen
Monty McCutchen has officiated 1,244 regular season, 111 playoff, and 10 Finals games. He worked the 2007 NBA All-Star Game in Las Vegas and was a member of the crews that officiated the 1996 and 1997 Mexico Challenges, as well as the 1998 Schick Rookie Game. Prior to joining the NBA, McCutchen spent four seasons in the CBA, where he worked the All
Star game his second year and the playoffs all four years. He also officiated the CBA Finals the last three years he was with the league. McCutchen missed the 1998-99 season with a ruptured Achilles tendon.

The Celtics are 0-1 this season and 5-5 in their last 10 games with McCutchen on the court. Most of his games with the Celtics have been well officiated but there have been a few head scratching calls as well. He was the lead ref in one of the worst officiated games I've watched in a long time. In the LA Lakers vs Golden State Warriors, the Lakers shot 50 free throws to 16 for the Warriors in a 2 point LA win. It was a key game for the Lakers playoff hopes and the referees literally gave them the game. One play in particular stands out to me. In the final minutes with the game tied, Steph Curry was called for an offensive foul on Dwight Howard, when it was clearly a foul on Howard. The worst part is that they put Steve Blake, a very good free throw shooter, on the line instead of Dwight, even though Blake wasn't involved in the play. It truly was a travesty. It just proves that when they have an agenda, they will go to extreme lengths to accomplish it. So, I guess the bottom line is that McCutchen can be very good, but he also can be very bad. The Clippers are 2-1 this season and also 5-5 in their last 10 games with McCutchen. His home W/L record this season is 17-13.

Sean Corbin
The 19-year NBA referee has officiated 1,120 regular season NBA games and 54 Playoff games, along with the 2007 NBA All-Star Game, 1999 Japan Games in Tokyo and the 1996 Schick Rookie Game. Corbin spent the summer
of 2004 officiating basketball at the 2004 Olympic Games in Athens. Corbin’s resume includes four years officiating in the CBA and nine years of collegiate officiating experience in the Big East, Southern, Southeastern, Mid-Eastern Athletic and Metro Atlantic Athletic Conferences. He also has four years of high school basketball officiating experience. Corbin has been good in most of his games with the Celtics without any bad games standing out until this season. In the game vs the Pacers, there were a lot of terrible calls down the stretch including an out of bounds call that was obviously wrong and gave the game to Indiana. The Celtics are 1-3 this season and 3-7 in their last 10 games while the Clippers are 0-1 this season and 6-4 in their last 10. His home W/L record so far this season is 18-15.

Justin VanDuyne
Justin VanDuyne is one of three new officials for the 2014-15 season. VanDuyne joins the staff after four seasons as a referee in the NBA D-League, already having officiated 16 regular season NBA games as a non-staff official. Prior to joining the NBA, Van Duyne officiated in numerous college conferences including the PAC-12, Mountain West, Big West, WCC, and WAC. The Raptors are 1-3 with Van Duyne while the Celtics are 0-3 for his career. His home W/L record this season is 11-15.