Rondo returns to the Garden as the Celtics host the Mavs

The Celtics welcome Rajon Rondo and the Dallas Mavericks to the Garden for the first time since the trade.

Share All sharing options for: Rondo returns to the Garden as the Celtics host the Mavs

The Celtics welcome Rajon Rondo and the Dallas Mavericks to the Garden for the first time since the trade. It's bound to be an emotional night, not just for Rondo and his former teammates, but also for Jae Crowder, Brandan Wright and Jameer Nelson, who will also be facing their former team for the first time.

I imagine that there will be a video tribute and a standing ovation for Rondo when he is introduced. These festivities will be a distraction for both teams. Wright, Nelson and Crowder don't have to worry about returning to Dallas this season as the Celtics have already visited the Mavericks back in November.

Evan Turner started at the point in the Celtics' last game and after the team's success in that game, it's difficult to picture coach Stevens changing the starters for this game but it's possible that he may switch the lineup once again. Lost in the Rondo hoopla will be the fact that Dwight Powell will also return to face his former team as well.

The game was changed from League Pass to NBA-TV right after the trade so, as if things weren't bad enough, we will get National TV Rondo for this one. 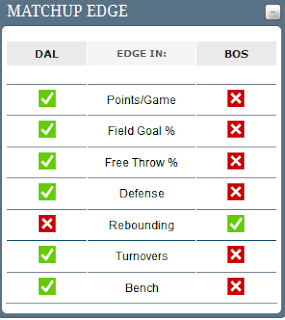 Jared Sullinger vs Dirk Nowitski
This will be a tough matchup for Jared in that Dirk is very mobile and can score from both inside and out. Dirk is averaging 18.7 points, 5.9 rebounds and 2.2 assists per game. Sully broke out of his mini slump in the last game and hopefully will continue to play well in this one.

Avery Bradley vs Monta Ellis
Ellis is the Mavs' top scorer at 20.6 points per game. Avery will need to use his reputation as a defensive stopper to slow him down. If Avery can't get the job done, perhaps Marcus Smart will get some time guarding him.

Honorable Mention
Evan Turner vs Rajon Rondo
Turner has a size advantage over Rondo, but that's about it. Even though he will be emotional about his return to the Garden, Rondo has much to prove to his new team, and perhaps to his former GM. I expect him to put on a show for the fans and Evan Turner will have to do the best he can to slow him down.

Defense - Defense is always crucial to getting a win. Defense wins games is not just a cliche, it is a fact. The Celtics must play tough team defense especially against high scoring teams like the Mavs who average a league leading 109.6 points per game. Neither team has been a defensive juggernaut with the Celtics allowing 103.7 points per game and the Mavs allowing 102.7 points per game. The team that clamps down on defense will get the win.

Play 48 Minutes - The Celtics have got to come out strong and play hard from start until finish. Against a team like the Mavericks, they can't afford to dig themselves into a hole or to allow the Mavs back into the game if they get a lead. They have to play hard for all 48 minutes.

Take Care of the Ball - The Celtics have to move the ball and have to set the pace but they also have to limit turnovers. They seem to lose focus at times and turn the ball over too much. They have to take care of the ball because the Mavs will make them pay if they turn it over.

X-Factors
Team Swap and Distractions
There will be distractions for Rondo, Powell, Nelson, Wright and Crowder all playing against their former team after the recent trade. Whether that makes them play better or worse is the question.

He was lead official in the Nets game that resulted in a brawl the season before last. Capers gave Doc a T for yelling to Rondo. They let the Nets get away with pushing and shoving and hard fouls the entire first half. The Nets shot 17 free throws to 5 for the Celtics in the first half and 3 of those free throws were on technicals. They did better in the second half after the brawl, but the refs' failure to call the game evenly in the first half led to the fight. The Celtics are 0-2 this season and 4-6 in their last 10 games with Capers. The Mavs are 1-0 this season and 8-2 in their last 10 with Capers. His home W/L record this season is 15-10.

Karl Lane
Karl Lane enters his fourth year having officiated 159 regular season games. Lane’s experience includes four seasons and 167 games officiated in the D-League. He also has four seasons of NBA preseason game experience and worked in NBA summer camps for six years. In addition to his professional experience, Lane officiated collegiate games for nine years in the SWAC and Gulf South Conference and has nine years of high school officiating experience. Lane isn't one of Tommy's favorite refs. Two seasons ago vs the Cavs, Lane got under Tommy's skin a bit and after 3 bad calls in a row, Tommy said "This guy doesn't have a clue. His name's Lane. They should show him the highway." In a win over the Bulls, the officiating was terrible and Lane once again got under Tommy's skin after 3 terrible calls in a row. Then to top it off, with 6.2 seconds left, he made another bad call that fouled Avery out, prompting Tommy to yell" I don't recall a game when there was such a plethora of terrible calls throughout." The Celtics are 0-1 this season (the loss was in the first Mavs game this season) and 4-6 in their last 10 games with Lane while the Mavs are 3-0 this season and 5-5 in their last 10. Lane's home W/L record is 13-9.

Sean Wright
Sean Wright has officiated 532 regular season and 12 playoff games in his nine seasons. Prior to joining the NBA, Wright was an official in the NBA D-League, where he participated in the Playoffs in 2004 and the Finals game in 2005. Wright’s collegiate officiating experience includes working in the SEC, Colonial, Big South,
Southern, Ohio Valley, Atlantic Sun and Southwestern Athletic Conferences. It was Sean Wright that Rondo threw the ball at resulting in his ejection and suspension in 2012. In one game with Wright last season, a loss to Philly, Tommy called him an idiot after one particularly bad call. The Celtics are 1-2 this season and 2-8 in their last 10 games with Wright while the Mavs are 7-3 in their last 10. His home W/L record this season is 14-10.