Celtics continue brutal road trip with a visit to the Trailblazers

Celtics face the Trailblazers for the second and final time as they continue their brutal West Coast trip.

Share All sharing options for: Celtics continue brutal road trip with a visit to the Trailblazers

The Celtics begin one of the toughest stretches of games of any team this season as they take on the Portland Trailblazers. This is the first of back to backs as they will head to Denver for a game on Friday. Then one day off and another back to back set against the Warriors and the Jazz. They will play 4 games in 5 nights and travel 3,101 miles and cross a couple of time zones in the process.

Entering this game, they have had a couple of days off after their Monday afternoon loss to the LA Clippers and so hopefully will be rested and refreshed after a rare practice and a couple of days in Los Angeles. James Young was back at practice, but is still not 100% isn't expected to play in this game. The Celtics have lost 24 games in a row against Western Conference teams on the road and are looking to break that streak on this trip.

The Celtics may catch a break in that the Blazers are playing in the second of back to back games and had to travel back from Phoenix after a tough road loss. Also, LaMarcus Aldridge injured his hand in Monday's win over the Kings. He isn't expected to play in this one and that will make things a bit easier for Jared Sullinger. The Blazers are 3-2 without Aldridge.

The Trail Blazers have dropped four of their last five games. Portland has been tough defensively for most of the season, allowing opponents to shoot just 29.8% from beyond the arc. However, in their last 5 games, they have allowed opponents to shoot 37.7% from beyond the arc. They have also given up 100-plus points in each of their last 5 losses after allowing opponents to reach 100 points just four times in their previous 20 games. The Celtics might just be hitting them at the right time to steal a win in this one. 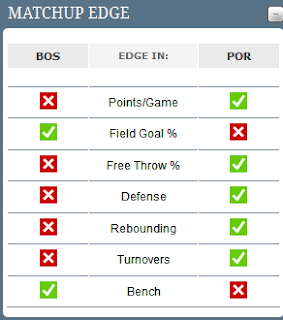 Evan Turner vs Damian Lillard
Damian Lillard is playing very well and will be a tough matchup for Evan Turner. Lillard is averaging 22.1 points, 4.7 rebounds, and 6.2 assists per game. Turner has a height advantage but that's about it. But slowing Lillard down will be key to the Celtics being able to stay in this game.

Avery Bradley vs Wesley Matthews
Matthews is averaging 16.3 points, 2.3 assists, and 3.4 rebounds. He is capable of putting up a lot of points in a hurry if the Celtics don't slow him down.

Keys to the Game
Pace and Space - The Celtics must push the pace of the game as that may be the only way they have a chance against this tough Blazers team. They also have to move the basketball without turning it over to get open shots.

Rebound - The Celtics must make an extra effort to grab rebounds in order to give themselves extra possessions as well as to keep the Blazers from cashing in with second chance points. In their first meeting this season, the Blazers out-rebounded the Celtics 55-46 and the Celtics have to do better in this game.

Defense - The Celtics have been able to score for the most part, but they have been failing on defense. They must play tough in your face defense. They have to do a better job defending the 3 point line or the Blazers will make them pay if they don't.

Go to the Hoop - The Blazers lead the league in defending the 3 point line, allowing just 5.3 three pointers per game on 29.8% shooting. The Celtics need to get into the paint and not settle for 3 pointers in this game as chances are that they will be well defended.

X-Factors
Jet Lag and Fatigue
The Celtics have had a couple days off while the Blazers played the night before and had to travel on top of it. Fatigue could become a factor for the Blazers, but being on West Coast time could affect the Celtics.

The Celtics are are 0-2 this season and 4-6 over their last 10 games with Phillips as a ref. The officiating was fairly even in 4 of the 5 games last season. In the game in OKC the Celtics shot 20 free throws to 33 for the Thunder and there were more than a few questionable calls. It was Phillips that got Tommy to swear on the air last season in a game against Houston about the refs falling for all the blank blank flops. This season Phillips was the lead official for the game vs the Bulls where the Celtics shot 11 free throws to 40 for the Bulls. The officiating was terrible and one sided. Tommy described it this way, "This was an abomination. It wasn't even close to a decently officiated game." The Blazers are 2-2 this season and are 4-6 in their last 10 games with Phillips. His home W/L record this season is 19-11.

Kevin Cutler
Kevin Cutler is entering his fifth NBA season after having officiated 217 games in his first four seasons. Cutler owns six years of collegiate officiating experience, including the 2009 NIT and the 2010 NCAA Tournament. Additionally, Cutler worked two NBA D-League Finals as well as the 2008 NBA D-League All-Star Game. Cutler called the 1/9 game against the Pacers this season and there were a series of terrible calls down the stretch of that game, including an out of bounds call that was obviously wrong and which gave the game to the Pacers. The Celtics are 0-2 this season and 4-5 over Cutler's career. The Blazers are 1-1 this season and 9-1 over their last 10 games with Cutler. His home W/L record this season is 18-12.

The Celtics are 0-2 this season and 4-6 in their last 10 games with Lindsay making the calls. One win last season was a 101-95 win over Chicago where the Bulls shot 31 free throws to 16 for the Celtics and there were more than a few questionable calls. But then, he called a game vs the Mavs where the Celtics shot 30 free throws to 17 for the Mavs and the Celtics got the benefit of a lot of calls. In several of the games the officiating was good but in a loss last season to the Cavs the officiating was terrible, with bad calls going both ways. Tommy had this to say, "I don't remember when there was such a plethora of terrible calls throughout." Lindsay also called the game vs the Bulls with Jason Phillips where the Celtics took 11 free throws to 40 for the Bulls and where Tommy described it as an abomination and not even close to a decently officiated game. The Blazers are 1-0 this season and 7-3 in in their last 10 with Lindsay. He's not intimidated by the home crowd with a home W/L record this season of 15-19.