The Celtics road trip gets tougher as they visit the first place Golden State Warriors, who are an impressive 20-1 at home.

The Celtics road trip gets tougher as they visit the first place Golden State Warriors, who are an impressive 20-1 at home and have an 18 game win streak going at home. The Celtics, on the other hand, are just 6-13 on the road. Last season the Warriors won the season series for the first time since 2006-07.

The Celtics have 199 total wins over the Warriors and are hoping to notch #200 in this game.
The Warriors have won 14 of the last 18 games vs the Celtics at Oracle Arena. They are 23-1 with this current starting lineup. They have won their last 4 games while the Celtics have a more modest 2 game winning streak.

The Celtics have won their last two games since Brandon Bass was inserted into the starting lineup and so I imagine that Brad Stevens will keep the starters the same for this one. Kelly Olynyk went back to Boston for tests on his sprained ankle. They will also be missing Marcus Smart who is out due to a death in the family. For the Warriors, they are healthy other than Festus Ezeli, who is expected to be out.

The Celtics are playing in the 3rd game in 4 nights and in addition, this is the first of back to back games as they travel after this one to face the Utah Jazz on Monday night. Their first back to back of the trip resulted in two wins. They have just 12 players available for this one and face a Golden State team that is at full strength and on a roll. It's going to be a tough game and they will need some inspired play along with a good deal of luck in order to avoid getting blown out in this one. 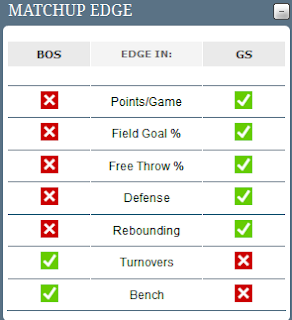 Evan Turner vs Stephen Curry
The Warriors have perhaps the best back court in the league. Stephen Curry is playing very well and will be a tough cover for the Celtics. Curry is averaging 23.2 points, 4.8 rebounds, 8.1 assists and 2.10 steals. He is shooting 50.1% from the field and 40.2% from beyond the arc. Slowing him down will be key.

Avery Bradley vs Klay Thompson
The other half of the Warriors talented back court is coming off of a record setting performance in the Warriors last game vs the Kings. He finished the game with 52 points, 5 assists, and 4 steals and scored 37 points in the 3rd quarter alone. He was 13-13 from the field, including 9-9 from beyond the arc. He is averaging 21.9 points, 3.6 rebounds, 3.1 assists and 1.26 steals. He is shooting 47.2% from the field and 44.3% from beyond the arc.

Keys to the Game
Defense - The Warriors can put up points quickly and in bunches. It will be important for the Celtics to bring their defensive intensity into this game, especially to shut down the Warriors' fast breaks. The Celtics must especially guard the perimeter as the Warriors are very dangerous beyond the arc. The Warriors are tops in the league in scoring, averaging 111.1 points per game. They are also 12th best on defense allowing just 99.0 points per game. The Celtics must play swarming team defense if they hope to get a win here.

Take Care of the Ball - The Warriors can be very disruptive by getting into the passing lanes. The Celtics seem to go through periods in every game where they turn over the ball several times in a row. The Celtics need to stay focused and not give the Warriors any easy opportunities to steal the ball or to get out on the break. The Warriors are 4th in the league in getting steals and if the Celtics get sloppy with the ball, the Warriors will make them pay.

Be Aggressive - The Celtics need to come out focused and play hard from start to finish. The Celtics have to be the more aggressive team throughout the game. They must be aggressive on defense, on the boards, in chasing down loose balls, and in taking the ball to the hoop and not settling for jumpers. Their effort was good vs the Blazers and Nuggets and they need to up their intensity even more to get a win in this game.

X-Factors
Focus and Fatigue and Luck
The Celtics need to come out focused and keep their focus throughout the game. They can only hope that the Warriors will let their focus waiver a bit and underestimate them. Also, the Celtics are playing in their 3rd game in 4 nights on the road. Fatigue may be a factor down the stretch. And with the Warriors better in just about every category, the Celtics will need a little luck to go their way as well.

He was lead official in the Nets game that resulted in a brawl the season before last. Capers gave Doc a T for yelling to Rondo. They let the Nets get away with pushing and shoving and hard fouls the entire first half. The Nets shot 17 free throws to 5 for the Celtics in the first half and 3 of those free throws were on technicals. They did better in the second half after the brawl, but the refs' failure to call the game evenly in the first half led to the fight. The Celtics are 0-3 this season and 3-7 in their last 10 games with Capers. The Warriors are 0-1 this season and 6-4 in their last 10 with Capers. His home W/L record this season is 18-15.

Matt Boland
Entering his 13th season as an NBA official, Matt Boland has worked 653 regular season games. Prior to joining the NBA, he spent seven years officiating in the CBA, including the 1999, 2000 and 2001 CBA Finals. He also
officiated for five years in the WNBA and worked the 2002 and 2003 WNBA Finals, as well as two years in the NBA D-League, working the 2003 Finals. Boland also has five years of USBL officiating experience, including the 1997 USBL Finals. Boland officiated at the collegiate level for four years, working in the MAAC, Ivy, Northeast, TAAC and OVC Conferences. He also has high school officiating experience in his home state of Connecticut and worked two State Finals games in 1997 and 1998.

Boland, along with Scott Foster, was questioned by the FBI in regard to the Tim Donaghy case after it was found that Donaghy often phoned Boland on game days. The FBI cleared both Boland and Foster of involvement in that betting scandal, but that doesn't mean much. In this season's game vs the Bulls, the officiating was totally one sided with the Celtics taking 11 free throws to 40 for the Bulls. Tommy said this about it: "This was an abomination. It wasn't even close to a decently officiated game." The Celtics are 2-2 this season and 6-4 over their last 10 games with Boland while The Warriors are 1-2 this season and 5-5 in their last 10. Boland's home W/L record this season is 19-14.

Wall was the ref that called the clothesline on Barbosa by Bogans in the Nets game 2 seasons ago just a regular foul. Wall also officiated the Cavs game this season where they called it evenly through 3 quarters and then they gave the game to the Cavs in the 4th quarter. The Celtics are 1-2 this season and 2-8 in their last 10 games with Wall while the Warriors are 3-2 this season 5-5 in their last 10. His home W/L record is 15-16.