The Celtics grueling road trip continues as they pay a visit to the Utah Jazz.

Share All sharing options for: Celtics look to get back to winning as they take on the Jazz

The Celtics grueling road trip continues as the Celtics pay a visit to the Utah Jazz. This is the first of two meetings between these two teams this season. They will meet in Boston on March 4.

Last season these two teams split the series with each team winning on their home court. Jeff Green and Kelly Olynyk led the Celtics with 21 each in the Celtics win. Neither of those players will be available for this one. Jared Sullinger averaged 14 points and 8 rebounds in the two contests. Haward averaged 10 points, 6.5 rebounds and 7.5 assists in the two games Kanter averaged 17 points and 6.5 rebounds for the Jazz.

Jazz leading scorer Gordon Hayward played for Celtics head coach Brad Stevens at Butler and the two remain close. Jae Crowder also has a connection to the Jazz. His dad Corey Crowder played for the Jazz during the 1991-92 season.

The Celtics are 6-13 on the road while the Jazz are 8-12 at home. The Jazz have won their last two games and are coming off a blow out win over the Brooklyn Nets 108-73. They haven't won 3 games in a row since February of last year and will be extra motivated to get that 3rd win tonight.
The Celtics had won two games in a row before their loss to the Warriors. It was a tough loss, but they had to feel good about hanging with the Warriors who have been blowing every other team out lately. The Warriors have been averaging a 13 point margin of victory and for the Celtics to lose by just 3 is impressive. Especially since those 3 points came from a bogus call by the refs just before half-time.

Marcus Smart is expected to be back with the team for this one after missing the last game due to a death in the family. Kelly Olynyk will once again be out. Andre Dawkins remains with the Red Claws but could possibly join the team in Minnesota for Wednesday's game. Avery Bradley jammed his thumb in last night's game vs the Warriors and left the arena with it heavily bandaged. But, he is expected to play in this one. 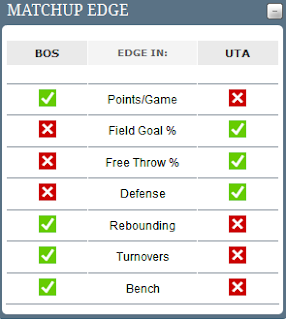 Jae Crowder vs Gordon Hayward
Hayward is leading the Jazz with 19.0 points, 4.7 rebounds and 4.2 assists. If Jae can slow him down, it will give the Celtics a good chance to grab a win in this one.

Brandon Bass vs Derrick Favors
Favors is averaging 15.8 points, 8.6 rebounds and 1.4 assists. Bass will need to make him work on both ends of the court.

Keys to the Game
Rebound - Much of rebounding is effort and when the Celtics put out that effort on the boards, we see it in the other areas of the game.

Take Care of the Ball - The Celtics still turn the ball over too much. They have to take better care of the ball, make smart passes, and limit their turnovers.

Play 48 Minutes - The Celtics can't afford to dig a hole at the beginning of the game and they can't let up at the end and lose focus and miss shots and allow the Jazz to score. They also can't afford those periods in the game where they turn the ball over and lose their focus. They have to play hard from the opening tip to the final buzzer.

Defense - Defense is the key to winning each and every game. The Celtics must play swarming team defense, especially in transition. Defense wins games and it has to come from every player.

X-Factors
Fatigue and Focus
The Celtics are playing in their 4th game in 5 nights and in the second of back to back games on a tough road trip. Fatigue could get them down the stretch. As a young team, they also have to focus on the road and in front of a hostile crowd.

There are two very badly called games that Washington called come to mind. In a loss to the Pistons three seasons ago, Detroit shot 46 free throws to 15 for the Celtics, Rondo was ejected, and Tommy Heinsohn called it the worst officiated game all season (are you cringing yet?). In Game 2 vs the Heat in the 2012 playoffs, the Heat shot 47 free throws to 29 for the Celtics, in spite of the Celtics attacking the basket all night. There were bad calls throughout the 4th quarter and OT, all in the Heat's favor. Pierce, Pietrus, and Dooling all fouled out. LeBron was given 24 free throws all by himself. For the most part, other than those two games he hasn't been too bad. The Celtics are 1-1 this season and 3-7 in their last 10 games with Washington. The Jazz are 2-1 this season and 3-7 over their last 10. His home W/L record is 18-20.

Josh Tiven
Joshua Tiven is entering his fifth NBA season having officiated 227 NBA games and one playoff game.
Tiven has seven years of NCAA officiating experience, as well as two years of WNBA officiating experience and two seasons of WNBA Playoff experience. He also has worked three NBA D-League Finals, as well as the 2007-08 NBA D-League All-Star Game. Tiven lives in Connecticut and he has a twin brother who is a big Celtics fan and who has been shown in the crowd at the Garden when Tiven was officiating. Tiven also has little controversy in his time in the league and has been fairly good in the games he has called for the Celtics. The Celtics are 3-0 this season and 6-4 in their last 10 games with Tiven while the Jazz are 1-1 this season and 4-6 in their last 10 games with Tiven on the court. His home W/L record this season is 21-15.

Scott Twardoski
Scott Twardowski enters his 4th year as an NBA Referee having officiated 162 regular season games. Twardowski’s experience includes six seasons and 206 games officiated in the D-League. He also has four seasons of NBA preseason game experience and worked in NBA summer camps for eight years. He also has seven seasons of WNBA experience, working both the All-Star game and Finals. In addition to his professional experience, Twardoski officiated collegiate games for 12 years in the Pac 10, Big 12, Big Sky and West Coast Conferences and has 10 years of high school officiating experience. Twardoski worked as a teacher for five years in the 16th School District, Covington, AZ.