Celtics look to end road trip on a high note as they take on league worst Minnesota Timberwolves.

Share All sharing options for: Celtics look to end road trip on a high note as they take on Timberwolves


The Celtics finally arrive at the 6th and final game of this road trip as they take on the Minnesota Timberwolves. This is the second and final game between these two teams. The Celtics won the first meeting at home 114-98 back in December.

Both teams looked considerably different for that game. The Celtics were reeling from the trade that sent Rajon Rondo to the Mavs and they started Evan Turner, Avery Bradley, Jeff Green, Jared Sullinger and Tyler Zeller. They were short handed because the new players were not yet ready to play and there were a couple of injuries also. The Wolves had also made a trade and were also hit with several injuries and started Zach Lavine, Corey Brewer, Andrew Wiggins, Thaddeus Young and Gorgui Dieng.

The final game of a long road trip is always the hardest with fatigue catching up to the players and they are looking forward to being back home again finally. A win in this game would give the Celtics a 4-2 record on this very tough road trip. Needless to say, this is a winnable game if they keep their focus and play like they have in their past 4 games. But, they have let up their effort against teams they should beat before, so it's not a given by any means.

Evan Turner reinjured his thumb against the Jazz. X-Rays were negative and he is expected to play in this one. Avery Bradley is also dealing with a jammed thumb and is also expected to play. Kelly Olynyk remains out with the ankle injury. It was mentioned that Andre Dawkins may join the team for this game or he may remain in Maine until the Celtics return home.

For the injury plagued Timberwolves, Ricky Rubio, Robbie Hummel, and Shabazz Muhammad are all out with various injuries. Kevin Martin, who has missed the past 34 games after fracturing his wrist vs New York on November 19 is listed as questionable for this game. If the Celtics can win this game, they will complete their first winning road trip since 2009 when they went 4-2 on a 6 game road trip. 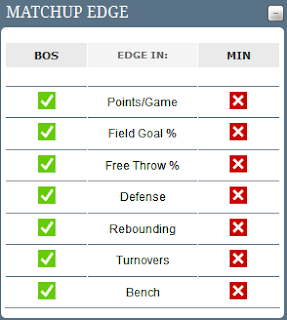 Avery Bradley vs Andrew Wiggins
The Wolves talented rookie is leading the team with 15.2 points, 4.3 rebounds and 1.11 steals. Avery will need to keep Wiggins in check for the Celtics to win.

Jae Crowder vs Thaddeus Young
Young has been playing very well, averaging 14.3 points, 4.8 rebounds, and 1.77 steals per game. Once again, Crowder's defense will be needed to slow down his opponent.

Keys to the Game
Defense - The Celtics must defend. The offense feeds off of the defense and if the Celtics can't get stops they struggle on the other end as well. Their defense has improved over the road trip and hopefully it will continue to be strong in this game. They have to especially up their defense in the paint since the Wolves try to force the ball into their big front line because they shoot 36% from mid range. Defense wins games.

Rebound - The Celtics must get rebounds to prevent second chance points and fast breaks. Rebounding takes effort and desire and the Celtics have got to show both and crash the boards as a team. They can't score if they don't have the ball ans so they have to crash the boards. Rebounding will not be easy against the length of the Wolves front line. The Wolves are 6th in the league in offensive rebounding rate and so the Celtics will have to put out extra effort if they want to win the battle on the boards.

Set the Pace- The Celtics must run from the beginning of the game until the final buzzer. Running will allow them to get easy baskets as they get down the court before the defenses set up. It will be tempting to slow it down because they have had a rough trip and are tired, but they need to continue to push the pace. Perhaps some more rested legs off the bench will help with this.

X-Factors
Fatigue and Focus
The Celtics have had a grueling road trip and so fatigue may be a factor down the stretch. Also, for a young team, it would be easy to lose focus as they look ahead to getting back home. If they keep their energy up and stay focused they have a good chance at ending the trip with 4 wins against just 2 losses.

In the past, Goble has been good in some games and terrible in others. He was the referee who called the clothesline on Barbosa in a Nets game 2 seasons ago a regular foul. He also called a foul at the end of that game on an obvious clean steal that could have changed the outcome of the game. In a Clippers game last season, he ignored fouls by the Clippers and called phantom fouls on the Celtics all game. Tommy made the comment that the Celtics had no shot to win after the officiating took over. The Celtics are 2-1 this season and 5-5 in their last 10 games with Goble and the Wolves are 0-2 this season and 4-6 in their last 10. His home W/L record is 19-16.

Derrick Collins
Derrick Collins has officiated 806 regular season games and 14 Playoff games in 13 NBA seasons. Prior to joining the NBA, he officiated five seasons in the CBA where he worked two Finals, and three seasons in the WNBA, working three WNBA Playoffs and Finals. He has seven years of collegiate officiating experience in various conferences (Big 12, Sun Belt, Conference USA, Southland, SEC, TAAC, OVC and SWAC), and he officiated a Southland Conference semifinal game. Collins also officiated at the high school level in Louisiana. There is very little controversy around Collins. The Celtics are 0-3 this season and 4-6 in their last 10 games with Collins while the Wolves are 1-2 this season and 3-7 in their last 10. His home W/L record this season is 16-19.

Justin Van Duyne
Justin VanDuyne is one of three new officials for the 2014-15 season. VanDuyne joins the staff after four seasons as a referee in the NBA D-League, already having officiated 16 regular season NBA games as a non-staff official. Prior to joining the NBA, Van Duyne officiated in numerous college conferences including the PAC-12, Mountain West, Big West, WCC, and WAC. The Wolves are 1-1 with Van Duyne while the Celtics are 0-4 for his career. His home W/L record this season is 12-17.