The Celtics return home from a tough road trip to face a tough test at home as they host the Houston Rockets.

The Rockets are in a 3-way tie with the Clippers and Blazers for the 3rd playoff spot in the West. They are also just 1.5 games out of the 2nd spot and so every win is important to them at this point. They aren't going to take the Celtics lightly.

The Celtics on the other hand are just 2 games out of the final playoff spot in the East and are fighting to make the playoffs. (Although some fans and possibly their GM would rather they remain in the lottery). After this game their next 4 games are against teams under .500.

Kelly Olynyk remains out for the Celtics and both Evan Turner and Avery Bradley are expected to play though thumb injuries. Dwight Howard will miss his 3rd straight game for the Rockets with knee injury.

Note: It was on this date in 1994 that the Celtics retired #32 in honor of Celtics' Hall of Famer and Houston's Coach Kevin McHale. 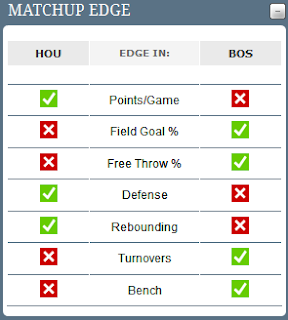 Avery Bradley vs James Harden
Harden is the league's leading scorer and is playing very well. He is averaging 27.3 points, 5.6 rebounds and 6.8 assists. If Avery can slow him down, it will give the Celtics a much better chance of winning this game.

Benches
The Rockets bench has been playing very well for them and is one of the reasons that they have been winning recently. They are getting 42.8 points on 47.4% shooting in their last 4 games. The Celtics must have a good game from their bench as well if they hope to get a win.

Keys to the Game
Defense - The Rockets have the 7th ranked offense in the league, scoring 102.9 points per game. The Celtics defense was weak against the Wolves, allowing a team that averages 97 points to score 110 points in the game. It's important for them to play tough defense as it will be very difficult to outscore the Rockets high powered offense if they don't.

Rebound - The Rockets are 13th in the league in rebounding with 43.3 per game. Much of rebounding is effort and energy and the Celtics must show both and crash the boards to keep the Rockets from getting easy points off rebounds.

Effort and Energy - The Celtics simply don't have the talent to beat teams on talent alone. They must win with energy and effort and grit. They have to be the team that wants it more and that works harder for the win.

X-Factors
Home and Fatigue
The Celtics are finally back home again and should get a boost from playing in front of the home crowd again. However, they are going to have to overcome the fatigue of playing in 6 games in 10 nights and traveling to an fro across the country.

Mike Callahan
A veteran of 24 NBA seasons, Mike Callahan has officiated 1,428 regular season, 143 Playoff and 15 NBA Finals games. He was a member of the crews that officiated the 2007 NBA All-Star Game, 1994 Mexico Challenge and the 1996 Schick Rookie Game. Prior to joining the NBA, Callahan spent three years officiating in the CBA, including the 1989 and 1990 CBA Finals. A member of the Cardinal O’Hara High School basketball team for four years, Callahan also coached the freshman basketball team after graduating.

Pat Fraher
Pat Fraher has officiated 793 regular season NBA games and 16 Playoff games entering his 14th season in the NBA. Prior to joining the NBA, Fraher officiated for seven years in the CBA, where he worked the CBA Finals and All-Star game. In addition, Fraher spent four years with the WNBA, where he officiated playoff games in both the WNBA Eastern and Western Conference Finals. Fraher also has two years of collegiate officiating experience with the NSIC and 10 years of experience as a high school official in his home state of Minnesota.

Kevin Scott
Kevin Scott enters his fourth NBA season having officiated 154 regular season games. Scott’s experience includes four seasons and 138 games officiated in the NBA D-League where he officiated the playoffs in 2009, 2010, and 2011 and was selected to work the NBA D-League Finals in 2011. Scott’s collegiate experience includes four years in the Southeastern Conference, 10 years in the Atlantic Sun Conference, six years in the Southern Conference, and seven years in the Big South Conference. Scott has also been mostly good in the games he has called for the Celtics. The Celtics are 0-2 this season and 3-7 over their last 10 games with Scott while the Rockets are 4-0 this season and 8-2 in their last 10. His home W/L record this season is 20-14.