Celtics look to get back on track vs short handed Hornets

Celtics look to even the series with the short handed Hornets.

Share All sharing options for: Celtics look to get back on track vs short handed Hornets

The Celtics and Hornets meet for the second of four matchups this season. The teams will also face off in Boston on Feb. 27 before closing out the season series in Charlotte on March 30.

The Hornets defeated the Celtics 96 - 87 on Dec. 10 in Charlotte. In that game, former Celtic Al Jefferson led the Hornets with 23 points and 14 rebounds. Overall, Big Al is averaging 19.9 points against Boston, the most he averages against any opponent.

The Hornets had lost 5 games in a row before beating the Magic in their last game. The Celtics are coming off two straight losses and have lost 6 of their last 8 games. The Hornets always seem to give the Celtics a hard time, but they have only won 4 out of the last 18 games in Boston.

The Hornets are short handed with both Al Jefferson and Lance Stephenson expected to be out along with Jannero Pargo. Jason Maxiell (right hip flexor strain)is listed as questionable and Gary Neal (right hamstring strain) is listed as probable. For the Celtics, Marcus Thornton and Jameer Nelson are both listed as out. James Young will be active for tonight's game. 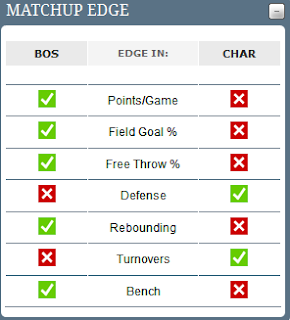 Evan Turner vs Kemba Walker
The last time these two teams met, Kemba Walker was matched with Rajon Rondo. Rondo finished with a triple double (12pts, 10reb, 10 ast) while Walker finished with 18 points, 5 rebounds, 7 assists 3 steals and most importantly, the win. Evan Turner is coming off a big game against the Bulls with 29 points, 5 rebounds, and 6 assists and hopefully can match that play in this one. Walker is averaging 17.3 points, 3.7 rebounds, 5.5 assists and 1.4 steals for the season.

Jeff Green vs Michael Kidd-Gilchrist
Jeff Green leads the Celtics with 18.2 points per game, but he's in a little slump and has averaged just 11.7 points on 33.3 percent shooting in the last three. Kidd-Gilchrist is averaging 9.6 points, 5.9 rebounds, and 1.2 assists for the year. It would be a good time for Green to break out of his slump.

Tyler Zeller vs Cody Zeller
It’s not so rare for sets of brothers to play in the NBA, but in the case of Cody and Tyler Zeller, both are starters early in their careers. They aren't matched up against each other as such because Tyler is playing center and Cody is playing power forward, but it's always fun to watch siblings go at each other.

Rebound - The Celtics can't run and they can't score if they don't have the ball. They must crash the boards as a team and put out the extra effort it takes to get the rebounds.

Defense - Defense is always a key to getting a win. The Celtics have to get stops, especially down the stretch. The Hornets average just 95.1 points per game and the Celtics will need to play tough defense to keep them from having a high scoring game in this one.

Move the Ball but Limit Turnovers - The Celtics must move the ball and find the open man. They struggle to score when the ball stops moving. At the same time, they have to limit turnovers. They give away way too many points by making careless passes and by losing focus.

X-Factors
Home Game, Injuries, and Officiating
The Celtics will be home and so should get a boost from the home crowd. The Hornets have been stung with the injury bug with Al Jefferson, Lance Stephenson and Jannero Pargo all listed as out and Jason Maxiell listed as questionable. Gary Neal is expected to play but may be rusty from being out.

Hopefully this game will be better officiated than their last one. It's hard to win a game when the opponent shoots 29 more free throws in spite of both teams being aggressive and going to the hoop.

The Celtics are 4-6 in their last 10 games with Brothers while the Hornets are 2-8 in their last 10. Two seasons ago, in a game vs the Knicks, twice Brothers made the correct call from across the court after Dick Bavetta, who was standing right on top of it, missed the call. All in all, Brothers is one of the better refs in the league. His home win/loss record this season is 14-13.

Brent Barnaky
Brent Barnaky enters his fifth NBA season having officiated 207 NBA games. Barnaky came to the NBA with 10 years of collegiate officiating experience in the Southeastern Conference, Big East, Conference USA and other college conferences as well. He completed three years of postseason officiating in the NIT (2008-2010). He officiated the 2008, 2009 and 2010 NBA D-League Playoffs, and the 2009 and 2010 NBA D-League Finals.
As with many of the refs, Barnaky can be good or very bad. The Celtics have had a couple of memorable games with Barnaky in the past. In a loss to the Pistons two seasons ago that Tommy Heinsohn called the worst officiated game all season, Rondo was ejected and the Pistons shot 46 free throws to 15 for the Celtics. In a game vs the Bucks last season, he allowed the Bucks to mug the Celtics all game and called ticky tack fouls on the Celtics but when the Celtics tried to commit an intentional foul to stop the clock, they wouldn't call it. The Celtics are 1-0 this season and they are 5-5 in their last 10 games with Barnaky while the Hornets are 1-2 this season and also 5-5 in their last 10. His home W/L record is 10-15.

JT Orr
J.T. Orr enters his fourth NBA season having officiated 162 regular season games. Orr’s experience includes five seasons and 177 games officiated in the NBA D-League. He also has four seasons of NBA preseason experience and has worked in NBA summer camps for nine years. In addition to his professional experience, Orr officiated collegiate games for 13 years, working the NCAA tournament in 2011 and including service for the PAC 10/12, West Coast and Big West Conferences and multiple small college conferences. He also has 15 years of high school officiating experience.
The Celtics are 1-0 this season and 4-6 over their last 10 games with Orr as a ref. As with most refs, he can be good or bad. He has called a few one sided games where the Celtics can't get a call and others where the officiating is even. The Hornets 1-3 this season and 5-5 in their last 10 games with Orr. His home W/L record this season is 13-11.