The Celtics visit the Brooklyn Nets looking for their first road win since Rondo was traded.

Share All sharing options for: Celtics begin 3 game road trip with a visit to KG and the Nets

The Celtics visit the Brooklyn Nets looking for their first road win since Rondo was traded. This is the 3rd of 4 regular season meetings between these two teams with the series tied 1-1. They also met twice in the preseason. They will meet once more at the Barclays Center in March.

This is the first game of a 3 game road trip for the Celtics. They will visit the Pacers on Friday and the Raptors on Saturday before returning for a home game against the Pelicans on Monday. Brad Stevens has said that this is an important trip for the team and it is their longest road trip of the season so far.

The topic after the Celtics loss to the Hornets and at practice was effort. Instead of a light practice on their off day, Brad Stevens had them go hard in Tuesday's practice. Hopefully they got the message and we will see a better effort in this one. They got a boost from James Young in the last game but he may or may not see the court in this one. It would be nice to see him get some regular minutes.


Before the last game, Stevens said that he was happy with his starting 5. But after another slow start, he hinted that he may make some changes. Whether these changes come for this game or not remains to be seen. Both Marcus Thornton (calf) and Jameer Nelson (ankle) are improved but both are listed as game time decisions. For the Nets, Deron Williams is expected to play tonight after missing the last game with soreness in his side. 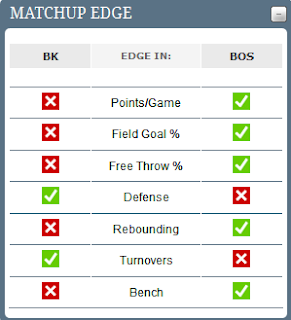 Jeff Green vs Joe Johnson
Johnson leads the Nets in scoring at 16.6 points per game. It will be key for Jeff Green to slow him down if the Celtics expect to get the win. Green has been in a slump and this would be a great time for him to break out of it.

Evan Turner vs Jarrett Jack
Turner has been playing well at the point in spite of the slow starts. Jarrett Jack is averaging 10.7 points, 3.1 rebounds and 3.9 assists but is capable of big games if the defense is lax.

Honorable Mention
Jared Sullinger vs Kevin Garnett
This is the student vs the teacher. Sully is a proud player and that should fire him up to play well along with playing against his former mentor to show that he learned his lessons well. KG also has a lot of pride and will do his best not to let Sully get the better of him. This should be a good matchup.

Keys to the Game
Pace and Space - The Celtics must run and move the ball and get open shots. Running on every possession will allow them to get easy shots before the defenses can get set up. They can also wear the older Nets down if they can keep the pace up.

Rebound - The Celtics can't score if they don't have the ball. They have to rebound from every position on the court in order to give themselves extra possessions and to limit the Nets' fast break opportunities and second chance baskets. They all have to make an effort on the boards to make up for the loss of Rondo, who was one of the Celtics better rebounders. They have been getting out-rebounded in recent games and that has to stop if they want to get back to winning.

Effort for 48 Minutes - The Celtics have started slow and dug a big hole in the last few games and then have to play very hard to catch up and come up just short. In the last game Sully had 22 points, 8 rebounds and 4 blocks. The other 4 starters COMBINED finished with 18 points, 8 rebounds, and 7 assists. Any of the 4 is capable of a line like that by themselves but there was no effort there. If Stevens starts the same group and they come out flat again, he needs to pull them right away for a group that will give more effort.

Be Aggressive - The Celtics have been giving less than their best effort in their recent losses. They must be the more aggressive team in going after loose balls, in rebounding, on defense, in going hard to the hoop, and just play harder in general.

X-Factors
On the Road and Effort
The Celtics are on the road and as with most young teams, they struggle away from home. They need to focus and play hard regardless of the arena. The talk after their last loss was all about effort, or the lack of it. If they play hard from start to finish, they have a good chance to win this one.

Mike Callahan
A veteran of 24 NBA seasons, Mike Callahan has officiated 1,428 regular season, 143 Playoff and 15 NBA Finals games. He was a member of the crews that officiated the 2007 NBA All-Star Game, 1994 Mexico Challenge and the 1996 Schick Rookie Game. Prior to joining the NBA, Callahan spent three years officiating in the CBA, including the 1989 and 1990 CBA Finals. A member of the Cardinal O’Hara High School basketball team for four years, Callahan also coached the freshman basketball team after graduating.

James Williams
James Williams enters his fifth NBA season having officiated 216 regular season games. Williams owns 10 years of experience in the collegiate ranks, having officiated for the NCAA from 2001-2010. He also officiated two seasons in the WNBA, and has worked two NBA D-League Finals as well as the 2010 NBA D-League All-Star Game. There hasn't been a lot of controversy with James Williams as a referee. None of his games stand out as terribly bad as with some refs. The Celtics are 1-0 this season and 4-6 in their last 10 games with Williams while the Nets are 1-1 this season and 7-3 in their last 10. His home W/L record this season is 15-13.