The Celtics are on the road once again to take on the Milwaukee Bucks, who have won their last 4 games.

Share All sharing options for: Celtics look for their first road win as they visit the Milwaukee Bucks

The Celtics are on the road once again to take on the Milwaukee Bucks, who have won their last 4 games. The Celtics are looking for their first 2 game win streak of the young season. The Bucks won the series 2-1 last season. This is the first of 4 meetings between these two teams this season.

The Bucks are the second youngest team in the league at 24 years 144 days, behind only the Philadelphia 76ers. The Celtics aren't far behind, however with an average age of 24 years 348 days, good for 5th youngest in the league.

There are some ties between these two teams. This is a homecoming of sorts for Jae Crowder who played his college games for Marquette at the BMO Harris Bradley Center. Former Celtic, Jerryd Bayless is playing well for the Bucks and may be looking to have a big game against his former team.
Greg Monroe was the subject of rumors this summer linking him to the Celtics, who were reportedly on his short list of destinations. After several weeks of reports that he was meeting with both the Celtics and the Bucks he chose the Bucks and this would be a good time for the Celtics to show him that he made the wrong choice.

Marcus Smart did not travel with the team to Milwaukee and stayed home to continue to rehab his injured toe. Isaiah Thomas should to get the start again in his place, with Evan Turner expected to play more to help fill in for the injured Smart. The Celtics will have to head back to Boston right after the game to prepare to face the Pacers at home on Wednesday. 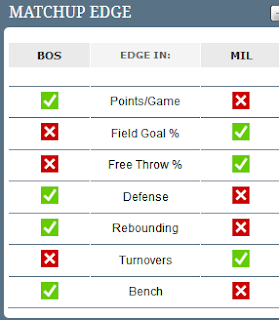 Jae Crowder vs Giannis Antetokounmpo
Antetokounmpo, aka the Greek Freak, is like no other small forward in the league. He is 6'11" tall and very athletic. He is averaging 19.3 points, 7.3 rebounds, and 2.2 assists per game and will be a challenge for Jae to have to deal with on both ends of the court, especially if there is any lingering stiffness in Jae's knee.

Jared Sullinger vs Greg Monroe
Monroe was rumored to be considering the Celtics this summer but he instead chose the Bucks and is playing well for them. He is averaging 18.1 points, 8.7 rebounds, and 3.1 assists.

Keys to the Game
Defense - Both teams started out slowly on defense but have come on stronger over the past few games. After allowing 115.3 point s in their first 3 games, the Celtics have allowed just 90.3 in the last 4. The Bucks allowed 46% field goal shooting and 43.2% on 3 pointers over their first 4 games but are allowing just 41% from the field and just 21% from beyond the arc in their last 3 games. The team that continues to play the toughest defense will be the one that comes out on top.

Run! - The Celtics were very effective against the Wizards because they ran on every possession and were able to get their shots before the Wizards' defenses were set. The Celtics have to utilize their depth by running the other team off the court.

Take Care of the Ball - The Bucks are very long and athletic. The Celtics need to make careful passes and take care not to allow the Bucks to force turnovers. This also includes hitting their shots and making the extra pass to find the open man.

Road Game - The Celtics will be on the road for just the second game this season. Can they keep their focus and get their first win in a hostile environment?

Official Report
Scott Foster
A veteran official of 21 NBA seasons, Scott Foster has worked 1,305 regular season and 124 Playoff games, including 14 Finals games during his career. He was a member of the crew that officiated the 1996 Europe Tour in Berlin, Germany and Seville, Spain. In addition to his NBA experience, Foster has two years of CBA officiating experience, two years of collegiate officiating experience in the Southern and Big South conferences and six years of high school officiating experience in Maryland.
Foster came into the public eye as the best friend of former referee Tim Donaghy. In his book, Donaghy describes Foster as a very honest and good guy who knew nothing of his gambling. However, recently Donaghy described Foster as a company man who will do what is asked of him to keep his seniority among refs. Foster was part of the 2010 Finals game 7 officiating crew that called the final quarter completely different than the first 3 quarters and very one sided for the Lakers with 21 free throws for the Lakers and 6 for the Celtics in the final 12 minutes. Neither team has fared will in their last 10 games with Foster. The Celtics are 3-7 in their last 10 games with Foster while the Bucks are 2-8 in their last 10. His home W/L record this season is 3-2.
Kane Fitzgerald
Fitzgerald has officiated 380 games and two Playoff games in his six seasons as an NBA official. Fitzgerald started refereeing at the age of 18 at the high school level in New Jersey. Prior to the NBA, he had professional experience in the NBA D-League for four years and the WNBA for two years. He also refereed NCAA Division I basketball in the Ohio Valley, Atlantic Sun and Big South Conferences for two years.
You may remember Fitzgerald from 4 seasons ago when he gave KG a very quick pair of technicals (from about 30 feet away) and tossed him in the 2nd quarter of the Celtics 104-101 win over the Knicks (in which Amare scored 30). In another outing that season with the Celtics, the loss to the Bobcats in Charlotte, he tossed Stephen Jackson after 2 quick questionable T's. His quickness in giving technicals dates back to his days in the D-league where he was close to the top in calling technical fouls there as well. Players need to behave themselves when he is calling the game.
You may also recall him for calling the Nets game that resulted in the brawl. Fitzgerald gave Doc a T for yelling instructions to Rondo. They let the Nets get away with pushing and shoving and hard fouls the entire first half. The Nets shot 17 free throws to 5 for the Celtics in the first half and 3 of those free throws were on technicals. They did better in the second half after the brawl, but the refs' failure to call the game evenly in the first half led to frustrations and the fight. This is Fitzgerald's second game this season calling the Celtics game. He officiated the Celtics first road game at Indiana which was called pretty much evenly. The Celtics are 3-7 in their last 10 games with Fitzgerald while the Bucks are 2-8 in their last 10. His home W/L record this season is 2-2.
Aaron Smith
Smith is listed as a non-staff official, whatever that means and is new to the NBA this season, so there isn't much information on him. As with most new refs, there is always the possibility that they can be swayed by the home fans or sometimes they go overboard in the opposite direction to prove that they aren't influenced by the fans. He spent 2 years calling games in the WNBA before this season. The only game he has called for the Celtics is the preseason game vs the Sixers and has not called any games for the Bucks as yet. This is the first regular season game that he is officiating this season.