The Celtics host the Atlanta Hawks for the first of 4 meetings this season.

Share All sharing options for: Celtics look to get back on the winning track as they host the Hawks

The Celtics and Hawks meet for the first of 4 games this season. The Hawks won the season series 2-1 last season, with the Celtics winning their last meeting at home in February. The Hawks started this season hot with 8 wins and losses to only the Pistons and Timberwolves.

The Hawks have played well on the road with a 4-0 record away from Philips Arena. Both teams last played on Wednesday night and have had one day of rest. The Hawks are coming off a win over the Pelicans while the Celtics are trying to forget a poor showing vs the Pacers.

Marcus Smart returned to the Celtics rotation in the last game, coming off the bench. He looked rusty, but hopefully will be in shape to start this game as his defense will be needed against Jeff Teague, the Hawks' leading scorer. Avery Bradley missed the game vs the Pacers and is listed as day to day. His defense would also be helpful against Kyle Korver. If Avery can't play, Evan Turner will probably get the start in his place. The Hawks have no injuries listed, however coach Mike Budenholzer is away from the team for a family emergency and will not coach tonight. 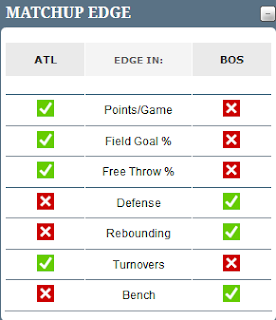 Marcus Smart vs Jeff Teague
Teague is averaging 18.2 points, 2.8 rebounds, 6.9 assists and 1.4 steals per game. Smart returned from the to injury to play against the Pacers but he looked very rusty. Hopefully he has his defensive legs back and can slow Teague down.

Amir Johnson vs Paul Millsap
Millsap is averaging 17.2 points, 9.3 rebounds and 2.3 steals a game. He is a handful for anyone to have to guard. Amir will need to play well on both ends of the court.

Honorable Mention
Jared Sullinger vs Al Horford
Jared has been playing well and his defense has won him the starting center position, at least for now. Horford is averaging 17.6 points, 8.0 rebounds and 1.8 blocks per game. After being very upset about the Celtics performance in the last game, Jared needs to work especially hard to limit Horford's effectiveness.

Keys to the Game
Play as a Team - The Celtics played very un-Celtic like in their loss to the Pacers. The Celtics had only 18 assists and seemed to forget to play together on both offense and defense. They have to get back to moving the ball and finding the open man to get the best shot. They are at their best when they share the ball and work together. Hitting some shots wouldn't hurt either.

Take Care of the Ball - The Hawks are 2nd in the league in steals with 10.8 per game and 1st in points off turnovers with 24.5. The Celtics have to move the ball but also make good passes and not allow the Hawks to get extra points off steals and turnovers. If the Celtics get careless, the Hawks will make them pay.

Rebound - The Celtics were out-rebounded by the Pacers in their last game 41-36 and Jared Sullinger was not happy with the Celtics' rebounding efforts. They have to make an extra effort to crash the glass and not give the Hawks extra possessions.

Defense - Defense wins games. It would make defending easier if the Celtics have their starting back court of Smart and Bradley back from injury. The Hawks have players who can put points up in a hurry and the Celtics have to concentrate on defense to keep them from having big games. The Hawks are averaging 64 points in the second half of their last 5 games. The Celtics have got to play tough defense from tip off to final buzzer with no let up.

Pace - The Celtics play best when they are running and getting out on the fast break. They are 4th in the league in pace with 102.96. Yet, against the Pacers they had a mere 9 fast break points. The Hawks like to run and will be looking to push the pace on their side. The Celtics must do the same

X-Factors
Injuries - The Celtics need their tough defensive back court healthy and playing well in order to keep Atlanta's high scoring back court in check.

Bounce Back - The Celtics weren't happy with the way they played against the Pacers. Hopefully they will bounce back and give their best effort in this one.

Official Report
Derrick Stafford
Over his 27 NBA seasons, Derrick Stafford has worked 1,595 regular season, 135 playoff, and nine Finals games. He was a member of the crews that officiated the 1992 Legends All-Star Game in Orlando, the 1997 McDonald’s Championship in Paris and the 2002 NBA All-Star Game. The 24-year NBA officiating veteran has also served twice on the Executive Board of the National Basketball Referee Association. Stafford has six years of CBA officiating experience, and he officiated Pro-Am basketball for six years. He also has seven years of collegiate officiating and 10 years of high school officiating experience in Georgia where he worked the state finals. While at Morehouse College he played football for two years and baseball for four. Stafford made All Conference three years in baseball and led the confereence in hitting in 1978. He was also co-most valuable player in baseball with NFL referee Jerome Boger in 1976. Stafford is the founder and president of his own foundation, "Don’t Foul Out, Inc.".

The Celtics are 3-7 over the last 10 games with Stafford on the court. For the most part, Stafford has allowed the teams to play and called the games decently. However, two seasons ago, in a loss to the Lakers, the officiating was terrible and the Celtics shot just 5 (yes, that's FIVE) free throws to 20 for the Lakers so he can be good and he can be bad depending on the game. The Hawks are 6-4 over their last 10 games with Stafford. His home W/L record this season is 1-5.

Richardson is known for being inconsistent with his calls, especially on charge/block calls. In the game last season against the Lakers, the officiating was terrible. The calls went the Lakers way throughout the game. They ejected Thomas on a bogus call. Smart and Zeller both fouled out. LA shot 38 free throws to 27 for the Celtics. Even the Lakers fans were complaining because the refs were ruining their tanking effort. The Celtics are 4-6 over their last 10 games with Richardson. The Hawks are 5-5 over their last 10 games with Richardson as a ref. His home W/L record this season is 3-2.

Mark Lindsay
Mark Lindsay has officiated 479 regular season games and one playoff game in his eight NBA seasons. Prior to working in the NBA, he worked for five seasons in the NBA Development League, officiating 116 games, including playoff games in 2005, 2006 and 2007. Lindsay received a Bachelors degree in Elementary Education and graduated with honors from West Chester University where he was a three year letterman on the Men’s Varsity Basketball team. He later worked as a teacher and a real estate sales agent and officiated in several college conferences, including the ACC, Colonial Athletic Association, Atlantic Sun, Big South and Ohio Valley Conferences before joining the NBA.

The Celtics are 3-7 in their last 10 games with Lindsay making the calls. One win last season was a 101-95 win over Chicago where the Bulls shot 31 free throws to 16 for the Celtics and there were more than a few questionable calls. But then, he called a game vs the Mavs where the Celtics shot 30 free throws to 17 for the Mavs and the Celtics got the benefit of some questionable calls. In a game last season vs the Cavs the officiating was terrible, with bad calls going both ways. Tommy had this to say about it: "I don't remember when there was such a plethora of terrible calls throughout." Lindsay also called the game vs the Bulls with Jason Phillips where the Celtics took 11 free throws to 40 for the Bulls and where Tommy described it as an abomination and not even close to a decently officiated game.

Lindsay also called the Lakers game with Richardson, where calls were going against the Celtics throughout the game. Isaiah Thomas was ejected on a bogus call and that technical was later rescinded. Smart and Zeller fouled out and the Lakers shot 38 free throws to 27 for the Celtics. One comment from the Lakers board says it all: "The refs are screwing our tank." He can be good and he can be bad depending on the night. The Hawks are 6-4 in in their last 10 with Lindsay. His home W/L record this season is 4-1.