Celtics host the Mavericks as they push for 4th straight win

Celtics return home from a successful road trip to host the Dallas Mavericks as they look for 4th straight win and the lead in the Atlantic Division.

Share All sharing options for: Celtics host the Mavericks as they push for 4th straight win

The Celtics return home from their very successful 2 game road trip to face the Dallas Mavericks. The Celtics are on a 3 game win streak (Hawks, Thunder, Rockets) while the Mavericks have won their last 4 games (Clippers, Lakers, Rockets, Sixers).

The Mavs swept last season series 2-0 and have won their last 5 overall over Boston and the last two games they have played in Boston. The Mavericks have won 10 of the last 12 games overall and 12 of the last 16 in Boston.

The Mavericks have changed considerably since these two teams last met. Only Dirk Nowitski is the same in their starting lineup. In the last game in Boston, Rajon Rondo led Dallas with 29 points, 6 rebounds, and 5 assists. Tyson Chandler added 17 rebounds and Monta Ellis pitched in 22 points, 5 rebounds, and 4 assists. All three are now long gone.

The only players that remain from the blockbuster trade that sent Rajon Rondo to the Mavs are Jae Crowder on the Celtics and Dwight Powell on the Mavericks. That trade sure didn't work out the way the Mavericks expected it to and the Celtics ended up with the best player in the trade in Jae Crowder, although Powell has been playing well for the Mavericks.

The Celtics are the final stop on a 3 game road trip for the Mavericks. They have already beat the Rockets and the Sixers in their first two stops. They survived 39.5% shooting on Monday to beat the winless Philadelphia 76ers. The Celtics just finished with a stretch of 5 games in 7 nights. Both teams last played on Monday. A win in this game has a special benefit for the Celtics since the Celtics own the Mavs' pick and a win in this game would make that pick just a little better.

The Celtics don't have any injuries listed while JaVale McGee (tibia) is listed as out and Charlie Villanueva (foot) is listed as doubtful for the Mavericks. Isaiah Thomas has started the last two games with Avery Bradley coming off the bench. Brad Stevens hasn't committed to keeping this lineup, but if it isn't broke, no need to fix it. The Celtics are percentage points ahead of the Raptors for the Atlantic Division lead and a win here will put them solidly in first place. 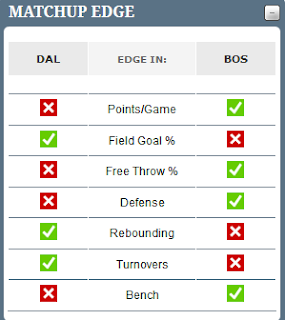 Amir Johnson vs Dirk Nowitzki
Dirk may be getting older, but he is still a dangerous player. He is averaging 18.1 points, 7.0 rebounds, 1.5 assists and 0.5 blocks. Dirk can score both inside and out and so will be a tough matchup. Amir will need to make him work on both ends of the court.

Isaiah Thomas/Marcus Smart vs Deron Williams/Wesley Matthews
Williams isn't known for his tough defense and so he should allow Isaiah to get some easy baskets. I expect Marcus Smart to be on Williams on the defensive end because Williams is big and strong and would be a mismatch for Isaiah. Williams is averaging 12.7 points, 2.1 rebounds, and 5.3 assists. Matthews has struggled somewhat since coming to the Mavs and so might be easier for Isaiah to cover.

Keys to the Game
Defense - The Celtics have been winning by playing tough lock down team defense. They need to continue to play that kind of defense. Defense wins games. The Celtics are holding teams to 95.9 points on 42.7% shooting. The Mavericks have been playing some good defense themselves, holding teams to 99.5 points per game on 43.3% shooting. The Celtics have to play tougher defense than the Mavs if they want to win this.

Be Aggressive - The Celtics need to be the more aggressive team in going to the basket, diving for loose balls, going after 50/50 balls, grabbing rebounds, and just playing harder in general. They have been the team that wanted it more over their last 3 wins and they need to continue to play like that in this game.

Run and Move the Ball - The Celtics are most effective when they run on every possession and move the ball to find the open man. When they stop running and the ball stops moving, they get into a slump and their scoring and defense both suffer. They have to run up the court on offense and run back on defense to set up before the Mavs get back. The Celtics are young and deep and need to use that to their advantage.

X-Factors
Home Game - The Celtics are back home and should get a boost from the home crowd cheering them on. Hopefully the hostile crowd will throw the Mavs off, in spite of the fact that they have won their first two games on this road trip.

Effort - The Celtics can't get complacent after winning 3 in a row. They have to continue to play hard, be aggressive, run and move the ball. If the effort is there, they have a good chance to win this game.

Official Report
Tony Brothers
Tony Brothers is entering his 22nd season as an NBA official and has officiated 1,270 regular season games, 84 Playoff games and five NBA Finals games during his career. He was a member of the crew that officiated the 1996 Mexico Challenge, 1998 Schick Rookie Game, 1999 McDonald’s Championship in Milan, Italy and the 2008 China Games.Prior to joining the NBA, Brothers spent four years officiating in the CBA, including three CBA Finals and a CBA All-Star Game. He has one year of collegiate officiating experience at the Junior College level. Brothers also has seven years of high school officiating experience in Virginia, including three state tournaments.

Two seasons ago, in a game vs the Knicks, twice Brothers made the correct call from across the court after Dick Bavetta, who was standing right on top of it, missed the call. All in all, Brothers is one of the better refs in the league. But, inexplicably in a game last season against the Lakers, he was terrible. He was the referee who ejected Isaiah Thomas on a bogus technical call, which has since been rescinded. He also missed a clear travel and double dribble by Lin right in front of him at a very crucial time. There were bad calls and bogus calls all game. The Lakers shot 38 free throws to 27 for the Celtics. Even the Lakers fans were complaining about the officiating going their way all game. Here is a comment from the Lakers boards that says it all, "The Refs are screwing our tank." Other than that game he has been a decent ref so who knows what we will get in this game. Brothers called the loss at Indiana this season and the officiating in that game wasn't bad. Brothers calls 42.8 fouls per game with 47.1% of those fouls called on the home team.

Tony Brown
Tony Brown has officiated 777 regular season games and eight- Playoff games in his first 13 seasons as an NBA official. Prior to joining the NBA, he officiated for four seasons in the NBA D-League and CBA and three seasons in the WNBA. During that time he worked the 2002 Finals, the 2002 WNBA All-Star Game and the 2001 CBA Finals. As with most refs, Brown has been good and bad in past games with the Celtics. In some the officiating is one sided and in others very good. Brown called Game 1 of the Rockets/Mavs playoff series and it was very one sided against the Mavs. The Rockets shot 45 free throws to 17 for the Mavs. Of course, he called the game with Joey Crawford and that could account for a lot of the controversial calls. Brown calls 36.6 fouls per game with 44.4% called on the home team.

In a game last season against the Magic the officiating was terrible. The Celtics were mugged all night with no calls while they were called for ticky tack contact with the Magic. Orlando shot 28 free throws to 20 for the Celtics, but 6 of the Celtics' free throws were intentional fouls at the end of the game. Otherwise he wasn't bad last season. Taylor calls 39.1 fouls per game with 48.2% called on the home team.