Celtics and Nets begin a home-and-home set in Boston

The Celtics look to improve one of their draft picks as they host the Nets to begin a home and home set.

Share All sharing options for: Celtics and Nets begin a home-and-home set in Boston

The Nets have won 4 of the last 6 regular season games in Boston after losing the previous 10 in a row. The Nets have won just 2 games so far and the Celtics are watching their record very closely because they own the Net's unconditional pick in this year's draft. At this point it looks as though it is going to be a high lottery pick.

Brooklyn's last 7 games have been decided by single digits. The last 5 games have been within 5 points in the final 2 minutes of the game, including the wins over Houston and Atlanta. These two teams have already met twice in the preseason with the Celtics winning both games.

The Celtics are coming off a tough loss to the Mavericks in which they blew an 18 point lead and missed several chances for the win in the final minute. They need to bounce back with a win in this game. The Celtics are just percentage points ahead of the Raptors for first in the Atlantic. The Raptors are playing the Lakers in LA and the Celtics need a win to keep pace or to move a game ahead.

The Celtics have no injuries to report but Jordan Mickey, James Young, and Terry Rozier were assigned to the Red Claws for their game on Thursday night and might still be with Maine, or they may be recalled. I'm assuming that Brad Stevens will stick with the same starting lineup that he has used for the past 3 games, but we can never be sure. 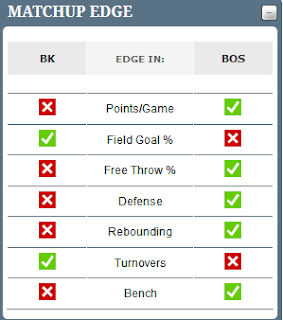 Jack is averaging 14.7 points, 4.7 rebounds, and 7.5 assists. Jack is 4th in the league in assists and 9th in assist to turnover ratio. He also seems to always give the Celtics problems. I expect to see Marcus Smart or Avery Bradley covering him on defense.

Lopez will be a challenge for Sullinger to defend. He is averaging 19.9 points, 8.3 rebounds and 2.4 blocks. Sully needs to be able to keep him away from the basket and away from his preferred spots on offense.

Young is averaging 15.8 points, 8.0 rebounds, 1.5 assists. In his last game he had 27 points and 8 rebounds and can get hot and he is also a good rebounder and so Johnson needs to box him out.

Defense - The Celtics need to continue to play their brand of stifling team defense. Hopefully the referees will be better in this game and allow them to play. Defense wins games and the Celtics' defense will be key to getting this win.

Run and Move the Ball - The Celtics need to run on every possession and they need to keep the ball moving. When they run and move the ball, they are much more effective in finding the open man and getting good shots.

X-Factors
Focus - There was no question that the officiating was terrible in the game against the Mavs. They officials took the Celtics out of their game defensively and the Celtics have to learn to focus regardless of any outside influences. Hopefully the officiating will be better in this game.

It's the Nets - Hopefully the Celtics will respect the Nets and not underestimate them because of their record. Hopefully they also realize the double benefit of beating the Nets to improve their lottery standing.

A veteran of 25 NBA seasons, Mike Callahan has officiated 1,483 regular season, 156 Playoff and 16 NBA Finals games.He was a member of the crews that officiated the 2007 NBA All-Star Game, 1994 Mexico Challenge and the 1996 Schick Rookie Game. Prior to joining the NBA, Callahan spent three years officiating in the CBA, including the 1989 and 1990 CBA Finals. A member of the Cardinal O’Hara High School basketball team for four years, Callahan also coached the freshman basketball team after graduating.

Callahan called game 1 of the Cleveland series in last season's playoffs. The refs were terrible in that game. Even the national TV announcers continually pointed out bad calls and how LeBron got away with so much They also mentioned that if LeBron was called for even half of his infractions the game would have changed. Cleveland shot 33 free throws to 22 for the Celtics. He called the second game this season against the Raptors and it was officiated ok.

As with most refs, Callahan can be good or he can be very, very bad. He usually lets the teams play and isn't a tyrant with the whistle but still makes some head scratching calls from time to time. He averages 43.2 foul calls per game and 47.3% of those calls are on the home team.

Prior to joining the NBA Ford spent five seasons (2009-2015) in the NBA D-League where he officiated 11 playoff games from 2010-2015 including the 2015 NBA D-League Finals and the 2014 NBA D-League All-Star game. Ford also spent four seasons (2011-2015) officiating in the WNBA. He also officiated Division 1 basketball for three season in the Big 10 Conference, Mid-American Conference, & Summit League. In addition, he acted as the Assistant Director of Intramural Sports at Purdue University for six years (2009-2015). Ford holds both a Bachelors & Masters from Ball State University in Sport Administration.

Sometimes young referees can be intimidated by the home crowd and sometimes they try to prove that they can't be intimidated and call everything against the home team. He's a blank slate at this point but I'm sure we will get to know him very quickly. He called the Raptors' game along with Callahan and was pretty good in that game. He averages 43.9 foul calls per game and 45.9% of those are called on the home team.

A former math instructor at Southern University, Bennie Adams joined the NBA officiating staff 21 seasons ago, and since then has officiated 1,171 regular season and nine Playoff games In addition, he has been a USA Basketball official since 1995. Adams has also officiated the 2008 NBA Europe Live Tour and the 2002 NBA All-Star Rookie Challenge. Adams officiated in the CBA for three years, and worked the 1996 CBA Finals. He also has three years of collegiate officiating experience in the Southeastern, Ohio Valley, Trans America Athletic and Southwestern Athletic Conferences. Adams also has 10 years of high school officiating experience in Louisiana. Adams has both a Masters and Bachelors degree in mathematics from Southern University.

Adams tends to be inconsistent especially on charge/block calls. He is on Tommy Heinsohn's naughty list (along with a lot of others). In one game, Tommy went ballistic yelling at the top of his lungs "GO BACK TO YOUR MOMMA BENNIE ADAMS!!!" However, he hasn't been particularly bad in recent games with the Celtics. Adams calls an average of 39.2 fouls per game and tends to let them play for the most part. 45.9% of those fouls are on the home team.