Celtics and Hawks meet for the 2nd of 4 meetings this season with both teams looking to get back in the winning column.

Share All sharing options for: Celtics look to get back on track as they visit the Hawks

Avery Bradley missed the first game vs the Hawks while the Hawks were at full strength. Marcus Smart will miss this game for the Celtics. Hopefully the Celtics can figure out a way to get their defense to work better without him than they did against the Nets, who seemed to get whatever shot they wanted.

The Hawks will be without Tiago Splitter, who injured his hip in Saturday's game. Kent Bazemore is questionable with an ankle sprain that has kept him out of the last 3 games. Jeff Teague had missed 3 games with an ankle injury but returned to come off the bench against Cleveland. I would expect that he will be back in the starting lineup for this game. If not, Dennis Schroder will probably get the start again. 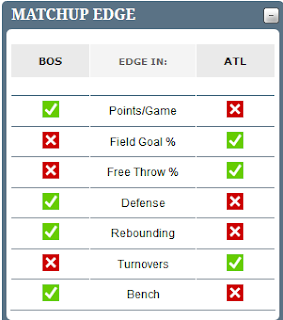 Amir Johnson vs Paul Millsap
Millsap is averaging 17.9 points, 9.3 rebounds, 3.7 assists, 1.1 blocks and 2.1 steals per game. He is a handful for anyone to have to guard. Amir will need to play well on both ends of the court.

Jared has been playing well and his defense has won him the starting center position. Horford is averaging 16.7 points, 7.1 rebounds, 3.1 assists and 1.7 blocks per game. In the past, after a disappointing game, Jared has bounced back with a big game. Hopefully he continues that trend in this game.

Honorable Mention
Teague is averaging 16.8 points, 2.8 rebounds, 6.3 assists and 1.3 steals per game. Teague returned to the bench in the Hawks' last game but should be back in the starting lineup for this one. Teague is capable of having a big game on both ends and hopefully Isaiah is able to handle him.

Keys to the Game
Play as a Team - The Celtics played very un-Celtic like in their loss to the Nets. The Celtics had only 19 assists and seemed to forget to play together on both offense and defense. They have to get back to moving the ball and finding the open man to get the best shot. They are at their best when they share the ball and work together. Hitting some shots wouldn't hurt either.

Take Care of the Ball - The Hawks are 3rd in the league in steals with 9.7 per game and they get a lot of their points on second chance opportunities. They are also 4th in the league, forcing 17.3 turnovers per game. The Celtics have to move the ball but also make good passes and not allow the Hawks to get extra points off steals and turnovers. If the Celtics get careless, the Hawks will make them pay.

Rebound - The Celtics were out-rebounded by the Nets in their last game 49-35 and they can't be happy with that kind of effort. In their earlier win over the Hawks, the Celtics corralled 17 offiensive rebounds. They have to make an extra effort to crash the glass and not give the Hawks extra possessions while giving themselves a chance at second chance points.

Defense - Defense wins games. The Hawks have players who can put points up in a hurry and the Celtics have to concentrate on defense to keep them from having big games. Without Marcus Smart, the rest of the team have got to up their effort on defense in order to keep the Hawks from flying high.

X-Factors
Revenge and Bounce Back Factors - The Hawks will want to get back at the Celtics for their loss in the first game. The Celtics have to be ready for them. If they play like they did against the Nets in the second game, the result will be the same as well. Both teams will want to bounce back from losses in their last games. Which team will be able to do so?

Officiating - Officiating is aways an x-factor. The Celtics play best when the officials let them play and don't call a lot of ticky tack fouls for incidental contact. Referees with an agenda are always a possibility as well.

There are two very badly called games that Washington called that come to mind. In a loss to the Pistons three seasons ago, Detroit shot 46 free throws to 15 for the Celtics, Rondo was ejected, and Tommy Heinsohn called it the worst officiated game all season (are you cringing yet?). In Game 2 vs the Heat in the 2012 playoffs, the Heat shot 47 free throws to 29 for the Celtics, in spite of the Celtics attacking the basket all night. There were bad calls throughout the 4th quarter and OT, all in the Heat's favor. Pierce, Pietrus, and Dooling all fouled out. LeBron was given 24 free throws all by himself. Last season in a game vs the Magic, he was terrible. There was a flagrant 2 call on Smart, which was later downgraded. There was also a terrible flagrant 1 call on Isaiah Thomas that was also later downgraded. The officiating was one sided in Orlando's favor all game. Orlando shot 30 free throws to 16 for the Celtics.

Celtics fans will remember Kennedy's run in with Doc Rivers that resulted in both of them being fined. Yes, David Stern fined one of his precious refs. Here is how Doc described the incident:

Doc was fined for criticizing a referee, but since the league fined Kennedy, they as much as admitted that Doc's criticism was deserved. According to Tim Donaghy, Bill Kennedy is gay and his beef with Doc stems from Doc questioning his sexual orientation. With Doc out in LA, that should be in the past. He may even feel a certain kinship with the Celtics with both of them being dissed by Doc.

The last couple of seasons, he has been decent in the games he's called for the Celtics. He calls an average of 41.4 fouls per game with 54.1% on the road team. The Celtics are 7-3 in their last 10 games with Kennedy while the Hawks are 5-5 in their last 10. Kennedy's home W/L record this season is 6-4.

Marat Kogut
Marat Kogut enters his seventh year as an NBA Referee having officiated 318 games. Kogut immigrated to the United States with his family seven days after he was born. Raised in Brooklyn, N.Y., he started officiating at the age of 16 at local recreational youth leagues. His professional experience includes three years in the WNBA, as well as 4 years in the NBA D-League, where he officiated over 180 games, including the Finals in his last two seasons and the 2009 D-League All-Star Game in Phoenix. Prior to joining the NBA officiating staff, Kogut worked in several Men’s NCAA mid-major Division I conferences, including the Ohio Valley, Atlantic Sun, and Big South Conferences, as well as in New York metro area high school basketball for four years.

Kogut has called games that favored the Celtics and some where the Celtics couldn't get a call and some others where they were called evenly. I guess it depends on his mood and possibly the lead official. He calls an average of 39.4 fouls per game with 49.2% of those fouls called on the visiting team.

The Celtics are 4-6 in their last 10 games with Kogut. He called a loss to the Cavs last season where the game was called evenly through 3 quarters and then completely one sided for the Cavs in the 4th quarter. He ignored a push off and elbow below the belt by LeBron on Jeff Green and instead called the foul on Green. Cleveland shot 37 free throws to 23 for the Celtics. The Hawks are 5-5 in their last 10 games with Kogut. His home W/L record is 4-3.