The Celtics face the Magic for the first time this season as they begin a 5 game road trip.

Share All sharing options for: Celtics begin 5 game road trip with a game against the Magic

The Celtics begin a 5 game road trip with a stop in Orlando to face the Magic for the first time this season. They split the series 2-2 last season with each team winning on their home court. They have split the last 10 games in Orlando but the Celtics have won 9 straight in Boston, dating back to 2010.

The Celtics are 3-3 on the road while the Magic are 6-3 at home. The Magic will always have a place in Celtics history. They beat the Celtics 95-92 in the last game played in Boston Garden on May 5, 1995.

The Celtics are playing on the front end of back to back games and will complete the back to back set in Miami on Tuesday. After 2 and a half games where they struggled on both ends of the court, they seemed to find their way at the end of the Sixers game and then played very well against the Wizards. Hopefully that continues in this game.

The Celtics will once again be without Marcus Smart. Evan Turner left the Washington game after being poked in the eye and didn't return to the game. He's expected to play in this game. For the Magic, their leading scorer, Evan Fournier, is dealing with a hip injury and is questionable. He will be a game time decision. If he can't play, Victor Oladipo will probably move into the starting lineup in his place. CJ Watson is out with a calf injury. 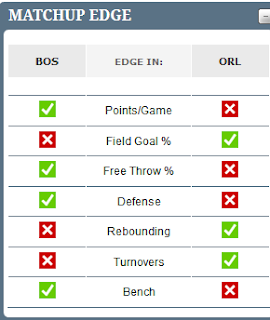 Jared Sullinger vs Nikola Vucevic
Vucevic is averaging 14.9 points and 8.3 rebounds and 1.38 blocks per game. He is an interior defender as well as a force on offense in the paint. Sully will have his hands full trying to contain him. Sully will need to draw him out of the paint on offense to give his teammates a chance to get up shots around the basket.

Avery Bradley vs Evan Fournier
Fournier is leading the Magic with 17.7 points per game. Avery's defense will be needed in this game to slow him down and keep him from having a big game. Fournier will be a game time decision for the Magic. If he can't go, I expect Oladipo to get the start in his place.

Honorable Mention
Evan Turner vs Victor Oladipo
Oladipo is now coming off the bench for the Magic and is averaging 13.9 points, 6.0 rebounds, and 3.9 assists. He is capable of having a big game and so the Celtics second unit will need to deal with him and try to contain him.

Keys to the Game
Defense - Defense wins games pure and simple. The Celtics' tough team defense was back against the Wizards and the Celtics need that to carry over into this game. The Magie are averaging 101.4 points per game, and posted a 136 point game vs OKC on October 30. They also average 89 field goals per game, tops in the NBA. The Celtics must play tough team defense if they want to win this game.

Move the Ball Carefully - The Celtics have to move the ball and find the open man. But in moving the ball, they have to make careful passes and not get sloppy. The Magic average 18.9 points off of turnovers and so they will make the Celtics pay if they don't take care of the ball.

X-Factors
Focus - The Celtics are on the road and they need to keep their focus in spite of all the factors that go into making games on the road more difficult. They have to not allow the crowd or the officials to take them out of their game.

Officiating - The officiating is always an x-factor depending on the various referees and how they call the games, especially against the road team.

Official Report
Sean Wright
Sean Wright has officiated 594 regular season and 19 playoff games in his 10 seasons. Prior to joining the NBA, Wright was an official in the NBA D-League, where he participated in the Playoffs in 2004 and the Finals game in 2005. Wright’s collegiate officiating experience includes working in the SEC, Colonial, Big South, Southern, Ohio Valley, Atlantic Sun and Southwestern Athletic Conferences.

It was Sean Wright that Rondo threw the ball at resulting in his ejection and suspension in 2012. In one game with Wright last season, Tommy called him an idiot after one particularly bad call. The Celtics are 3-7 in their last 10 games with Wright while the Magic are 5-5 in their last 10. His home W/L record this season is 5-7.

Ervin’s resume includes 8 years of collegiate officiating experience, with 6 of those years in Division I having officiated in the Big 12, Conference USA, Big South, Sun Belt, Southland and Southwestern Athletic Conferences. During his stint in Division I, Ervin was selected to work in the 2013, 2014 and 2015 Southland Conference Tournament, as well as the 2015 Sun Belt Conference Tournament in which he officiated in the conference tournament semi-finals. He also has one year and five years of high school officiating experience in New Orleans, Louisiana and Houston, Texas respectively.

Prior to becoming a professional basketball official, Ervin was a middle school physical education teacher, football, basketball and track coach. Ervin graduated with a dual Bachelor of Science degree in Sport Management and Exercise Physiology from the University of New Orleans, where he was a member of Kappa Alpha Psi Fraternity, Inc. and a walk-on member of the 1997 – 98 Privateer basketball team.

Wall was the ref that called the clothesline on Barbosa by Bogans in the Nets game 3 seasons ago just a regular foul. Wall also officiated the Cavs game last season where they called it evenly through 3 quarters and then they gave the game to the Cavs in the 4th quarter. Wall also officiated a Warriors game last season where all the calls down the stretch went the Warriors way and even Warriors fans were surprised at all the calls going their way. The Celtics are 3-7 in their last 10 games with Wall while the Magic are 5-5 in their last 10. His home W/L record is 8-3.