Celtics look to bounce back as they visit the Heat

The Celtics continue to the second game of their 5 game road trip with a stop in Miami.

Share All sharing options for: Celtics look to bounce back as they visit the Heat

It's safe to say that the Celtics are missing Marcus Smart, especially on the defensive end. Smart will once again be out for the Celtics. They've proved that they can play tough defense without him, but for some reason they tend to slack off from time to time. The Celtics are playing in back to back games. They have won their last 2 back to back games and hopefully they continue with point of pride in winning these games.

For the Heat, Luol Deng has been ruled out with a hamstring injury and Amare Stoudemire has been ruled out with an illness. Gerald Green will probably get the start for Deng. Green started the last game and scored 25, along with playing good defense on Carmelo Anthony. The illness has also hit Chris Bosh who missed the shoot around and is listed as a game time decision. 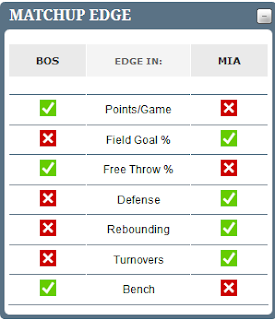 Amir Johnson vs Chris Bosh
Chris Bosh has been playing very well this season after returning from missing part of last season with blood clots in his lungs. He is leading the Heat with 17.5 points, 9.0 rebounds, and 1.9 assists per game. He missed the Heat's shoot around on Monday with an illness and is a game time decision. If he can't play, I'm not sure who would start in his place.

Jared Sullinger vs Hassan Whiteside
Whiteside has played very well since coming to the Heat, especially on defense. He is averaging 14.0 points, 11.4 rebounds and 4.8 blocks per game. The Celtics will have a tough time scoring inside with Whiteside patrolling the paint.

Honorable Mention
Avery Bradley vs Dwyane Wade
Wade isn't the player he once was, but he is still dangerous when he gets going. He is averaging 17.1 points, 3.3 rebounds, and 4.4 assists. Bradley has always played him well and hopefully he can contain him in this game.

Gerald Green was the Celtics first round pick in the 2005 draft. He's been around the league and seems to have matured a bit from the high school player who came into the league. He is averaging 10.4 points but has had some big games for the Heat. He will be looking to impress his former team and so look for him to shoot often. He is coming off a 25 point game in his last start vs the Knicks and he played very good defense on Carmelo Anthony.

Rumors at draft time had Danny Ainge offering all 4 of the Celtics draft picks and then some to move up for the opportunity to take Winslow. He is averaging 7.3 points, 5.3 rebounds and 1.4 assists.

Play Hard for 48 Minutes
The starters need to come out and play aggressively from the beginning and the second unit needs to come in and pick up where they leave off. They have to attack the basket and be aggressive on defense for the whole 48 minutes. No letting up.

Run and Take it to the Hoop
The Celtics need to run on every possession. They have the legs to keep it up and not let up and to tire the older Heat out. The Celtics also have to go to the basket and not settle for jumpers. Almost every game they have offensive droughts when their shots just won't go. When that happens, they have to go inside and not continue to hoist up jumpers. Against the Magic they shot just 18.5% from beyond the arc and were outscored in the paint 52-38. They can't do that and expect to win.

X-Factors
Bounce Back - The Celtics have had poor games like against the Magic and then bounced back to have a much better game and a win the next game. Will they see what they did wrong against the Magic and come back to correct it for this game? The Celtics are also playing back to back and in the past, the Celtics have made it a point of pride to win on the second night of back to backs. Will that give them extra motivation?

Official Report
James Capers
The son of former NBA official James Capers Sr., James Capers has officiated 1,172 regular season games, 78 Playoff games and five NBA Finals games during his 20-season NBA career. In addition to his NBA experience, Capers has six years of CBA officiating experience, including three CBA Finals and two CBA All-Star Games. I've seen several posts from Lakers fans who swear he hates the Lakers. At least he has that in his favor. In 2012, Capers called game 2 of the ECF and the officiating was terrible in that game. The Heat shot 47 free throws to 29 for the Celtics. Pierce, Dooling and Pietrus all fouled out. There were bad calls and missed calls throughout the game. Lebron James took 24 free throws himself, only 4 less than the entire Celtics team.

He was lead official in the Nets game that resulted in a brawl two seasons before last. Capers gave Doc a T for yelling to Rondo. They let the Nets get away with pushing and shoving and hard fouls the entire first half. The Nets shot 17 free throws to 5 for the Celtics in the first half and 3 of those free throws were on technicals. They did better in the second half after the brawl, but the refs' failure to call the game evenly in the first half led to the fight. Last season, he called the Golden State game and made a terrible call to end the first half on a last second heave. Even the Warriors fans thought it was a terrible call. The calls all went the Warriors way down the stretch and Warriors fans couldn't believe how they were getting the benefit of all the questionable calls. He called the game at Brooklyn this season and he made several terrible calls. One of the worst was an offensive foul call on Jae Crowder that should have been a 4 point play. This was with 1:29 to go when the Celtics were making a come back. The Celtics are 0-1 this season and 2-8 in their last 10 games with Capers. The Heat are 7-3 in their last 10 with Capers. He is a homer ref with a home W/L record this season of 9-3.

Steve Anderson
Steve Anderson enters his third NBA season having officiated 99 regular season games. He joined the full-time staff in 2013-14 after six seasons as a referee in the NBA D-League and already having officiated 18 regular season NBA games as a non-staff official. Anderson officiated the FIBA U19 World Championships in the Czech Republic in 2013. This season in a game vs the Nets, the officiating was one sided toward the Nets and Brooklyn took 30 free throws to 14 for the Celtics and that was after they tried to even it up down the stretch. He also called a game vs the Pacers last season in which there were quite a few head scratching calls that prompted a "That's terrible!" from Tommy several times. The Celtics are 6-4 in their last 10 games with Anderson while the Heat are and 2-8 in their last 10 His home W/L record is 8-2.

James Williams
James Williams enters his sixth NBA season having officiated 278 regular season games and 3 playoff games. Williams owns 10 years of experience in the collegiate ranks, having officiated for the NCAA from 2001-2010. He also officiated two seasons in the WNBA, and has worked two NBA D-League Finals as well as the 2010 NBA D-League All-Star Game. There hasn't been a lot of controversy with James Williams as a referee. None of his games stand out as terribly bad as with some refs. The Celtics are 6-4 in their last 10 games with Williams while the Heat are 2-0 this season and 6-4 in their last 10. His home W/L record this season is 6-6.