The Celtics are looking for their 5th straight home win as they host the undefeated Golden State Warriors.

The undefeated Warriors come into Boston to play the 6th game of a 7 game road trip. They are playing in the first of back to back games and will complete their road trip in Milwaukee on Saturday. They are off to the best road start in NBA history with 13 straight wins on the road.

The Celtics are 7-4 at home and have won 4 of their last 5 games, including going 3-2 on a tough western road trip. They are looking for their 3rd straight win. The Celtics are currently 7th in the East, but just 1/2 game out of 3rd and 1/2 game behind the Raptors for the Atlantic Division lead.

The Warriors may be short handed for this one. Harrison Barnes (ankle) and Kevon Looney (hip) are both out. Klay Thompson rolled his ankle late in Tuesday's win over the Pacers. The injury isn't thought to be serious and he's had 2 days to rest it. He is listed as a game time decision. Former Celtic, Leandro Barbosa is also listed as questionable with an illness.

The Celtics could really use Marcus Smart's defense for this game, but he is expected to be out once again with the leg injury. Former Warrior David Lee returned to the court for Wednesday's game and is ready to play against his former team. RJ Hunter is still listed as day to day with the hip injury. 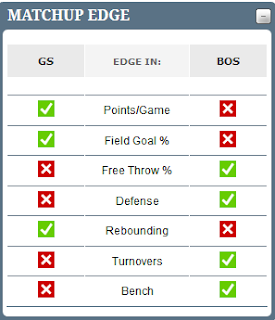 Isaiah Thomas vs Stephen Curry
The simple truth is that no human can guard Stephen Curry. Avery and Isaiah and Jay have to do the best they can but he will still get his. Curry is averaging 32.2 points, 5.0 rebounds, 6.0 assists, and 2.26 steals per game. He is shooting 52.9% from the field and 46.3% from beyond the arc. That is almost super human. The best the Celtics can hope for is to maybe slow him down a little.

Avery Bradley vs Klay Thompson
Thompson is averaging 18.2 points, 3.6 rebounds, and 2.5 assists. He is shooting 46.5% from the field and 44.2% from beyond the arc. He is coming off a 39 point effort on Tuesday before he rolled his ankle. He is listed as questionable for this game and they may keep him out because they play again on Saturday at Milwaukee. Things sure would be easier for the Celtics if he would sit this game out.

Honorable Mention
Evan Turner vs Andre Iguodala
The Finals MVP is averaging 7.9 points, 4.6 rebounds, and 3.7 assists and is capable of having a big game off the bench. The Celtics will need Evan Turner to produce in this game as he tries to keep the Celtics bench ahead of their counterparts on the Warriors.

Keys to the Game
Defense - The Warriors can put up points quickly and in bunches. They lead the league with 115.8 points per game. It will be important for the Celtics to bring their defensive intensity into this game, especially to shut down the Warriors' fast breaks as they lead the league in fast break points with 21. The Celtics must especially guard the perimeter as the Warriors are very dangerous from beyond the arc, shooting 43.8% from 3. The Bulls allow 101.2 points per game and are 51-0 when they hold teams below 100 points (dating back to the 2014-15 season). The Celtics must execute on the defensive end of the court and play tough team defense if they have any hope of winning this game.

Take Care of the Ball - The Warriors can be very disruptive by getting into the passing lanes. The Celtics need to stay focused and not give the Warriors any easy opportunities to steal the ball or to get out on the break. If the Celtics get sloppy with the ball, the Warriors will make them pay.

Be Aggressive - The Celtics need to come out focused and play hard from start to finish. The Celtics have to be the more aggressive team throughout the game. They must be aggressive on defense, on the boards, in chasing down loose balls, and in taking the ball to the hoop and not settling for jumpers. They will need energy and extra effort from every player on the team.

Run, Run Run! - The Celtics play best when they run on every possession and run back on defense as well. The Warriors love to run and the Celtics have to match their effort and energy and keep up with the Warriors running game and even better, out run them.

Injuries - Klay Thompson's availability will be a big x-factor for this game. While the Warriors still have a lot of fire power without him, it does get easier for the Celtics if he can't play.

Officiating - As always, the officiating is an x-factor. Every crew officiates differently and teams never know what to expect. Sometimes they let them play and other times they call a foul on every possession. Some games they call evenly and others they favor one team or the other. It's like Forrest Gump's box of chocolate... you never know what you are going to get.

Official Report
Monty McCutchen
Monty McCutchen has officiated 1,310 regular season, 124 playoff, and 12 Finals games. He worked the 2007 NBA All-Star Game in Las Vegas and was a member of the crews that officiated the 1996 and 1997 Mexico Challenges, as well as the 1998 Schick Rookie Game. Prior to joining the NBA, McCutchen spent four seasons in the CBA, where he worked the All
Star game his second year and the playoffs all four years. He also officiated the CBA Finals the last three years he was with the league. McCutchen missed the 1998-99 season with a ruptured Achilles tendon.

The Celtics are 4-6 in their last 10 games with McCutchen on the court. Most of his games with the Celtics have been well officiated but there have been a few head scratching calls as well. He was the lead ref in one of the worst officiated games I've watched in a long time. In the LA Lakers vs Golden State Warriors a couple years back, the Lakers shot 50 free throws to 16 for the Warriors in a 2 point LA win. It was a key game for the Lakers playoff hopes and the referees literally gave them the game.

One play in particular stands out to me. In the final minutes with the game tied, Stephen Curry was called for an offensive foul on Dwight Howard, when it was clearly a foul on Howard. The worst part is that they put Steve Blake, a very good free throw shooter, on the line instead of Dwight, even though Blake wasn't involved in the play. It truly was a travesty and the announcers at the time were completely disgusted with it. It just proves that when they have an agenda, they will go to extreme lengths to accomplish it. Hopefully he doesn't feel that he owes one to the Warriors for that game. So, I guess the bottom line is that McCutchen can be very good, but he also can be very bad. The Warriors are 2-0 this season and 8-2 in their last 10 games with McCutchen. He calls an average of 40.4 fouls per game with 50% called on the home team. His home W/L record this season is 13-3.

Kane Fitzgerald
Fitzgerald has officiated 380 games and two Playoff games in his six seasons as an NBA official. Fitzgerald started refereeing at the age of 18 at the high school level in New Jersey. Prior to the NBA, he had professional experience in the NBA D-League for four years and the WNBA for two years. He also refereed NCAA Division I basketball in the Ohio Valley, Atlantic Sun and Big South Conferences for two years.

You may remember Fitzgerald from 4 seasons ago when he gave KG a very quick pair of technicals (from about 30 feet away) and tossed him in the 2nd quarter of the Celtics 104-101 win over the Knicks (in which Amare scored 30). In another outing that season with the Celtics, the loss to the Bobcats in Charlotte, he tossed Stephen Jackson after 2 quick questionable T's. His quickness in giving technicals dates back to his days in the D-league where he was close to the top in calling technical fouls there as well. Players need to behave themselves when he is calling the game.

You may also recall him for calling the Nets game that resulted in the brawl. Fitzgerald gave Doc a T for yelling instructions to Rondo. They let the Nets get away with pushing and shoving and hard fouls the entire first half. The Nets shot 17 free throws to 5 for the Celtics in the first half and 3 of those free throws were on technicals. They did better in the second half after the brawl, but the refs' failure to call the game evenly in the first half led to frustrations and the fight. This is Fitzgerald's second game this season calling the Celtics game. He officiated the Celtics first road game at Indiana which was called pretty much evenly. He also called the Celtics' win over the Bucks and the refs let them play in that game and it was well officiated. The Celtics are 1-1 this season and 4-6 in their last 10 games with Fitzgerald while the Warriors are 7-3 in their last 10. Fitzgerald calls an average of 41.5 fouls per game with 47.5% called on the home team. His home W/L record this season is 12-5.

Aaron Smith
Smith is listed as a non-staff official, whatever that means and is new to the NBA this season, so there isn't much information on him. As with most new refs, there is always the possibility that they can be swayed by the home fans or sometimes they go overboard in the opposite direction to prove that they aren't influenced by the fans. He spent 2 years calling games in the WNBA before this season. He called the Celtics' preseason game vs the Sixers. He also called the Celtics' win over the Bucks with Fitzgerald. In both games they let both teams play and called the games evenly. The Celtica are 2-0 over Smith's career. He has not officiated a Warriors game yet. Smith calls an average of 39.7 fouls per game with 44.5% called on the home team. His home W/L record this season is 4-2.