Celtics look to bounce back (to back) against the Detroit Pistons

The Celtics look to continue their 10 game win streak in back to back games on the road as they visit the Pistons.

Share All sharing options for: Celtics look to bounce back (to back) against the Detroit Pistons

The Celtics travel to take on the Detroit Pistions for the first of 4 meetings this season. They will meed on 1/6 and 2/3 in Boston and one more time on 12/26 in Detroit. The Celtics lost a tough and physical game against the Cavs on Tuesday night and had to travel after the game. The Pistons last played on Monday when they lost by 2 at home to the Clippers. The Celtics are 7-5 on the road, while the Pistons are 9-4 at home.

RJ Hunter returned at the end of the game against the Cavs and the Celtics will still be missing Marcus Smart. For the Pistons, Jodie Meeks is out with a foot injury and Brandon Jennings is out with an Achilles injury. Both teams lost their last game and are looking to get back on track with a win in this one. In spite of being just one loss apart, the Celtics are 7th in the East while the Pistons are 9th. 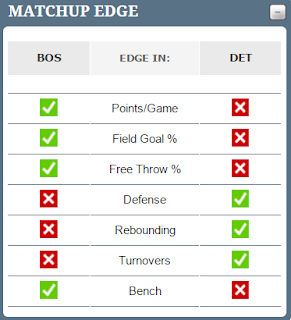 Isaiah Thomas vs Reggie Jackson
Jackson is very quick and is always a threat to drive to the basket. He is averaging 20.0 points, 4.2 rebounds, 6.4 assists and 1.2 steals. It will be up to the combo of Isaiah Thomas and Avery Bradley to slow him down on the offensive end.

Jared Sullinger vs Andre Drummond
Drummond is a beast in the paint on both ends of the court and is averaging 17.7 points, 16.3 rebounds, 2.0 steals, and 1.5 blocks per game. Last season in the 3 games against the Celtics, he averaged 22.3 point and 16.7 rebounds. Jared will definitely have his hands full trying to slow him down and to rebound against him.

Play as a Team - The Celtics have to play as a team and move the ball to find the open man. They have to defend as a team and rebound as a team. Hero ball rarely wins games and so they need to have each other's backs and play together.

X-Factors
Back to Back on the Road - As stated above, the Celtics have an incredible streak of 10 back to back wins on the road. It has become a point of pride with them and should give them motivation to do whatever it takes to get a win in this game.

Fatigue - In spite of the streak and the motivation, the Celtics played the night before and fatigue may catch up to them. Hopefully their depth will give them the extra boost to get a win.

Officiating - Officiating is always an X-Factor. Every crew calls the game a little differently. Some let them play and some call every little touch foul. The Celtics definitely do better when the refs let them play. Hopefully the refs will call the game fairly and let them play in this one.

Official Report
Eric Lewis
Lewis has spent the last 11 seasons in the NBA, officiating 618 regular season games and 14 playoff games. Lewis spent two years working in the USBL, officiating the Finals in 2002 and 2004. Prior to that he spent three seasons in the NBA D-League, where he worked the 2003 and 2004 Playoffs and 2004 Finals. He tallied eight years in the college ranks, participating in the Atlantic Sun, Ohio Valley, Sunshine State, Florida Sun and Mid-Florida conferences. Lewis officiated in Florida high schools for six years.

With the exception of a Cavs game that was called pretty much one sided, and the Hawks game last season that was also called one sided toward the Hawks down the stretch, Lewis has been pretty good in calling the Celtics games. The Celtics are 0-1 this season and 4-6 over their last 10 games with Lewis. The Pistons are 1-9 over their last 10. Lewis calls an average of 42.3 fouls per game with 50.3% called on the road team. His home W/L record is 8-11.

She also officiated various FIBA competitions, including the 2010 World University Games, and the 2012 and 2013 FIBA Americas Championships. Holtkamp graduated with a Bachelor of Arts in Business Administration in 2003 and a Master
of Arts in Communication in 2004 from Drury University where she was a member of the 2003 Women’s basketball team that competed for the 2003 Division II National Championship. She went on to earn her master of divinity from Emory University in 2010.

The Celtics are 1-0 this season and 1-3 over Holtcamp's career while the Pistons are 4-2 over her career in the NBA. In a game against Milwaukee last season, that she called the officiating was particularly terrible. There were missed calls on both sides all night. Even the Bucks fans were mentioning how they were getting all the calls and they couldn't believe it. Tommy was livid through the entire game and at one point said, "These refs shouldn't be calling a high school game. Tell girlie to get on home." He later apologized for calling her girlie, but wouldn't back down about how bad the refs were in that game. She called the game this season vs OKC and the officiating was pretty good overall with a few bad calls going both ways. They pretty much let them play. Holtcamp calls an average of 40.9 fouls per game with 54.2% called on the road team. Her home W/L record this season is 10-7.

Courtney Kirkland
Over the past 15 seasons, Courtney Kirkland has officiated 911 regular season games and 7 playoff games. He also officiated two seasons in the WNBA, including the 2000 WNBA Finals and the 1999 Conference Finals. Kirkland also officiated the 2010 and 2011 Venezuelan LPB basketball championships. Prior to joining the NBA, Kirkland worked three seasons in the CBA where he officiated the 1999 and 2000 CBA Finals as well as the 2000 CBA All-Star Game. He was a high school official for four years as a member of the Baton Rouge (La.) Basketball Officials Association and was named Rookie Official of the Year in 1994.

Kirkland earned some measure of notoriety when he jumped in to block a Kris Humphries free throw in a Nets game two seasons ago. Last season in a game vs the Grizzlies, there were quite a few terrible calls. One of the worst was when the ball hit the rim and the Celtics tipped it in and they called a 24 second violation without checking on the monitors in spite of pleas by every Celtic to do so. There were a lot of head scratching calls and non-calls in that game. In the win over the Pacers last season the free throw differential wasn't bad with 18 for the Celtics and 23 for the Pacers, but there were quite a few head scratching calls prompting "That's terrible!!" from Tommy several times. Then, in a game vs the Pistons last season, the Celtics shot 34 free throws to 10 for the Pistons and the Celtics got the benefit of many of the questionable calls. The Celtics are 0-1 this season and 5-5 in their last 10 games that Kirkland officiated. He can be good or bad depending on the game. The Pistons are 1-0 this season and 4-6 in their last 10 games with Kirkland. Kirkland calls an average of 39.6 fouls per game and 54.1% are called on the road team. His home W/L record this season is 10-9.