The Celtics continue their road trip and look to be the first team to win on the Spurs court this season.

Share All sharing options for: Celtics look to continue winning ways on the road as they take on the Spurs

The Celtics continue their road trip against one of the hottest teams in the league, the San Antonio Spurs. The Spurs are 10-0 at home and have won their last 19 at the AT&T Center dating back to last season. They are 8-2 in their last 10 games while the Celtics are 6-4 in their last 10 and 5-4 on the road.

The Celtics are coming off a 2 impressive wins over Miami and Sacramento after a disappointing loss to Orlando to begin the trip. The Spurs are 1-0 against the Celtics this season after winning 95-87 in Boston. In that game, Tim Duncan, Manu Ginobili and Tony Parker passed the Celtics big 3 of Bird, McHale and Parish for the most regular season wins as a trio with 541.

The Spurs are very tough to beat and even more so in their own building. But the Thunder, Wizards, Pelicans, and Bulls have all beaten them, even if it was on the road, and the Celtics could very well be the team to get a win on the Spurs home court. They will need to play their best if they hope to get a win in this game, however. 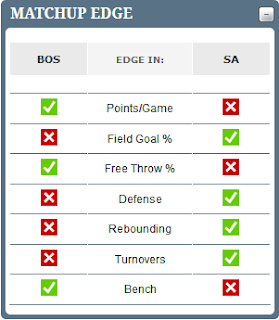 Jae Crowder vs Kawhi Leonard
Leonard had become a star for the Spurs. He leads the team in both points (21.7ppg) and also adds 7.5 rebounds and 1.8 steals and 1.2 blocks per game. In the Spurs win over Memphis on Thursday, Leonard hit 7-9 from beyond the arc to score 27 points. He is shooting 51.3% from the field and 50.0% from beyond the arc. Jae's defense will be tested as he tries to slow down the Spurs top player.

Amir Johnson/Jared Sullinger vs LaMarcus Aldridge/Tim Duncan
The Spurs have a tough front court with two tough veterans playing very well It doesn't get easier as Sully goes from DeMarcus Cousins to Tim Duncan who is averaging 10.1 points, 9.1 rebounds, and 1/6 blocks. Amir Johnson will have his hands full with LaMarcus Aldridge who is averaging 14.6 points, 9.2 rebounds and 1.2 blocks per game. In the first game against the Celtics, Aldridge had his coming out party as a Spur with 24 points, 14 rebounds, and 5 assists.

Honorable Mention
Evan Turner vs Manu Ginobili
Turner has been playing very well off the bench for the Celtics and has made a difference for the Celtics in their wins on this trip. He will be facing one of the best sixth men in the league in Manu Ginobili. Evan will need to use his quickness to get the best of this matchup.

Move the Ball Carefully - The Celtics play best when they move the ball and find the open man. In their win over the Kings, they had 34 assists on 40 made baskets. They are tied with the Spurs for 3rd in the league with 24.8 assists per game. The Celtics need to continue to keep the ball moving but they also need to make careful passes and not turn the ball over. The Celtics average 16.1 turnovers per game compared to 14.3 for the Spurs.


Defense - Both of these teams pride themselves in playing tough defense. However, the Spurs are on a whole different level when it comes to defense. The Spurs lead the league in allowing opponents to score just 88.5 points per game. In San Antonio, they are even stingier allowing only 83.7 points per game. The Celtics are 7th in the league allowing 97.5 ppg. The Spurs have some scorers on their team and so the Celtics must lock down on defense both inside and on the perimeter if they want to get a win.

Make some Baskets - In some games, it seems like the Celtics just can't throw the ball in the ocean. In other games they can't seem to miss. In their last two games on this road trip, the Celtics have averaged 109.5 points on 47.5% shooting. The Celtics are 7-1 when shooting at least 44% from the field. They have to focus and not allow the Spurs defense to take them out of their game.

X-Factors
Road Game and Fatigue - One of the toughest arenas to win in is the AT&T Center where the Spurs are 10-0 this season. The Celtics have to block out all distractions and play their game. Also, on the 4th game of a 5 game road trip, with a detour to Mexico City, the Celtics may be getting fatigued. Hopefully their depth will help overcome that fatigue.

Officiating - The officiating is always an x-factor. Each crew officiates differently and sometimes, whether due to an agenda, personal preferences or league dictate, the way the game is officiated can affect one or both teams. We can only hope for a fairly officated game where they let them play.

There are two very badly called games that Washington called that come to mind. In a loss to the Pistons three seasons ago, Detroit shot 46 free throws to 15 for the Celtics, Rondo was ejected, and Tommy Heinsohn called it the worst officiated game all season (are you cringing yet?). In Game 2 vs the Heat in the 2012 playoffs, the Heat shot 47 free throws to 29 for the Celtics, in spite of the Celtics attacking the basket all night. There were bad calls throughout the 4th quarter and OT, all in the Heat's favor. Pierce, Pietrus, and Dooling all fouled out. LeBron was given 24 free throws all by himself. Last season in a game vs the Magic, he was terrible. There was a flagrant 2 call on Smart, which was later downgraded. There was also a terrible flagrant 1 call on Isaiah Thomas that was also later downgraded. The officiating was one sided in Orlando's favor all game. Orlando shot 30 free throws to 16 for the Celtics.

Derrick Collins
Derrick Collins has officiated 871 regular season games and 16 Playoff games in 14 NBA seasons. Prior to joining the NBA, he officiated five seasons in the CBA where he worked two Finals, and three seasons in the WNBA, working three WNBA Playoffs and Finals. He has seven years of collegiate officiating experience in various conferences (Big 12, Sun Belt, Conference USA, Southland, SEC, TAAC, OVC and SWAC), and he officiated a Southland Conference semifinal game. Collins also officiated at the high school level in Louisiana. There is very little controversy around Collins. In the Wolves game last season, most of the calls went their way and the Wolves shot 32 free throws to just 9 for the Celtics but Collins has been decent for the most part. The Celtics are 0-1 this season and 3-7 in their last 10 games with Collins while the Spurs are 1-0 this season and 6-4 in their last 10. His home W/L record this season is 6-9.

Gediminas Petraitis
Gediminas Petraitis is entering his first season as a full-time NBA official. Prior to joining the NBA, Gediminas officiated three years in the NBA Development League, working 2015 NBA D-League Finals, as well as working 12 regular season NBA games as a non-staff official. Additionally, Petraitis officiated three years of Division 1 basketball, mainly working in the Big South Conference, while also being a member of AAC officiating staff. Petraitis also officiated in various Division 2, 3 and Junior College leagues. Gediminas began his refereeing career at the high school level in Maryland, where he is a member of IAABO Board 12. He also serves as a FIBA Basketball Referee.

Petraitis called the Celtics win at the Nets in the preseason as well as 2 games for the Spurs in the preseason, both losses. He called the first game between the Spurs and the Celtics in Boston along with lead official, Danny Crawford. In that game, they allowed the Spurs to get away with a lot of contact: pushing, grabbing, hacking etc. At the half, The Spurs had shot 14 free throws to 3 for the Celtics. Boston had 52 points in the paint compared to 38 for the Spurs and the Celtics were being aggressive in going to the basket. In spite of that, the Spurs finished with 25 free throws to 14 for the Celtics. They let a lot go on both sides overall, but did favor the Spurs. Sometimes new referees will be intimidated by the home crowd and sometimes they go the opposite way just to prove they aren't intimidated. With his home W/L record of 4-7, it seems more like the latter. The Celtics are 1-1 all time with Petraitis while the Spurs are 1-2 over Petraitis' career. His home W/L record this season is 4-7.