The Celtics return home from a successful road trip to host the Chicago Bulls.

Share All sharing options for: Celtics return home to host the Chicago Bulls

The Celtics return from their successful 5 game road trip to host the Chicago Bulls. This is the first of 3 games between these two teams this season. The Bulls won the season series 3-1 last season. The Celtics won once in Chicago while the Bulls won once at home and both games in Boston.

For the Bulls' final win in Boston last season, Jared Sullinger, Evan Turner, and James Young were all out for the Celtics and Chris Douglas Roberts, Tayshaun Prince, and Shavlik Randolph had just become Celtics.

The Celtics haven't won a season series from the Bulls since 2008-09 when they won the series 2-1. The Bulls are 14-10 since that season. The Bulls are missing Mike Dunleavy, who is out with a back injury. The Celtics will be without Marcus Smart once again and RJ Hunter (hip) and David Lee (heel) are day to day. The Celtics have recalled Jordan Mickey from the Red Claws and hopefully we will get to see him play at least a little in this one.

For the second game in a row, this game will be on national TV. This will be the first game this season on ESPN. It will also be on at an earlier time at 7:00 PM ET.

Injuries
Mike Dunleavy (back) out 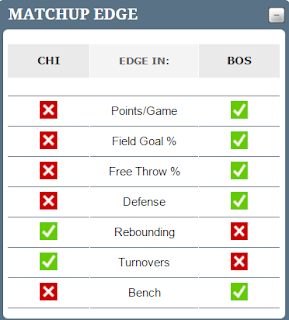 Avery Bradley vs Jimmy Butler
Butler has surpassed Rose as the star of this team. He is averaging 20.4 points, 5.2 rebounds, 3.3 assists, and 1.89 steals. Avery's defense will be put to the test in this game.

Jared Sullinger vs Pau Gasol
Gasol is having a good season and has had some big games. He is averaging 14.8 pionts, 10.8 rebounds and 2.17 blocks. Sully is coming off a huge game against the Pelicans and hopefully that will carry over to this game.

Honorable Mention
Isaiah Thomas vs Derrick Rose
Rose isn't exactly the player he was before the knee injuries interrupted his career, but he is still a very good player and very dangerous if you don't defend him well. He is averaging 13.7 points, 5.9 assists, and 3.7 rebounds per game.

Rebound - The Celtics can't score if they don't have the ball. Rebounding will be tough against Chicago's big front line, but much of rebounding is effort and desire and so the Celtics must put out the extra effort on the boards to give themselves extra possessions as well as to limit the Bulls fast break opportunities and second chance points. The Bulls are a good rebounding team, pulling down 48.3 per game while the Celtics are averaging 43.6 rebounds per game.

Run and Move the Ball - The Celtics play best when they run on every possession and run back on defense to get set before the Bulls can get into their offense. They also need to move the ball because when the ball sticks too much with one player then the offense gets stagnant.

Be Aggressive - The Celtics must be aggressive on both ends of the court. They have to be the more aggressive team going for loose balls, on defense, on the boards, and in going to the hoop. In their wins, the Celtics have been aggressive but in their losses they mostly seem sluggish. They have to play like they want it more.

X-Factors
First Game Back Home - The first game at home is often a tough game, whether it is jet lag of some sort or possibly a let down from finally being back into their familiar surroundings. The Celtics need to feed off of the energy of the crowd to give them extra energy.

Foster came into the public eye as the best friend of former referee Tim Donaghy. In his book, Donaghy describes Foster as a very honest and good guy who knew nothing of his gambling. However, recently Donaghy described Foster as a company man who will do what is asked of him to keep his seniority among refs. Foster was part of the 2010 Finals game 7 officiating crew that called the final quarter completely different than the first 3 quarters and very one sided for the Lakers with 21 free throws for the Lakers and 6 for the Celtics in the final 12 minutes.

Foster leaded the officiating crew that called the game vs the Bucks this season. They let both teams play with the Celtics shooting 19 free throws to 23 for the Bucks. It was evenly officiated with both teams being allowed to play without being called for ticky tack fouls. Foster averages 39.9 fouls called per game with 49.3% of those on the home team. The Celtics are 1-0 this season, but just 3-7 in their last 10 games with Foster. The Bulls are 1-0 this season and 7-3 in their last 10. His home W/L record this season is 10-7.

Curtis Blair
Curtis Blair is entering his ninth NBA season having officiated 383 regular season games. Blair has six seasons of NBA D-League experience and worked the 2008 NBA D-League Finals. He also officiated in several college conferences, including the Atlantic 10, Atlantic Coast Conference and the CAA. He was drafted by the Houston Rockets in 1992 and played professionally in Australia, Austria and Turkey.

Like most refs, Blair has been good and bad in previous Celtics games. In a Clippers game last season, he ignored fouls by the Clippers and called phantom fouls on the Celtics all game. Tommy made the comment that the Celtics had no shot to win after the officiating took over. In his final game with the Celtics last season against OKC, the game was called fairly in the first half, but in the third quarter, OKC took 15 free throws to 4 for the Celtics with many bad calls going in favor of the Thunder. The 4th was again called fairly evenly, but with every ticky tack foul called, there was no flow to the game. Blair calls an average of 45.2 fouls per game with 49.5% of those being called on the home team. The Celtics are 2-8 in their last 10 games with Blair while the Bulls are 5-5 in their last 10. His home W/L record is 9-5.

Tony Brown
Tony Brown has officiated 777 regular season games and eight- Playoff games in his first 13 seasons as an NBA official. Prior to joining the NBA, he officiated for four seasons in the NBA D-League and CBA and three seasons in the WNBA. During that time he worked the 2002 Finals, the 2002 WNBA All-Star Game and the 2001 CBA Finals. As with most refs, Brown has been good and bad in past games with the Celtics. In some the officiating is one sided and in others very good. Brown called Game 1 of the Rockets/Mavs playoff series and it was very one sided against the Mavs. The Rockets shot 45 free throws to 17 for the Mavs. Of course, he called the game with Joey Crawford and that could account for a lot of the controversial calls.

"Curious sequence there. Phantom foul on Bradley, Lee gets mugged - no call, and ticky tack foul on Lee"
"I'd be pissed if I was a Celtics fan at this officiating."
"I'll take the win but without the refs help, we lose this one."