The Celtics resume the second half of their season with a visit to the Sacramento Kings.

Share All sharing options for: Celtics second half begins with a visit to Boogie and the Kings

The Celtics resume the second half of their season with a visit to the Sacramento Kings. Both teams made last minute trades at the deadline and may be a bit short handed. This is the second and final game this season between these two teams. Boston won the first meeting in Boston 106-84. In that game, both Jared Sullinger and Marcus Smart got under DeMarcus Cousins' skin resulting in two technicals and his ejection from the game.

In that game, Cousins threw Smart to the floor after the latter had aggressively boxed him out and then tried to run through him on a pick. Cousins threatened to "get him after the game," but nothing of that sort happened. It’ll be interesting to see how this game plays out. This will be George Karl's first game as the Kings head coach and Cousins and his teammates will probably be trying to impress their new coach.

In the last game, Jared Sullinger kept Cousins under control, while coming up big for the Celtics. Sully had 20 points and 11 rebounds while holding Cousins to 11 points and 11 rebounds. Sullinger will miss this game with a stress reaction in his foot and the Celtics will definitely miss him. Kelly Olynyk is also expected to miss the game with the ankle injury that has kept him out the past 11 games.

For Sacramento, their point guard position is in question. They traded their back up point guard, Ramon Sessions for Andre Miller. Their starting point guard, Darren Collison has missed the past 3 games with a hip flexor and is listed as questionable for this game. Andre Miller may or may not be in uniform and if Collison can't play, their third string point guard, Ray McCallum may get the start.

A bit of ironic history from Sean Grande: On 3/16/12, the Celtics lost in Sacramento by 25, the 4th worst loss of the era. The Kings best players? Marcus Thornton and Isaiah Thomas.

New Guy who may or may not play
Andre Miller 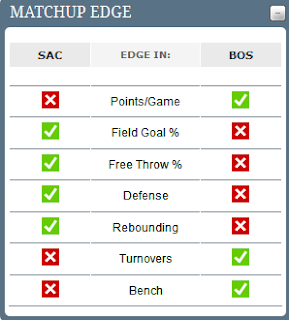 Tyler Zeller vs DeMarcus Cousins
Cousins is the Kings best player and a force on both defense and offense. He is averaging 23.8 points, 12.5 rebounds and 1.7 blocks. The Celtics will miss Jared's defense on him. The likely candidate to start in Sully's place is Tyler Zeller, who will have his hands full with Cousins. We may even get a Shavlik Randolph sighting.

Evan Turner vs Rudy Gay
Gay is playing well for the Kings, averaging 19.9 points, 5.9 rebounds, 3.9 assists and 1.06 steals. Turner will have his hands full trying to contain him as well as making him work on the defensive end.

Honorable Mention
Brad Stevens vs George Karl
Both coaches have had plenty of time to prepare for this game and both coaches will have the challenge of filling in for injured or traded players. Karl will be coaching his first game for the Kings and that could give him a boost as they try to impress their new coach.

Keys to the Game
Rebound - Much of rebounding is effort and desire. The Celtics have to put out extra effort to grab the rebounds on both ends of the court. By doing so, they limit the second chance points and fast breaks for the Kings and also give themselves extra possessions. It will be even more important for every player to make an extra effort on the boards to make up for their best rebounder being out.

Defense - The Celtics tend to allow way too many open looks and easy points. They have to make playing defense as a team a priority. Defense not only wins championship, it wins games as well. They have to defend the paint to keep Cousins especially away from the basket as well as closing out on the 3 point shooters.

Start Strong and Play 48 Minutes - The Celtics have had very sluggish first quarters in their past few games. They need to come out strong and get off to a good start. It's tough to dig out from a big hole when they start off slowly. They also have to keep their effort up for 48 minutes and can't slack off in the middle and have to play hard until the final buzzer.

X-Factors
Focus and Short Handed
The Celtics are a young team, even younger than they were before the break, and young teams struggle with focus on the road. They have to work to keep their focus throughout the game. They can move past the distractions of the trade deadline and just focus on playing hard. Both teams may be short handed with players traded probably not playing and others out with injury.

In his last game with the Celtics against the Cavs, the refs called the game fairly even for 3 quarters and then very one sided for the Cavs in the 4th quarter with the final free throw disparity 37-23 in favor of the Cavs. There were several obvious bad calls against the Celtics that even Cavs fans questioned. The Celtics are 1-4 this season and 3-7 in their last 10 games with Spooner while the Kings are 2-3 this season and 4-6 in their last 10. His home team W/L record this season is 19-23 so he's not easily influenced by the home crowd.

Kane Fitzgerald
Fitzgerald has officiated 313 games in his five seasons as an NBA official. Fitzgerald started refereeing at the age of 18 at the high school level in New Jersey. Prior to the NBA, he had professional experience in the NBA D-League for four years and the WNBA for two years. He also refereed NCAA Division I basketball in the Ohio Valley, Atlantic Sun and Big South Conferences for two years. You may remember Fitzgerald from 4 seasons ago when he gave KG a very quick pair of technicals (from about 30 feet away) and tossed him in the 2nd quarter of the Celtics 104-101 win over the Knicks (in which Amare scored 30). In another outing that season with the Celtics, the loss to the Bobcats in Charlotte, he tossed Stephen Jackson after 2 quick questionable T's. His quickness in giving technicals dates back to his days in the D-league where he was close to the top in calling technical fouls there as well.

You may also recall him for calling the Nets game that resulted in the brawl. Fitzgerald gave Doc a T for yelling instructions to Rondo. They let the Nets get away with pushing and shoving and hard fouls the entire first half. The Nets shot 17 free throws to 5 for the Celtics in the first half and 3 of those free throws were on technicals. They did better in the second half after the brawl, but the refs' failure to call the game evenly in the first half led to frustrations and the fight. The Celtics are 3-1 this season and 3-7 in their last 10 games with Fitzgerald. The Kings are 1-3 this season and 1-9 in their last 10 with Fitzgerald calling the game. His home W/L record this season is 25-19.

Kogut has called games that favored the Celtics and some where the Celtics couldn't get a call and some others where they were called evenly. I guess it depends on his mood. The Celtics are 2-3 this season and 3-7 in their last 10 games with Kogut. He called the loss to the Cavs earlier this season where the game was called evenly through 3 quarters and then completely one sided for the Cavs in the 4th quarter. He ignored a push off and elbow below the belt by LeBron on Jeff Green and instead called the foul on Green. Cleveland shot 37 free throws to 23 for the Celtics. The Kings are 3-3 this season are 4-6 in their last 10 games with Kogut. His home W/L record is 18-18.