Isaiah Thomas and the Celtics close out road trip in Phoenix

The Celtics complete their 3 game western road trip with a visit to the Phoenix Suns.

Share All sharing options for: Isaiah Thomas and the Celtics close out road trip in Phoenix

The Celtics complete their 3 game western road trip with a visit to the Phoenix Suns. This is the second of two games between these two teams. The Suns won the first meeting 118-114 in Boston back in November. Both teams have undergone considerable roster changes since that game. Only 8 Suns players remain from the 15 that were on their opening night roster.

The Suns won the season series 2-0 last season and have won 3 straight against the Celtics overall. The Celtics are playing in back to back games, having lost in OT against the long time rival Lakers on Sunday night.

The Celtics and Suns will forever be linked by Game 5 of the 1976 Finals, which is one of the greatest games ever played. Boston won the triple overtime game 128-126 at the Boston Garden after Garfield Heard hit the "shot heard round the world" to send the game into the 3rd OT. 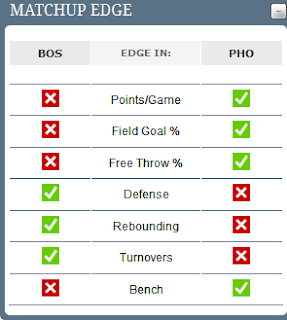 Marcus Smart vs Eric Bledsoe
This will be a good test for the Celtics' rookie point guard. Bledsoe is averaging 17 points, 5.9 assists and 1.67 steals. Smart needs to play tough defense to keep him from getting the Suns into their offense quickly.

Brandon Bass vs Markieff Morris
Morris has been playing well, averaging 15.4 points, 5.9 rebounds and 1.2 steals per game. He is also shooting a league best 57.7% in the final 2 minutes of single possession games so if it's a close game, the Celtics need to play especially close attention to him. In the first game between these two teams, Morris finished with a game high 30 points.

Honorable Mention
Avery Bradley vs Gerald Green
Former Celtic Gerald Green is averaging 12.5 points per game mostly off the bench for the Suns. This is just his 4th start for the season and he Has started
three times this season and he averaged 13.0 points and 5.3 rebounds in the previous 3 starts. He can catch on fire and have a big game if not closely guarded.

Isaiah Thomas vs Brandon Knight
Both are new point guards on their respective teams. Both have played in just one game for their new teams so far. Knight scored 13 points with 5 assists in his debut while Isaiah Thomas finished with 21 points, 5 rebounds, 3 assists, 2 steals and 1 ejection.

Keys to the Game
Play 48 Minutes - The Celtics have to start strong because they can't expect to dig themselves out of a hole on the second night of a back to back. They need to keep their focus from the opening tip to the final buzzer and continue to play hard. No let ups!

Run, Run, Run! - The Suns are a running team and are 2nd in the league in fast break points with 17.3. If the Celtics want to keep up with them, they are going to need to run as well in spite of being tired from playing the night before.

Defense - Defense is always a key to winning. The Celtics will need to play tough team defense if they want to slow down the fast paced Suns offense. The Suns are 3rd in the league in scoring at 106.0 points per game. They are also 3rd to last in points allowed at 105.0 points per game. The Celtics have got to get stops as they won't outscore the Suns in a shoot out. You can't win without defense.

X-Factors
Revenge Factor and Fatigue
The Suns have 3 former Celtics on their team and the Celtics have 2 former Suns on their team. Could this be the Wright/Thornton/Green revenge game or will it be the Isaiah Thomas and Shavlik Randolph revenge game? Fatigue may come into play down the stretch as the Celtics play in the second of back to back games on the road after a tough OT loss the night before. Tyler Zeller played a season high 36 points and Brandon Bass played a season high 40 points and so they may run out of gas down the stretch if they have to play big minutes again in this one.

Joey Crawford
A game after Tony Brothers, who is usually a good ref, made some of the worst calls all game against the Celtics, it's not all that comforting to see Joey Crawford as the lead ref in this one. Joey Crawford is perhaps the one ref that evokes fear and loathing at the mention of his name. Over more than three decades in the NBA, Joe Crawford has officiated 2,500 regular season and 331 Playoff games, including 49 NBA Finals games. Crawford’s Playoff and NBA Finals totals are the most among active NBA officials. Over his career, Crawford has officiated the 1986, 1992 and 2000 NBA All-Star Games, as well as the 1993 McDonald’s Championship in Munich, Germany. Prior to joining the NBA, Crawford officiated in the Eastern League (CBA) from 1974-76.

He is widely viewed as one of the refs in the NBA who can officiate with an agenda and shows his biases on the court, hence the controversy that seems to follow him throughout his career. The Celtics are 1-1 this season and 3-7 in their last 10 games with Crawford. He hasn't been particularly bad or biased in any of the Celtics recent games. However, Joey Crawford is like the proverbial box of chocolates. You never know what you're going to get on any given night. He is one referee in the league who doesn't seem to be influenced by the home crowd. In fact, at times he seems to delight in antagonizing the home fans. The Suns are also 1-1 this season and 3-7 in their last 10 games with Crawford. His home W/L record this season is 18-15. Here is Joey at his best, making the game all about him.

Tony Brown
Tony Brown has officiated 716 regular season games and five- Playoff games in his first 12 seasons as an NBA official. Prior to joining the NBA, he officiated for four seasons in the NBA D-League and CBA and three seasons in the WNBA. During that time he worked the 2002 Finals, the 2002 WNBA All-Star Game and the 2001 CBA Finals. As with most refs, Brown has been good and bad in past games with the Celtics. In some the officiating is one sided and in others very good. The Celtics are 2-0 this season and they are 4-6 in their last 10 games with him as a ref. The Suns are 2-1 this season and 4-6 in their last 10 games with Brown. His home W/L record this season is 20-19.

Tre Maddox
Tre Maddox enters his fourth NBA season having officiated 152 regular season games. Maddox’s experience includes four seasons and 158 games officiated in the D-League. He also has five seasons of NBA preseason game experienece and worked in NBA summer camps for five years.
In addition to his professional experience, Maddox officiated collegiate games for six years in the PAC 10, West Coast and Pac West Conferences and has eight years of high school officiating experience. The Celtics are 1-3 this season and 6-4 in their last 10 games with Maddox as a ref. He has been a decent ref for most of those. but in their last game vs the Hawks, that the Celtics won, there were quite a few terrible calls down the stretch. They ignored obvious fouls by the Hawks and called ticky tack fouls and phantom fouls on the Celtics. The Suns are 3-2 this season and 7-3 in their last 10 games with Maddox. His home W/L record this season is 23-17.