The Celtics will try to avoid a 4 game losing streak as they visit the Knicks who are looking for their 5th straight win at home.

Share All sharing options for: The slumping Celtics visit the surging Knicks

After two games at home the Celtics head back on the road for one game to visit the New York Knicks. This is the second of 4 meetings between these two division foes. The Knicks won the first game in December 101-95. They meet on February 25 in Boston and finally on March 27 again in New York. These two teams have been heading in opposite directions over their last few games. The Knicks have been playing their best ball of the season while the Celtics have been going backwards.

The Celtics seemed to have turned a corner when they went 3-3 on their tough Western road trip but since returning home, they lost two very winnable games. Part of the reason for their home losses was a failure to come out playing hard from the start and a lack of effort and focus overall. They need to turn that around if they expect to win this game.

The Celtics are a bit banged up with Kelly Olynyk still out and Evan Turner and Avery Bradley playing through hand injuries. Tayshaun Prince missed their last game with a hip flexor and is a game time decision in this game. Not that he was playing anyway, but Shavlik Randolph is expected to be out with a hamstring injury. The Knicks are expected to have Stoudemire (ankle), Bargnani (calf), Aldrich (shin) and Wear (hip) out.

The Knicks success could be attributed to the JR Smith effect. They seem to be playing much better since they traded JR Smith and Iman Shumpert to the Cavs. Andre Dawkins has been recalled from the Red Claws and is with the team on the trip. We may get our first look at the him in this game. Also, Stevens hinted at James Young getting more playing time in the near future and that may start with this game. 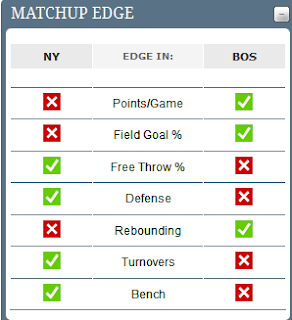 Brandon Bass vs Carmelo Anthony
Carmelo Anthony had led the Knicks resurgence with 24.1 points, 6.6 rebounds, and 3.1 assists and is dangerous from everywhere on the court. Bass will need to slow Melo down while also making him work on defense.

Calderon comes into this game averaging 9 points, 3.2 rebounds and 4.6 assists but he is capable of having a big game if not defended well. On the other end, Avery will need to find a way to score himself.

Keys to the Game
Defense - Playing tough team defense is the key to winning every game. The Celtics need to concentrate on getting stops and keeping the Knicks' offense off balance. In the last two games, they flashed the kind of defense they are capable of in the third quarter but they have to play that kind of defense for the whole game. In their last 7 games, the Knicks have been shooting 56.4% on corner 3's and so the Celtics are going to have to especially guard the perimeter.

Set the Pace - The Celtics need to run on every possession from start to finish. It seems that when they run they build leads and outplay the other team. When they slow it down, they fall behind and lose leads. They have to run and set the pace of the game. The Knicks give up 100.2 points per game and so if the Celtics can push the pace, they should be able to get some open shots.

Be Aggressive - The Celtics needs to be the more aggressive team. They have to be more aggressive in going after loose balls, in grabbing rebounds, in defending, and in going to the basket. They lacked aggression against the Heat and lost the game because of it.

X-Factors
Road Game and Focus
The Celtics proved that they can win on the road when they won 3 games on their recent road trip. But, young teams struggle with focus on the road and so they will need to work to keep their focus and their energy. Also, they have lost 3 games in a row and should be focused on winning this game to avoid a 4 game losing streak.

The Celtics are 0-1 this season and 4-6 in their last 10 games with Mauer officiating. In the 2012 ECF Game 2 vs the Heat, the Heat shot 47 free throws to 29 for the Celtics. He failed to call a foul on Wade for hitting Rondo in the head on a layup even though he was in position to see it clearly. He also failed to call a foul on Wade for kicking KG who was going up for a layup when he was again the ref in position to do so. He called a questionable clear path foul on Pietrus. Pierce fouled out on a very questionable call, joining Pietrus and Dooling with 6 fouls. LeBron James took 24 free throws himself.

In a win last season vs the Raptors, the Celtics shot 35 free throws to 19 for the Raptors and the calls seemed to favor the Celtics. In 3 other games with Mauer last season, they let them play and the officiating was even. It's hard to tell which Mauer will show up, the one that lets them play and is fair or the one that tries to micromanage the game and make it about himself. The Knicks are 0-3 this season and 4-6 in the last 10 games with Mauer. He is a veteran official that isn't usually swayed by the home crowd. His home W/L record this season is 16-19.

Eric Lewis
Lewis has spent the last 10 seasons in the NBA, officiating 618 regular season games and 14 playoff games. Lewis spent two years working in the USBL, officiating the Finals in 2002 and 2004. Prior to that he spent three seasons in the NBA D-League, where he worked the 2003 and 2004 Playoffs and 2004 Finals. He tallied eight years in the college ranks, participating in the Atlantic Sun, Ohio Valley, Sunshine State, Florida Sun and Mid-Florida conferences. Lewis officiated in Florida high schools for six years. With the exception of a Cavs game that was called pretty much one sided, Lewis has been pretty good in calling the Celtics games. The Celtics are 0-3 this season and 3-7 in their last 10 games with Lewis. The Knicks are 1-2 this season and 6-4 in their last 10 with Lewis. His home W/L record is 19-19.

Eli Roe
Eli Roe
Eli Roe has officiated 499 regular season games during his first nine NBA seasons. Prior to joining the NBA staff, Roe officiated in the CBA, NBA Development League and WNBA. He officiated in the NBA D-League Finals for two years, the D-League playoffs for four years and the WNBA Playoffs for two years. At the collegiate level, Roe refereed in the SEC, ASUN and OVC conferences and numerous Division II and III, NAIA and Juco league games. He also worked in four Division I postseason conference tournaments.

Roe tends to be inconsistent in his calls and can make the calls favor one team over another on any given night. He is also inconsistent with block/charge calls. In Roe's final game with the Celtics last season, a win over the Clippers, Roe made so many bad calls that Tommy yelled "Eli! I hate Eli! I hate him!" Two other games with Roe last season were well officiated. The Celtics are 6-4 in their last 10 games with Roe. The Knicks are 5-5 in their last 10 games with Roe. This is his first game with both teams this season. Roe's home W/L record this season is 21-14.