The Celtics come back home after a win over the Knicks looking to build on that win as they host the Denver Nuggets. Both teams are playing in back to back games and both teams had to travel overnight.

This is the second and final meeting between these two teams. The Celtics won the first game 100-99 when former Celtic Jameer Nelson missed the potential game winner at the buzzer. Ty Lawson missed that game because of a DUI the night before and so the Celtics can expect a slightly tougher time with them in this game.

Brad Stevens shook up the starting lineup for Tuesday's game against the Knicks by moving Marcus Smart in to the starting point guard spot and shifting Evan Turner to small forward. That lineup seemed to be successful as the Celtics led the Knicks wire to wire in their 108-97 win and so I would expect the same lineup to start in this one. Denver, on the other hand, lost to the tanking Sixers 105-98. They have also lost 10 of their last 11 games.

Tayshaun Prince missed his second game in a row on Tuesday and remains day to day for this game. Evan Turner and Avery Bradley continue to play through hand injuries. Kelly Olynyk and Shavlik Randolph are both out. For the Knicks, JaVale McGee is questionable with an illness. 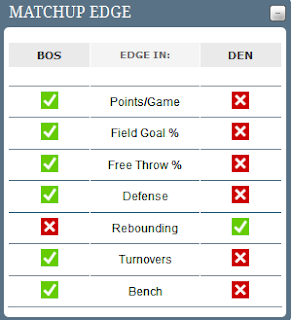 Marcus Smart vs Ty Lawson
Lawson is averaging 16.5 points, 3.2 rebounds and 9.9 assists and slowing him down will be key to keeping the Nuggets from getting into their offense quickly. This will be a matchup between two tough and physical guards and should be fun to watch.

Brandon Bass vs Kenneth Faried
Faried has a motor that doesn't quit. He reminds me of Jae Crowder in some ways. He is averaging 11.9 points, 8.9 rebounds and 1.3 assists. He had 11 points and 14 rebounds in the first game between these two teams. The Celtics especially need to keep him off the boards.

Honorable Mention
Avery Bradley vs Arron Afflalo
Afflalo has played very well against the Celtics. He is averaging 19.8 games in his last 5 games vs the Celtics, including 20 in the Celtics 1 point win in Denver. Avery will need to slow him down in this game.

Keys to the Game
Defense - Defense is the key to winning every game. Against the Nuggets, transition defense is especially important because the Nuggets will run them out of the building if they don't find a way to get stops.

Go to the Hoop- The Celtics need to get the ball inside and not settle for outside shots, especially if they aren't falling. Against the Knicks, they went inside more than they have been in recent games and it worked out very well for them. When they get into the paint, good things happen and playing in back to back games, their legs may not be there for a lot of long jumpers.

Run! - Even though both teams are playing in back to back games, we know that the Nuggets will run and the Celtics also need to run to keep pace with them. The Celtics are much better when they push the ball and run and get easy shots before the defense can set up.

Play 48 Minutes - The Celtics have struggled with playing for the entire 48 minutes in many games this season. They did a good job of this against New York and they led wire to wire in that win. They have to come out strong and avoid the lapses in the middle where they turn the ball over and miss their shots. And then, they have to close the game out strong.

Be Aggressive - The Celtics must be the more aggressive team. They have to fight for loose balls, defend aggressively, be aggressive in driving to the basket, and just play harder than the Nuggets for the entire game.

X-Factors
Home Game, Fatigue, Revenge Factor
The Celtics are once again home and even though they lost their last two games at home, they should get a boost from the home crowd. With both teams playing in back to back games and having to travel, fatigue could become a factor for one or both teams. There is also that revenge factor where the Nuggets would be extra motivated to avenge the earlier 1 point loss at the hands of the Celtics.

David Jones
David Jones has officiated 1,494 regular season games and 67 playoff games throughout his 25 seasons as an NBA official. In addition, Jones officiated both the men’s and women’s 2000 Olympic Bronze Medal Games. Jones has eight years of collegiate officiating experience in the Southeastern, Trans-American Athletic, Metro and Sunshine State Conferences. In the past, he has been pretty good in calling the games. The Celtics are 1-2 this season and 5-5 in their last 10 games while the Nuggets are 2-1 this season and 6-4 in their last 10 with Jones. He is a homer ref with a home W/L record so far this season of 23-13.

Nick Buchert
Nick Buchert enters his fifth NBA season having officiated 219 games. Buchert owns nine years of collegiate officiating experience. Additionally, he has officiated the 2010 NBA D-League Finals and 2010 NBA D-League All-Star Game. There's not much controversy about Buchert and he has been decent in his games with the Celtics. The Celtics are 2-0 this season and 6-4 in their last 10 games with Buchert while the Nuggets are 2-1 this season and 4-6 in their last 10. His home W/L record is 18-20.

Kogut has called games that favored the Celtics and some where the Celtics couldn't get a call and some others where they were called evenly. I guess it depends on his mood. The Celtics are 2-3 this season and 3-7 in their last 10 games with Kogut. He called the loss to the Cavs earlier this season where the game was called evenly through 3 quarters and then completely one sided for the Cavs in the 4th quarter. He ignored a push off and elbow below the belt by LeBron on Jeff Green and instead called the foul on Green. Cleveland shot 37 free throws to 23 for the Celtics. The Nuggets are 1-0 this season are 6-4 in their last 10 games with Kogut. His home W/L record is 16-16.