The Celtics host the Sixers looking for their 3rd victory over their divisional foe this season.

The Sixers are ahead of the last place Knicks by half a game and they have been playing better recently. They have won 3 of their last 5 games and have won 3 straight at home. However, they have lost their last 7 games on the road.

The Celtics schedule is in a difficult stretch. They are coming off of a back to back set on Tuesday and Wednesday and are playing in back to back games once again this weekend. After the game they will face the 27-22 Milwaukee Bucks on the road. Playing in the 3rd game in 4 nights, fatigue may become a factor.

The Sixers can get a boost tonight from the addition of Tim Frazier. Frazier played with the Celtics in the pre-season and in training camp. He was the final cut before the season began. Frazier has been averaging 15.9 points, 6.8 rebounds, and 8.9 assists for the Maine Red Claws. He signed a 10 day contract with the Sixers and is expected to be available for this game.


Frazier's addition will shore up a depleted Sixers team who have Joel Embiid (back), Jason Richardson (knee), Tony Wroten (knee), and Andrei Kirilenko (suspended) all out. The Celtics are still missing Kelly Olynyk and Shavlik Randolph, who has yet to play a minute for the Celtics. Tayshaun Prince remains a game time decision. Avery Bradley and Evan Turner are expected to play through their hand injuries. Phil Pressey and Andre Dawson played last night in the D-League and may or may not be back with the team for this game. 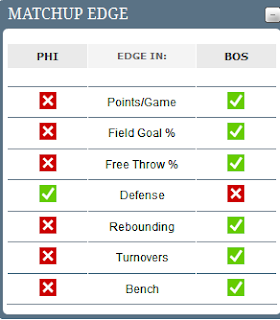 Avery Bradley vs Michael Carter-Williams
Williams is the Sixers leading scorer at 15 points per game. He also is averaging 6.2 rebounds, 7.4 assists, and 1.46 steals. Bradley will need to slow him down as well as make him work on the defensive end.

Jared Sullinger vs Nerlens Noel
Assuming that Sully makes it to the shoot around on time, he will probably start against Noel who is averaging 8.1 points, 7.2 rebounds, and 1.72 blocks per game. Noel has a height advantage on Sully, but Sully has a bulk advantage on Noel. Should be an interesting matchup to watch.

Keys to the Game
Defense - Defense is key to winning. Defense wins games pure and simple. The Celtics have struggled on the defensive end but in the last couple of games, they have picked up the defensive intensity. They have to continue to play tough team defense in this game.

Rebound - The Celtics have to crash the boards in order to give themselves extra possessions as well as to prevent the Sixers from getting second chance points and fast breaks.

Pace and Space - The Celtics must set the pace and run on every possession from start to finish. They need to get off to a fast start and then continue to run and keep the pace up throughout the game.

Go to the Hoops - The Celtics need to take the ball to the hoop and not settle for outside shots, especially if those shots aren't falling. Sully especially is more effective when he plays more in the paint.

X-Factors
Home and Focus
The Celtics are at home once again and should get a boost from the home crowd. They can't afford to lose focus and take the Sixers for granted because they have been playing better recently and the Sixers could surprise the Celtics if they take them too lightly.

Marc Davis
Marc Davis has been an NBA official for the past 16 seasons, working 977 regular season games, 55 Playoff games, and the 2007 NBA All-Star Game. Davis has officiated four Finals games during his career. In addition to his NBA experience, Davis has three years of CBA officiating experience and three years of collegiate basketball officiating experience in the OVC and TAAC Junior Colleges. He grew up in Chicago and is still active in the Chicago area.

Davis was investigated for threatening to whoop Allen Iverson's a** when AI complained about a call in a game in 2005, but was not suspended for it. The Celtics history with Davis goes way back also. In 2009, Davis was seen after a Celtics/Bulls game with his family all decked out in Bulls gear. Can a Bulls fan honestly call a Celtics game without any bias, especially one against the Bulls?

In a win against the Hawks three seasons ago with Davis, the officiating was terrible. The Hawks shot 23 free throws to 13 for the Celtics. KG fouled out in that game on a terrible call. They were holding his jersey and had an elbow in his back and they called the foul on KG. Greg Stiemsma fouled out shortly after on two more terrible calls. In the 4th quarter, 12 fouls were called on the Celtics and only 4 on the Hawks. In OT, 4 fouls were called on the Celtics while none were called on the Hawks, even through there were several very obvious fouls committed. Donny Marshall usually doesn't comment on the officiating but said that the Celtics needed to send the tape of that game to the league because Davis made it all about him. Davis also called Game 1 of the Hawks playoff series three seasons ago. There were missed and bad calls the entire game. At one point, the ref at half court called an obvious foul on the Hawks when Davis, right next to the play, failed to call it. The frustration over the lack of calls boiled over and resulted in Rondo bumping Davis and being ejected and suspended.

In a game two seasons ago against the Bulls, the officiating was terrible. With 12 seconds left, Pierce was trapped and fouled, including a busted lip, right in front of Davis with no call. Rondo was signalling for a time out right in Davis' face but they called a jump ball instead of calling the foul or the time out. Even Hubie Brown was talking about how bad the calls were the entire game and Hubie doesn't usually comment on the officiating. Last season, in a game against the Kings, Davis even got to the mild mannered Brad Stevens. Davis ignored obvious pushing and shoving by DeMarcus Cousins all night. At one point, Gerald Wallace pointed out an obvious foul by Cousins and was tossed to which Stevens pointed out that he could have thrown out Cousins all game and was tossed as well.

Tony Brown
Tony Brown has officiated 716 regular season games and five- Playoff games in his first 12 seasons as an NBA official. Prior to joining the NBA, he officiated for four seasons in the NBA D-League and CBA and three seasons in the WNBA. During that time he worked the 2002 Finals, the 2002 WNBA All-Star Game and the 2001 CBA Finals. As with most refs, Brown has been good and bad in past games with the Celtics. In some the officiating is one sided and in others very good. The Celtics are 1-0 this season and they are 4-6 in their last 10 games with him as a ref. The Sixers are 0-3 this season and 1-9 in their last 10 games with Brown. His home W/L record this season is 17-18.

Lane isn't one of Tommy's favorite refs. Two seasons ago vs the Cavs, Lane got under Tommy's skin a bit and after 3 bad calls in a row, Tommy said "This guy doesn't have a clue. His name's Lane. They should show him the highway." In a win over the Bulls, the officiating was terrible and Lane once again got under Tommy's skin after 3 terrible calls in a row. Then to top it off, with 6.2 seconds left, he made another bad call that fouled Avery out, prompting Tommy to yell" I don't recall a game when there was such a plethora of terrible calls throughout." The Celtics are 0-2 this season and 3-7 in their last 10 games with Lane while the Sixers are 1-1 this season and 3-7 in their last 10. Lane's home W/L record is 20-13.