Celtics look for their first 4 game win streak of the season as they visit the Milwaukee Bucks.

Share All sharing options for: Celtics back (to back) on the road as they visit the Bucks

Both teams are playing in back to back games and both teams had to travel after their Friday night games. The Celtics are coming off a win at home over the Sixers while the Bucks are coming off a tough loss on the road to the Rockets. The Bucks had won 5 straight before Friday night's loss. They have won their last 3 games at home.

The Bucks are short handed with 4 players out and 2 more questionable. Even with all the injuries, the Bucks are dangerous and the Celtics can not take them lightly. The Celtics are still missing Kelly Olynyk and Shavlik Randolph. Tayshaun Prince traveled with the team and will be a game time decision. Both Avery Bradley and Evan Turner have been playing through hand injuries. 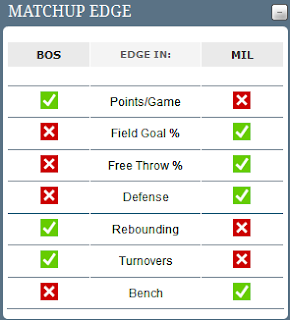 Marcus Smart vs Brandon Knight
Knight is the Bucks leading scroer with 17.9 points per game along with 4.2 rebounds and 5.3 assists. Smart needs to slow him down to keep the Bucks from getting into their sets quickly and to keep him from having a big game.

Evan Turner vs Giannis Antetokounmpo
The Greek Freak, as Antetokounmpo is called, has been playing very well and will be a challenge for Evan Turner. He is coming off a big game against Houston with 27 points, 14 rebounds, and 4 assists. It will be crucial to slow him down.

Attack the Paint - At times the Celtics love the jumper and 3 point shots a bit too much. When they fall, it's great. But, when they don't fall, it can get ugly. The Celtics are playing in their 4th game in 5 nights and may not have the legs for jumpers at the end. If they aren't falling, they need to get into the paint and drive to the hoop.

Be Aggressive - The Celtics were too passive at times in the second half against the Sixers, allowing them to come back to with three points. They need to be aggressive on defense, in going after loose balls and rebounds, and in driving to the hoop. They have to be the team that plays harder and wants the win more.

Defense - Defense is always the key to winning. The Celtics have got to concentrate on getting stops and on defending the Bucks in the paint as well as on the perimeter.

He was lead official in the Nets game that resulted in a brawl the season before last. Capers gave Doc a T for yelling to Rondo. They let the Nets get away with pushing and shoving and hard fouls the entire first half. The Nets shot 17 free throws to 5 for the Celtics in the first half and 3 of those free throws were on technicals. They did better in the second half after the brawl, but the refs' failure to call the game evenly in the first half led to the fight. This season, he called the Golden State game and made a terrible call to end the first half on a last second heave. Even the Warriors fans thought it was a terrible call. The calls all went the Warriors way down the stretch and Warriors fans couldn't believe how they were getting the benefit of all the questionable calls. The Celtics are 0-4 this season and 2-8 in their last 10 games with Capers. The Bucks are 2-2 this season and 4-6 in their last 10 with Capers. His home W/L record this season is 22-17.

JT Orr
J.T. Orr enters his fourth NBA season having officiated 162 regular season games. Orr’s experience includes five seasons and 177 games officiated in the NBA D-League. He also has four seasons of NBA preseason experience and has worked in NBA summer camps for nine years. In addition to his professional experience, Orr officiated collegiate games for 13 years, working the NCAA tournament in 2011 and including service for the PAC 10/12, West Coast and Big West Conferences and multiple small college conferences. He also has 15 years of high school officiating experience.
The Celtics are 1-1 this season and 4-6 over their last 10 games with Orr as a ref. As with most refs, he can be good or bad. He has called a few one sided games where the Celtics can't get a call and others where the officiating is even. The Bucks are 1-2 this season and 4-6 in their last 10 games with Orr. His home W/L record this season is 20-15.

Kevin Scott
Kevin Scott enters his fourth NBA season having officiated 154 regular season games. Scott’s experience includes four seasons and 138 games officiated in the NBA D-League where he officiated the playoffs in 2009, 2010, and 2011 and was selected to work the NBA D-League Finals in 2011. Scott’s collegiate experience includes four years in the Southeastern Conference, 10 years in the Atlantic Sun Conference, six years in the Southern Conference, and seven years in the Big South Conference. Scott has also been mostly good in the games he has called for the Celtics. The Celtics are 0-3 this season and 2-8 over their last 10 games with Scott while the Bucks are 1-3 this season and 4-6 in their last 10. His home W/L record this season is 22-15.