The Celtics return from their 2-1 road trip to host former Celtics Jeff Green, Tony Allen and Courtney Lee with the Memphis Grizzlies.

Share All sharing options for: Celtics return home to host the Memphis Grizzlies


The Celtics host the Memphis Grizzlies for the second and final meeting between these two teams. The Grizzlies won the first game in Memphis 117-100, in spite of being short handed. They are at full strength for this one and will be a tough matchup for the Celtics with the size that they have in their front line.

The Grizzlies have 3 former Celtics who play prominent roles on their team. Jeff Green and Courtney Lee are listed as starters and Tony Allen is key off the bench. The Grizzlies are 19-7 since they made the trade for Jeff Green. Green won his first 8 starts with the Grizzlies.

The Grizzlies are at full strength without any injuries to report as of now. The Celtics are far from full strength. They will definitely miss Jared Sullinger against the Grizzlies big front court of Randolph and Gasol. Avery Bradley may be back for this game and the Celtics certainly can use him. Their biggest concern will be if Isaiah Thomas can't play after hitting the floor hard in the Celtics win over the Heat. He is listed as a game time decision.

Brandon Bass vs Zach Randolph
Brandon Bass has been playing some of his best basketball in recent games and he will need a big game in this one on both ends of the court. Randolph is averaging 16.4 points and 11.4 rebounds per game. Bass will have his hands full trying to slow Randolph down.

Tyler Zeller vs Marc Gasol
The other half of the Grizzlies starting front court is averaging 18.1 points, 7.9 rebounds and 1.7 blocks. He is one of the top centers in the league and stopping both Randolph and Gasol will be key for the Celtics.

Honorable Mention
Marcus Smart vs Mike Conley
Conley is averaging 16.2 points, 3.2 rebounds , and 5.4 assists. Smart will need to use his size and defense to try to slow Conley down and keep him from getting the Grizzlies into their sets quickly. 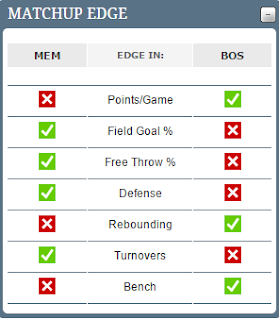 Keys to the Game
Defense - Defense is always key to getting a win. The Celtics must defend especially in the paint where the Grizzlies can be very dangerous. The Grizzlies are 33-2 when they shoot a higher percentage than their opponents. It will be crucial for the Celtics to play tough team defense in this game.

Play 48 Minutes - The Celtics can't just play hard half the game. They have to play hard for the entire game. They also can't let up down the stretch and have to focus especially at the end of the game when a veteran team like the Grizzlies can be very tough.

Rebound - Crashing the boards won't be all that easy with Randolph and Gasol crowding the paint. But the Celtics must put out extra effort to grab as many rebounds as they can because they have to get the ball in order to score and they must keep the Grizzlies from scoring easy second chance points.

Run, Run Run! - The Celtics need to run on every possession and try to get some easy baskets before the Grizzlies' tough defense gets set up.

Be Aggressive - Against a very tough Grizzlies team, the Celtics can't afford to be passive. They have to be aggressive on defense, in going after loose balls, in going to the hoop, and in grabbing rebounds. They have to be the team that wants it more.

X-Factors
Injuries, The Return, and Bench Play
If Isaiah Thomas can't play, or is limited by his sore back, the Celtics will definitely be at a disadvantage. On the other hand, if they get Avery Bradley back, that would be a good thing.


The Grizzlies have 3 former Celtics returning to the Garden, with Green returning for the first time since his trade. For some odd reason, traded players seem to find some deep down motivation to have career games against their former teams, whether or not the parting was on good terms or not. This could become a factor in this one as the 3 band together to stick it to their former team.
The Celtics bench will need to produce for the Celtics to win. Hopefully they will continue to get good production from Luigi, Jonas, Isaiah, Jae, and Kelly. In the first meeting between these two teams, Grizzlies reserve Jon Leuer scored a season high 19.7 points to go with 7 rebounds, 4 assists and 2 steals. Also, Tony Allen is always dangerous playing against the Celtics.

In his last game with the Celtics against the Cavs, the refs called the game fairly even for 3 quarters and then very one sided for the Cavs in the 4th quarter with the final free throw disparity 37-23 in favor of the Cavs. There were several obvious bad calls against the Celtics that even Cavs fans questioned. The Celtics are 1-5 this season and 3-7 in their last 10 games with Spooner while the Grizzlies are 1-1 this season and 5-5 in their last 10. His home team W/L record this season is 21-25 so he's not easily influenced by the home crowd.

Derek Richardson
Derek Richardson has officiated 995 regular season games and one playoff game, as well as the 2003 NBA Rookie Game in Atlanta, during his 17 seasons as an NBA official. Prior to joining the NBA, Richardson spent eight years officiating in the CBA, including the 1996 CBA All-Star game and two games of the 1996 CBA Finals. Richardson is known for being inconsistent with his calls, especially on charge/block calls. In the game this season against the Lakers, the officiating was terrible. The calls went the Lakers way throughout the game. They ejected Thomas on a bogus call. Smart and Zeller both fouled out. LA shot 38 free throws to 27 for the Celtics. Even the Lakers fans were complaining because the refs were ruining their tanking effort. The Celtics are 0-4 this season and 4-6 over their last 10 games with Richardson. The Grizzlies are 4-0 this season and 8-2 over their last 10 games with Richardson as a ref. His home W/L record this season is 23-20.