Celtics go for 6th straight win as they visit the Thunder

The Celtics playoff push continues tonight as they visit the Oklahoma City Thunder.

Share All sharing options for: Celtics go for 6th straight win as they visit the Thunder

The Celtics bring their 5 game win streak on the road for a visit to the Oklahoma City Thunder. Both teams are fighting to make the playoffs, both had a roster overhaul at the trade deadline and both are dealing with injuries. Both teams currently sit in the 9th spot due to tie breakers. The Celtics are in a 3 way tie with Indiana and Miami for the 7th and 8th in the East while OKC is in a two way tie with New Orleans for the 8th spot in the West. Indiana and Miami are both playing tonight while the Pelicans are off.

The Thunder have been missing Kevin Durant, who has been out much of the season with foot injuries. He has been able to begin practice once again and there is a slight chance he may return Wednesday, but hopefully they will be cautious with him and give him another game to rest. Serge Ibaka has missed the past 3 games and will be out 4-6 weeks after having surgery on his knee. The Celtics are still without their spark plug Isaiah Thomas and Jared Sullinger will miss the rest of the season.

This is the second and final game between these two teams. The Thunder won the first meeting in Boston 109-94. Both Russell Westbrook and Kevin Durant missed that game. The Celtics starting line up included Rajon Rondo, Jeff Green and Jared Sullinger, and Kendrick Perkins was coming off the bench for the Thunder. 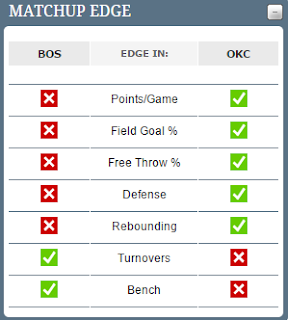 Marcus Smart vs Russell Westbrook
Russell Westbrook has been a one man wrecking crew since the All Star break. With Durant out, he is taking on more of the load for OKC. Since the break, he is averaging 32.5 points, 10.8 assists and 10.0 rebounds. It will be up to both Smart and Bradley to some how slow him down.

Brandon Bass vs Enes Kanter
Although new to the Thunder since the trade deadline, Kanter is playing very well. He is averaging 14.3 points and 8.3 rebounds for the season. As he has gotten used to OKC's system, he has been putting up some big numbers, particularly in his last two games. Against Dallas, he had 19 points and 13 rebounds and against Chicago he had 18 points and 18 rebounds.

Keys to the Game
Rebound - The Thunder lead the league in rebounding with 47.7 per game. Their big front line of Kanter and Adams make it difficult for opposing teams to grab rebounds. The Celtics will need to put extra effort into crashing the boards as a team. Much of rebounding is effort and desire and they have to show both if they hope to have a chance in this game.

Defense - Defense is always a key to winning. The Celtics will need to defend the perimeter as well as the inside because they have players who can score both inside and out. The Celtics have been playing good defense and they will need to continue that in this game. If the Thunder have one weakness, it may be turning the ball over. They have allowed 57 points off of turnovers in their last 2 games. The Celtics need to be active on defense and try to force turnovers.

Pace and Space - The Celtics need to set the pace and continue to run and to move the ball. When they slow down, they aren't near as effective as when they are running on every possession. They also can't play hero ball. They are best as a team, moving the ball, finding the open man and sharing the scoring.

X-Factors
Focus on the Road and Effort
The Celtics need to keep their focus and not let the distractions on the road derail them. They have to play with the same effort that they have in their 5 game win streak. They can't let the absence of Durant and Ibaka make them relax. If they can keep their focus and bring the effort, they have a good chance of winning.

Michael Smith
A winner of the Vanguard Club Achievement Award in recognition of outstanding accomplishments in the field of sports, Michael Smith has officiated 1,237 regular season and 30 playoff games, as well as the 1997 Schick Rookie Game, the 2000 Mexico Challenge and the 2003 NBA Europe Games.

The Celtics are 1-0 this season and 5-5 over their last 10 games with Smith on the court. Smith called a game last season against the Hawks in which the Celtics took 31 free throws to 12 for the Hawks and the Celtics got the benefit of several questionable calls. The first 3 games last season were evenly officiated. The last one against Cleveland was terrible. Tommy described it this way: "I don't recall a game when there was such a plethora of terrible calls throughout." The Cavs shot 26 free throws to 22 for the Celtics and the bad calls went both ways. He can be very good or very bad, depending on the night. The Thunder are 2-1 this season and 6-4 over their last 10 games with Smith. Smith was one of the referees Mark Cuban received a $75,000 fine for criticizing as being unprofessional and biased in a Mavs game against OKC last season. His home W/L record is 22-25.

Bennie Adams
A former math instructor at Southern University, Bennie Adams joined the NBA officiating staff 20 seasons ago, and since then has officiated 1,110 regular season and nine Playoff games. In addition, he has been a USA Basketball official since 1995. Adams has also officiated the 2008 NBA Europe Live Tour and the
2002 NBA All-Star Rookie Challenge. Adams officiated in the CBA for three years, and worked the 1996 CBA Finals. He also has three years of collegiate officiating experience in the Southeastern, Ohio Valley, Trans America Athletic
and Southwestern Athletic Conferences. Adams also has 10 years of high school officiating experience in Louisiana.
Adams has both a Masters and Bachelors degree in mathematics from Southern University.

Adams tends to be inconsistent especially on charge/block calls. He is on Tommy Heinsohn's naughty list (along with a lot of others). In one game, Tommy went ballistic yelling at the top of his lungs "GO BACK TO YOUR MOMMA BENNIE ADAMS!!!" However, he hasn't been particularly bad in recent games with the Celtics. The Celtics are 2-0 this season and 6-4 in their last 10 games with Adams while the Thunder are 2-3 this season and 7-3 in their last 10. His home W/L record this season is 22-28.

Curtis Blair
Curtis Blair is entering his eigtht NBA season having officiated 322 regular season games. Blair has six seasons of NBA D-League experience and worked the 2008 NBA D-League Finals. He also officiated in several college conferences, including the Atlantic 10, Atlantic Coast Conference and the CAA. He was drafted by the Houston Rockets in 1992 and played professionally in Australia, Austria and Turkey. Like most refs, Blair has been good and bad in previous Celtics games. In a Clippers game last season, he ignored fouls by the Clippers and called phantom fouls on the Celtics all game. Tommy made the comment that the Celtics had no shot to win after the officiating took over. The Celtics are 3-3 this season and 3-7 in their last 10 games with Blair while the Thunder are 3-0 this season and 9-1 in their last 10. His home W/L record is 25-25.