The Celtics visit the last place Knicks for the 4th and final game this season.as they look to continue their playoff push.

Share All sharing options for: Celtics visit last place Knicks as they look to get back on track


The Celtics and Knicks meet for the 4th and final time this season. The Celtics lead the series 2-1. The Knicks won the first meeting in Boston on December 12, 101-95. The Celtics won the next two games - 108-97 at MSG and 115-94 in Boston. In the last game on February 25, the Celtics fell behind by 22 points in the second half before outscoring the Knicks 24-11 in the final 12 minutes to pull out the win. Jonas Jerebko led 6 Celtics in double figures with 20 points and 5 rebounds and Evan Turner recorded his first triple double. Andrea Bargnani led the Knicks with 17 points and Jason Smith added 14 points and 10 rebounds.

The Celtics alone in the 8th seed, in spite of losing 4 of their last 5 games. They are just 1/2 game ahead of Brooklyn and Charlotte and Indiana, all of whom are for the 9th seed. The Pacers were tied with the Celtics for 8th, but they lost to the Bucks in the only Thursday game. The Celtics are 2 games behind the Heat, who are in the 7th spot by virtue of their win over the Celtics in the last game. Charlotte is playing at Washington, Miami is at Atlanta, and Brooklyn is hosting Cleveland. 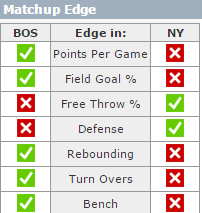 Avery Bradley vs Langston Galloway
Galloway is playing about as well as any Knicks player is these days. He is averaging 11.3 points, 4.3 rebounds, and 3.2 assists. I expect Avery to play tough defense and limit Galloway's effectiveness.

Tyler Zeller vs Andrea Bargnani
Bargnani is the Knicks leading scorer and is capable of having a big game on offense. He is averaging 14.2 points, 4.0 rebounds and 1.6 assists. He is capable of hitting from outside as well as getting to the basket and Tyler will need to defend him for both.

Keys to the Game
Defense - Playing tough team defense is the key to winning every game. The Celtics need to concentrate on getting stops and keeping the Knicks' offense off balance. Against the Heat, the Celtics played little to no defense in the first 3 quarters. When they finally did clamp down on defense in the 4th quarter, it was too late. The Celtics need to play tough team defense from start to finish in this one.

Set the Pace - The Celtics need to run on every possession. It seems that when they run they build leads and outplay other teams. When they slow it down, they fall behind and lose leads. They have to run and set the pace of the game.

Be Aggressive - The Celtics needs to be the more aggressive team. They have to be more aggressive in going after loose balls, in grabbing rebounds, in defending, and in going to the basket. They lacked aggression against the Heat for the first 3 quarters and lost the game because of it.

Start Strong - The Celtics have been outscored in the first quarter of their last 5 games. They have to come out with purpose and with an attitude and play strong right from the start rather than falling behind because of a lazy start and have to play catch up the rest of the way.

X-Factors
Effort and Focus
The Celtics lacked effort against the Heat and were embarrassed by a depleted Heat team that they should have beat. Hopefully they learned their lesson and will give a better effort in this one. If they don't, Brad Stevens should pull them immediately instead of letting them dig a deep hole. They need to focus and take good shots and hit them. They need to focus on hitting their free throws and on executing the team game plan. They are facing another depleted team that they should beat and if they don't have effort and focus, even the lowly Knicks can pull off an upset.

Sean Wright
Sean Wright has officiated 532 regular season and 12 playoff games in his nine seasons. Prior to joining the NBA, Wright was an official in the NBA D-League, where he participated in the Playoffs in 2004 and the Finals game in 2005. Wright’s collegiate officiating experience includes working in the SEC, Colonial, Big South,
Southern, Ohio Valley, Atlantic Sun and Southwestern Athletic Conferences. It was Sean Wright that Rondo threw the ball at resulting in his ejection and suspension in 2012. In one game with Wright last season, a loss to Philly, Tommy called him an idiot after one particularly bad call. The Celtics are 1-3 this season and 2-8 in their last 10 games with Wright while the Knicks are 0-4 this season and 2-8 in their last 10. His home W/L record this season is 33-21.

Tre Maddox
Tre Maddox enters his fourth NBA season having officiated 152 regular season games. Maddox’s experience includes four seasons and 158 games officiated in the D-League. He also has five seasons of NBA preseason game experienece and worked in NBA summer camps for five years.
In addition to his professional experience, Maddox officiated collegiate games for six years in the PAC 10, West Coast and Pac West Conferences and has eight years of high school officiating experience. The Celtics are 2-3 this season and 6-4 in their last 10 games with Maddox as a ref. He has been a decent ref for most of those. but in their last game vs the Hawks, that the Celtics won, there were quite a few terrible calls down the stretch. They ignored obvious fouls by the Hawks and called ticky tack fouls and phantom fouls on the Celtics. Ken Mauer was the head official and made the majority of the bad calls, but Maddox was part of the crew. The Knicks are 2-1 this season and 2-3 over Maddox's. His home W/L record this season is 30-21.

After leaving the Navy, Richardson decided to pursue officiating full time. Since joining the NBA staff, he has officiated 1,106 regular season games and four playoff games over the past 19 seasons, and was a member of the crews that officiated the 2000 Schick Rookie Game, 2000 NBA All-Star Saturday and the 2003 Japan Games. Richardson has three years of CBA officiating experience as well as 10 years of Pro-Am officiating experience, including the 1992 Pro-Am Nationals. He also has three years of collegiate officiating experience in the Big East, Southeastern and Ohio Valley Conferences. Richardson spent eight years officiating in Virginia high schools, where he worked the VHSL State Tournament. The Celtics are 2-2 this season and 3-7 in their last 10 games with Richardson while the Knicks are 1-2 this season and 4-6 in their last 10. His home W/L record is 34-22.