The Celtics will try for their first win over Doc Rivers' Clippers as they host them in an early Sunday game.


Doc Rivers and the Clippers complete a 3 game road trip with a visit to the Celtics. This is the second and final meeting between these two teams this season. The Celtics lost the first game in LA 93-102 back in January. The Clippers have beaten the Knicks and Sixers in their first two games on the trip.

The Celtics are hot in the playoff race and every game is a must win if they want to remain in the playoffs. The Nets, who are coming off a win over the Cavs and who are just 1/2 game behind the Celtics host the Lakers. The Nets are likely to win that one and if the Celtics lose, they will drop to 9th, with the Nets moving into 8th. Indiana is hosting Dallas and Miami is hosting Detroit and both teams may very well win as well.

The Clippers, on the other hand, have clinched their playoff spot in the West. They are the 5th seed and can not move up any since the top 4 spots are occupied by the division leaders. Golden State leads the Clippers by 11.5 games in the Pacific division and so the Clippers won't be moving into the top 5. The Spurs are 1.5 games behind the Clippers in the 6th spot and so the Clippers should be motivated to keep winning so as to keep home court in their opening round.

The Clippers are without former 6th man of the year, Jamal Crawford with a calf injury, but other than that, they are at full strength. The Celtics are missing Jared Sullinger who remains out with the foot injury. They were happy to see Isaiah Thomas approaching his former self against the Knicks and he will be needed in this one.

The Celtics should be triple motivated in this one. First, they get to beat the former coach that ditched them for another team. Second, they get to stay in 8th in the playoff chase. And third, they improve the pick that they will get from the Clippers in this year's draft. Go Celtics! Beat LA!!! 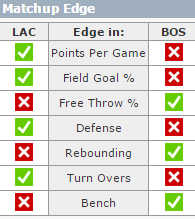 Brandon Bass vs Blake Griffin
Blake Griffin can be a one man wrecking crew if the Celtics don't play tough defense and slow him down. He is averaging 21.8 points, 7.6 rebounds, and 5.2 assists. In the first meeting between these teams, Griffin had 22 points, 9 rebounds and 6 assists. The Celtics must find a way to limit his production.

Tyler Zeller vs DeAndre Jordan
Jordan is one of those old style centers who can do a lot of damage around the basket on both ends of the court. He is averaging 11.3 points, 14.8 rebounds, and 2.2 blocks. In the first game, Jordan finished with 19 points, 12 rebounds and 6 blocks. The Celtics have got to find a way to keep him from getting comfortable in the paint.

Honorable Mention
Marcus Smart vs Chris Paul
Paul is one of the best point guards in the game today. He is averaging 18.8 points, 4.6 rebounds, 10.1 assists and 1.9 steals per game. He will definitely present a challenge to the Celtics back court along with JJ Redick. If ever a strong defensive effort was needed by both Smart and Bradley, it is in this game.

Brad Stevens vs Doc Rivers
The new coach vs the previous coach. Doc won the first three meetings with his former team. Can Brad get the upper hand in this one?

Keys to the Game
Energy and Effort - The Celtics have to come out with energy and have to play harder than the Clippers. Anything less than 100% effort from every Celtic will be needed to get a win in this one. They are capable of playing well enough to beat the Clippers, but they can't come out with less than their best. If they play like they did against the Heat or even the Knicks, they will get blown out.

Defense - The Clippers are a high scoring team, averaging 106.4 points per game, good for 2nd in the league. The Celtics have played excellent defense in spurts but to slow down the Clippers, they have to play tough team defense from start to finish. They can't allow the Clippers to get easy baskets.

Rebound - The Celtics can't score if they don't have the ball. Rebounding will be tough against the Clippers big front line, but much of rebounding is effort and desire and so the Celtics must put out the extra effort on the boards to give themselves extra possessions as well as to limit the Clippers fast break opportunities and second chance points. The Clippers will easily turn rebounds into points. If the Celtics can defend well and force the Clippers to miss shots, they will have a good shot at getting the rebounds if Doc still has his team head back on defense as soon as the shot goes up.

Set the Pace - The Celtics have got to run up the court on every opportunity and not walk it up. They also have to keep the ball moving and not over dribble. They have to make the extra pass to find the open man but also make smart passes and not turn the ball over.

Play 48 Minutes - The Celtics seem to play very well at times, sometimes starting off strong and sometimes finishing strong. But then at other times, they seem to fade away and can't seem to do anything right. They have to make an effort to play hard and keep their focus from the starting tip until the final buzzer. They have to keep their focus and make their shots and keep the ball moving.

X-Factors
Focus and Home
The Celtics must be focused on this game and keep their focus on the game. They tend to lose focus at times and miss free throws and open shots. They have to stay focused if they want to win this game and stay in the playoff race. They are playing at home and so they should get a boost from the home crowd as well as from the fact that the Clippers may be a bit road weary at the end of a road trip.

Derrick Stafford
Over his 26 NBA seasons, Derrick Stafford has worked 1,534 regular season, 123 playoff, and seven Finals games. He was a member of the crews that officiated the 1992 Legends All-Star Game in Orlando, the 1997 McDonald’s Championship in Paris and the 2002 NBA All-Star Game. The 24-year NBA officiating veteran has also served twice on the Executive Board of the National Basketball Referee Association. Stafford has six years of CBA officiating experience, and he officiated Pro-Am basketball for six years. He also has seven years of collegiate officiating and 10 years of high school officiating experience in Georgia where he worked the state finals. While at Morehouse College he played football for two years and baseball for four. Stafford made All Conference three years in baseball and led the confereence in hitting in 1978. He was also co-most valuable player in baseball with NFL referee Jerome Boger in 1976. Stafford is the founder and president of his own foundation, "Don’t Foul Out, Inc.".

The Celtics are 0-3 this season and 4-6 over the last 10 games with Stafford on the court. In one win over the Magic last season, the Celtics took 14 free throws to 9 for the Magic and the refs let them play on both sides. The officiating in the game against the Cavs this season was one skewed slightly to the Cavs, but again, they let them play with the Celtics shooting 13 free throws to 14 for the Cavs. Two seasons ago, in a loss to the Lakers, the officiating was terrible and the Celtics shot just 5 (yes, that's FIVE) free throws to 20 for the Lakers so he can be good and he can be bad depending on the game. The Clippers are 3-1 this season and 5-5 over their last 10 games with Stafford. His home W/L record this season is 31-22.

Wall was the ref that called the clothesline on Barbosa by Bogans in the Nets game 2 seasons ago just a regular foul. Wall also officiated the Cavs game this season where they called it evenly through 3 quarters and then they gave the game to the Cavs in the 4th quarter. Wall also officiated the last Warriors game along with Matt Boland where all the calls down the stretch went the Warriors way. The Celtics are 2-3 this season and 2-8 in their last 10 games with Wall while the Clippers are 2-1 this season 8-2 in their last 10. His home W/L record is 29-23.

You would think that being a former player, Wood would try to be fair but he has been a fairly mediocre ref at best. Although he's been pretty good for the most part in Celtics games he has officiated, one terrible one this season stands out. Against the Magic, the Celtics were mugged all night with no calls. The Magic go the benefit of ticky tack calls. The game ended with 28 free throws for the Magic and 20 for the Celtics, but 6 of those free throws were the result of intentional fouls by the Magic down the stretch. The Celtics are 3-1 this season and 6-4 over their last 10 games with Wood officiating. The Clippers are 2-2 this season and 6-4 in their last 10 games with Wood. His home W/L record this season is 29-19.