Celtics visit Hornets in a must win game for playoff chances

The Celtics continue their stretch of must win games with a stop in Charlotte to play the Hornets, who are just half a game behind them in the standings.

Share All sharing options for: Celtics visit Hornets in a must win game for playoff chances

The Celtics travel to Charlotte for their 4th and final game with the Hornets. The Hornets won the first two meetings, one in Charlotte 96-87, and one in Boston 104-95. The Celtics came from behind to win the last meeting in Boston 106-98. Isaiah Thomas led the Celtics with 28 points while Jonas Jerebko pitched in 16 points and 10 rebounds. The Hornets were led by Mow Williams with 31 points, 7 rebounds, and 4 assists. Michael Kidd-Gilchrist added 12 points and 11 rebounds. Al Jefferson and Gerald Henderson added 14 each.

The Celtics are launching into a 5 games in 7 nights stretch, all of which are very important. To say that this game is a must win is an understatement. With the loss to the Clippers and wins by Miami, Brooklyn and Indiana, the Celtics took a big step back in their playoff chase. Brooklyn has now taken over the 8th spot, dropping the Celtics back to 9th, tied with Indiana and Charlotte just 1/2 game behind them. A loss in this one would be devastating to the Celtics playoff hopes.

Charlotte snapped a 3 game losing streak when they beat the Hawks on Saturday. This might be more impressive if the Hawks weren't sitting ALL 5 starters. The Celtics have won their last 2 road games while losing 3 in a row at home. The Celtics are 14-22 on the road while the Hornets are 17-19 at home.

The Hornets might be without two of their regular starters. Michael Kidd-Gilchrist (ankle) and Cody Zeller (shoulder) are both listed as questionable for this game. Jared Sullinger remains out for this game for the Celtics. Isaiah Thomas fell a couple of times in Sunday's game and he was slow to get up so hopefully he will be able to play and be effective in this game. 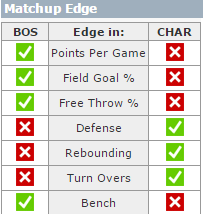 Marcus Smart vs Kemba Walker
Walker was out in the last meeting between these teams and so this will be Smart's first game starting against him. Walker is averaging 17.8 points, 3.6 rebounds, 5.1 assists, and 1.5 steals per game. Smart will need to find his game and play tough defense against Walker and somehow find a way to hit shots once again.

Tyler Zeller vs Al Jefferson
Zeller will need to defend Big Al, who can be a monster on offense. But, Al has never been known for his lock down defense and so Tyler will need to get into the paint and score. Big Al is averaging 17.3 points, 8.6 rebounds, and 1.3 blocks per game.

Honorable Mention
Isaiah Thomas vs Mo Williams
Both players come off their team's bench to bring a spark to the team. Isaiah still seems to be struggling with the sore back that kept him out for 2 weeks. He was slow to get up a couple times when the Clippers hit him hard. The Celtics need him to be back to his pre-injury production. Mo Williams had a big game in the last meeting between these two teams with 31 points, 7 rebounds and 4 assists. The Celtics need to keep him from going off on them again.

Get off to a Strong Start - The Celtics have trailed after the first quarter in their last 6 games. They must get off to a better start and not dig a hole that the bench needs to try to dig out of. The starters have to defend and they have to hit their shots. They have gotten into the habit of spotting the opponents a big lead and they have to stop that if they expect to make the playoffs. Maybe Brad Stevens will elect to start the bench since the starters seem to be floundering at the beginning of games.

Rebound - The Celtics can't run and they can't score if they don't have the ball. They must crash the boards as a team and put out the extra effort it takes to get the rebounds. Charlotte surrenders the fewest offensive rebounds per game at 8.6 per game. Much of rebounding is effort and the Celtics must put out more effort, especially on the boards,than the Hornets if they want to win this game.

Move the Ball but Limit Turnovers - The Celtics must move the ball and find the open man. They struggle to score when the ball stops moving. At the same time, they have to limit turnovers. They give away way too many points by making careless passes and by losing focus. The Hornets turn the ball over just 11 times a game, which is the fewest in the league. The Celtics have to take care of the ball and keep their turnovers low as well.

X-Factors
Focus and Effort
The Celtics should be able to beat the Hornets but they need to stay focused from start to finish. They have to focus on making their shots as they won't win many games shooting less than 40%. And they have to focus on playing as a team and playing tough defense and executing, especially on the road. They can't afford to come out and play at half speed yet again. They must come out and give 100% from start to finish.

He was lead official in the Nets game that resulted in a brawl the season before last. Capers gave Doc a T for yelling to Rondo. They let the Nets get away with pushing and shoving and hard fouls the entire first half. The Nets shot 17 free throws to 5 for the Celtics in the first half and 3 of those free throws were on technicals. They did better in the second half after the brawl, but the refs' failure to call the game evenly in the first half led to the fight. This season, he called the Golden State game and made a terrible call to end the first half on a last second heave. Even the Warriors fans thought it was a terrible call. The calls all went the Warriors way down the stretch and Warriors fans couldn't believe how they were getting the benefit of all the questionable calls. The Celtics are 0-6 this season and 1-9 in their last 10 games with Capers. The Hornets are 3-2 this season and 5-5 in their last 10 with Capers. He is a big homer ref with a home W/L record this season of 36-19.

Tony Brown
Tony Brown has officiated 716 regular season games and five- Playoff games in his first 12 seasons as an NBA official. Prior to joining the NBA, he officiated for four seasons in the NBA D-League and CBA and three seasons in the WNBA. During that time he worked the 2002 Finals, the 2002 WNBA All-Star Game and the 2001 CBA Finals. As with most refs, Brown has been good and bad in past games with the Celtics. In some the officiating is one sided and in others very good. The Celtics are 3-1 this season and they are 4-6 in their last 10 games with him as a ref. The Hornets are 1-4 this season and 2-8 in their last 10 games with Brown. His home W/L record this season is 29-25.

Dedric Taylor
Dedric Taylor is one of three new officials for the 2014-15 season. Taylor joins the staff after four seasons as a referee in the NBA D-League, already having offciated 12 regular season NBA games as a non-staff official. Additionally, Taylor officiated in numerous college conference, including the SEC, Sunbelt, Southern, MEAC, ASUN and Conference USA. The Celtics are 1-2 with Taylor over his career, with 2 games coming against Philadelphia in the preseason. The Hornets are 2-2 with Taylor over his career. His home W/L record this season is 26-21.