The Celtics begin a 3 game road trip with a stop in New Orleans to face the Pelicans.

The Celtics begin a 3 game road trip with a stop in New Orleans to face the Pelicans. This is the second and final meeting between these two teams. Boston won the first game at home 108-100. Jared Sullinger led the Celtics with 27 points and 10 rebounds and Jae Crowder set a new career high with 22 points. Anthony Davis led the Pelicans with 34 points 9 rebounds and 3 blocks and Eric Gordon scored a season high 21 points. Jrue Holiday was injured in that game and has been out ever since.

The Pelicans are looking for their 7th win in their last 8 games. They are fighting for the final spot in the playoffs in the West. They are 1 game behind Oklahoma City for the 8th seed. OKC has been playing very well in spite of battling injuries to their two stars. The Celtics are still in the fight for the final spot in the East and need every game if they are to make up ground on the teams ahead of them.

Avery Bradley injured his elbow in Wednesday's win over the Jazz and didn't make the trip with the team. At this time, Brad Stevens has not announced who will start in his place, but I took a wild guess at James Young. Isaiah Thomas would seem to be the most likely but the bench would suffer without him to lead the second unit. Another thought would be Jae Crowder, but he struggled in the starting lineup and has been flourishing on the bench.


So, I just took a wild guess and put James Young in there, partly wishful thinking and partly because I think it would affect the second unit the least. Or, maybe it will be Li'l Phil Pressey and move Smart to the shooting guard and that way the second unit stays pretty much intact. As Brad Stevens said, all this roster change makes the Celtics pretty hard to scout. 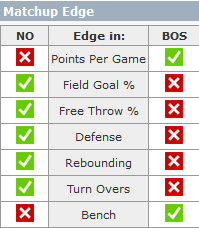 Marcus Smart vs Tyreke Evans
Evans is averaging 16.8 points, 6.5 assists and 5.3 rebounds for the Pelicans this year. He will be a tough matchup for Smart who is celebrating his birthday on Friday. Smart is averaging 7.4 points, 3.5 assists, and 3.1 rebounds. He has only shot 7-30 over his last 3 games. It would be a good time for him to break out of his shooting slump.

Brandon Bass vs Anthony Davis
Davis is averaging 24.2 points, 10.3 rebounds, a league leading 2.8 blocks, and 1.5 steals and is one of the toughest covers in the league. Last season when the Celtics played in New Orleans, Davis lit them up for 40 points along with 21 rebounds. In the first game in Boston, Davis had 34 points, 9 rebounds and 3 blocks. It will take a team effort to slow him down in this one.

Keys to the Game
Focus - The Celtics seem to lose focus at times and then have a flurry of turnovers and ill advised shots. They have to keep their focus and make smart passes avoid getting flustered. They also have to focus on their shots as they have averaged only 88.3 points on 36.5% shooting over their last 3 games. They have to keep their focus and hit their shots.

Be Aggressive - The Celtics have got to be aggressive in going to the basket, playing defense, diving for loose balls and just playing harder. They won't win many games on talent alone so they need to outwork their opponents to get the win.

Pace and Space - The Celtics need to set the pace and run on every possession in order to get easy baskets before the defense sets up. They also need to space the floor and make the extra pass to find the open man.

X-Factors
Focus, Motivation, and Missing AB
The Celtics are on the road once again and young teams tend to lose focus on the road. The Celtics need to keep their focus and block out the distractions. Both teams are fighting to make the playoffs and that motivation should give them more effort and focus. With a win tonight, the Pelicans take over the 8th spot while even with a win, the Celtics are still outside of the top 8 and that could be some pretty strong motivation. Also, how the Celtics fill in for the missing Avery Bradley will be a big factor.

Bennie Adams
A former math instructor at Southern University, Bennie Adams joined the NBA officiating staff 20 seasons ago, and since then has officiated 1,110 regular season and nine Playoff games. In addition, he has been a USA Basketball official since 1995. Adams has also officiated the 2008 NBA Europe Live Tour and the
2002 NBA All-Star Rookie Challenge. Adams officiated in the CBA for three years, and worked the 1996 CBA Finals. He also has three years of collegiate officiating experience in the Southeastern, Ohio Valley, Trans America Athletic
and Southwestern Athletic Conferences. Adams also has 10 years of high school officiating experience in Louisiana.
Adams has both a Masters and Bachelors degree in mathematics from Southern University.

Adams tends to be inconsistent especially on charge/block calls. He is on Tommy Heinsohn's naughty list (along with a lot of others). In one game, Tommy went ballistic yelling at the top of his lungs "GO BACK TO YOUR MOMMA BENNIE ADAMS!!!" However, he hasn't been particularly bad in recent games with the Celtics. The Celtics are 2-0 this season and 6-4 in their last 10 games with Adams while the Pelicans are 2-2 this season and 4-6 in their last 10. His home W/L record this season is 20-25.

Forte was the object of Tommy's wrath in the classic rant that follows (the T was later rescinded). The officiating in that game was bad both ways.
Forte was one of the refs along with Eddie F Rush that officiated a Celtics win in Indiana last season. The officiating in that game was horrible and very one sided toward the Pacers. One of the comments from the Pacers' forum said that they wouldn't blame Celtics fans if they punched out the refs. It's bad when the officiating is so terrible that the opposing fans feel bad about it. Tommy also had this to say, "I hope this group of officials doesn't officiate the playoffs. Holy cow! They are terrible." The Celtics are 3-0 this season and 6-4 in their last 10 games with Forte officiating while the Pelicans are 3-4 this season and 6-4 in their last 10. His home W/L record this season is 27-23.
Eli Roe
Eli Roe has officiated 499 regular season games during his first nine NBA seasons. Prior to joining the NBA staff, Roe officiated in the CBA, NBA Development League and WNBA. He officiated in the NBA D-League Finals for two years, the D-League playoffs for four years and the WNBA Playoffs for two years. At the collegiate level, Roe refereed in the SEC, ASUN and OVC conferences and numerous Division II and III, NAIA and Juco league games. He also worked in four Division I postseason conference tournaments.