Celtics look for 3rd straight win as they visit the Magic

Next stop in the Celtics 3 game road trip is a visit to the Orlando Magic.

Share All sharing options for: Celtics look for 3rd straight win as they visit the Magic

The Celtics continue their road trip with a stop in Orlando to face the Magic for the 3rd time this season. They will meet for the 4th and final time on March 13 in Boston. The Celtics beat the Magic in their first meeting in Boston 109-92. They lost the second game 95-100, but by that game, the Celtics roster was in considerable upheaval. Rondo had just been traded and Jameer Nelson was just beginning his brief stay with the team.

Now, going into this third game between the Celtics and Magic, the Celtics have once again had a change in personnel. Jeff Green, who started that game, is now with Memphis and the Celtics have added Jonas Jerebko, Gigi Datome, and Isaiah Thomas. Jae Crowder has become an indispensable part of the rotation and the team seems to be developing good chemistry.

The biggest change for the Magic since their last game with the Celtics is on the bench. Jacques Vaughn was removed as coach and in his place is former assistant James Borrego. Their core players has pretty much stayed the same though the 3 games. The change in coaches has made a big difference on the defensive end for the Magic. They have gone from 24th to 5 in points allowed since the change.

Both teams are dealing with injuries. Jared Sullinger, who failed to score in their last meeting, is out for the season. Avery Bradley missed the Celtics' first game of the road trip and is day to day with an elbow injury. He was to be re-evaluated and may fly to Orlando to join the team for the rest of the trip. Evan Turner sat out practice with a sore toe, but is expected to be available for this one.

For the Magic, Devyn Marble is out with an eye injury. They also have 4 players who missed their last game including Evan Fournier (hip), Willie Green (Achilles), Luke Ridnour (hamstring) and Nikola Vucevic (ankle) All 4 players are listed as questionable. The biggest loss for the Magic would be Vucevic. If he can't go, expect Channing Frye or Kyle O'Quinn to move into the starting lineup.

The Celtics are 6-4 in their last 10 games and are 10-19 on the road while the Magic are 4-6 in their last 10 games and 10-21 at home. The Celtics are looking for their 3rd straight win while the Magic are looking for their second straight win. The Celtics remain 2 games out of the 7th and 8th playoff spots. The Magic are 6.5 games behind the Celtics, or ahead of them, if you are considering lottery standings. They have the 5th worst record in the league in the lottery standings and are 3 games behind the Lakers, who have the 4th worst record. 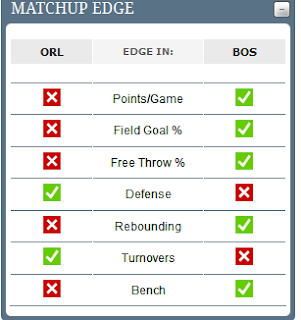 Tyler Zeller vs Nikola Vucevic
Vucevic is averaging 19.7 points and 11.2 rebounds per game. He is an interior defender as well as a force on offense in the paint. Zeller will have his hands full trying to contain him. The Celtics may get lucky if he misses this game with a sore ankle. He will likely be a game time decision.

Jae Crowder vs Tobias Harris
Harris is averaging 16.8 points, 6.4 rebounds and 1.04 steals per game and has been playing very well. Crowder will need to be his active self on both ends of the court to counter Harris' effectiveness.

Honorable Mention
Evan Turner vs Victor Oladipo
The Celtics could use their defensive tandem of Smart and Bradley against the Magic's backcourt. Oladipo is averaging 17.5 points, 4.2 rebounds, 4.0 assists, and 1.58 steals and is very dangerous on the offensive end. In their win over the Kings on Friday, he scored 32 points along with 10 assists and 5 steals. If Bradley can't play, it may be good to have Smart cover Oladipo while Turner guards Payton.

Keys to the Game
Defense - Defense wins games pure and simple. The Celtics' defense was good against the Pelicans and they need to continue to play that tough team defense against the Magic.

Rebound - The Celtics have to crash the boards in order to give themselves extra possessions as well as to prevent the Magic from getting second chance points and fast breaks. Much of rebounding is effort and desire and when the Celtics put out that effort on the boards, it seems to carry over into the other areas of their game as well.

Pace and Space - The Celtics must set the pace and run on every possession. They have to run and keep up the pace the entire game. When they get quickly up the court they can often get easy baskets before the defense sets up. Also they need to move the ball and find the open man. When the ball stops moving and they move away from team ball, they tend to struggle.

X-Factors
Effort and Road Game
The Celtics usually have a chance to win every game where they play hard and give their best effort. They can't hold back even though they are playing in the first of back to back games and in the midst of 3 games in 4 nights. And they can't let up because the Magic are a lottery team. They have to play hard and give maximum effort. The Celtics are once again on the road and young teams often struggle with consistency on the road. They have to block out the hostile environment and play hard for the win.

There are two very badly called games that Washington called come to mind. In a loss to the Pistons three seasons ago, Detroit shot 46 free throws to 15 for the Celtics, Rondo was ejected, and Tommy Heinsohn called it the worst officiated game all season (are you cringing yet?). In Game 2 vs the Heat in the 2012 playoffs, the Heat shot 47 free throws to 29 for the Celtics, in spite of the Celtics attacking the basket all night. There were bad calls throughout the 4th quarter and OT, all in the Heat's favor. Pierce, Pietrus, and Dooling all fouled out. LeBron was given 24 free throws all by himself. For the most part, other than those two games he hasn't been too bad. The Celtics are 2-1 this season and 4-6 in their last 10 games with Washington. The Magic are 3-3 this season and 5-5 over their last 10. His home W/L record is 28-26.

Kevin Cutler
vin Cutler is entering his fifth NBA season after having officiated 217 games in his first four seasons. Cutler owns six years of collegiate officiating experience, including the 2009 NIT and the 2010 NCAA Tournament. Additionally, Cutler worked two NBA D-League Finals as well as the 2008 NBA D-League All-Star Game. Cutler called the 1/9 game against the Pacers this season and there were a series of terrible calls down the stretch of that game, including an out of bounds call that was obviously wrong and which gave the game to the Pacers. The Celtics are 1-2 this season and 5-5 over their last 10 with Cutler. The Magic are 2-2 this season and 3-7 over their last 10 games with Cutler. His home W/L record this season is 26-18.

David Jones
David Jones has officiated 1,494 regular season games and 67 playoff games throughout his 25 seasons as an NBA official. In addition, Jones officiated both the men’s and women’s 2000 Olympic Bronze Medal Games. Jones has eight years of collegiate officiating experience in the Southeastern, Trans-American Athletic, Metro and Sunshine State Conferences. In the past, he has been pretty good in calling the games. The Celtics are 3-2 this season and 7-3 in their last 10 games while the Magic are 0-2 this season and 0-10 in their last 10 with Jones. He is a homer ref with a home W/L record so far this season of 28-18.