Celtics host the Indiana Pacers looking to win the season series and move a step closer to winning the 8th seed in the playoffs.

Share All sharing options for: Celtics host the Pacers in yet another must win game for their playoff hopes

The Celtics host the Indiana Pacers in yet another must win game. This is the 4th and final meeting between these two teams this season. The Celtics are up 2-1 in the series, having won the first game101-96 at home and the most recent game 93-89 in Indiana, ending a 7 game win streak for the Pacers. The Pacers won the second game of the series at home 107-103.

The Celtics bench has been coming up big for the Celtics and they will need to play well in this game also. The Pacers bench averages 40.9 points per game, which is good for 2nd in the league. They also average 19.5 rebounds, which leads the league. The Celtics will need a good defensive effort from their bench as well as putting up points.

CJ Miles left the Pacers game on Tuesday with an ankle sprain and didn't return. He is listed as day to day for this game. Rodney Stuckey played with a sore wrist on Tuesday, but struggled and so is listed as questionable for this game. There have been rumors that Paul George would return for their games down the stretch but is not expected to be available for this game. This is a must win for the Celtics if they hope to stay in the playoff race. A win would help them keep pace with the Nets and also give them the tie breaker against Indiana should that come into play. 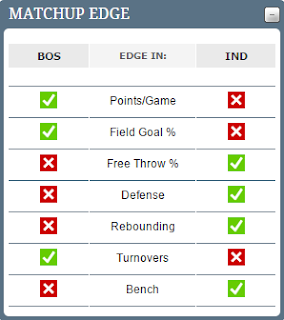 Tyler Zeller vs Roy Hibbert
In the game that the Pacers won, Hibbert finished with 19 points, 11 rebounds and 5 blocks. In the Celtics win over the Pacers in March, the Celtics held Hibbert to 5 points on 2-6 shooting along with 7 rebounds and 1 block. Hopefully the Celtics can once again limit his production in this game.

Marcus Smart vs George Hill
George Hill runs the Pacers' offense and it will be important for Smart to keep him from getting into their sets quickly. In their last meeting, Hill went off for 30 points along with 5 rebounds, 8 assists and 1 steal so the Celtics will also need to keep him from going off offensively.

Honorable Mention
Brandon Bass vs David West
West is averaging 11.9 points, 7.0 rebounds and 3.3 assists but he is capable of having a big game if not defended well. In the last meeting between these two teams, he finished with 11 points, 4 rebounds, and 3 assists.

Keys to the Game
Push the Pace - The Celtics are most effective when they run and move the ball. They struggle when they slow the pace of the game down. The Pacers are playing on the second night of back to back games and so the Celtics need to push the pace throughout the game and maybe they will wear them out.

Defense - Even though the Pacers aren't necessarily a high scoring team, averaging 96.9 points per game, the Celtics still need to play tough team and individual defense as they have players who are capable of having big offensive nights. Also, since the Pacers are a very good defensive team, allowing only 97.3 points per game (5th in the league), playing good defense themselves will be the Celtics' best bet to beat them.

Rebound - The Pacers are 7th in the league in rebounding at 44.5 rebounds per game, thanks in part to their 7'2" center. The Celtics will need to put out extra effort to crash the boards as a team in order to prevent second chance points for the Pacers. The Celtics can't score without the ball and so they need to grab rebounds to give themselves more scoring opportunities.

Be Aggressive - The Celtics need to play hard and be aggressive from start to finish. They have to be more aggressive on the boards, in diving for loose balls, in going hard to the hoop, and just play harder on both ends of the court.

Don't Depend on 3 Pointers - If the 3's are falling, it's really great, but too often they aren't and the Celtics wast possession after possession by jacking up 3's with the rebounds going to their opponents. Good things happen when the Celtics make an effort to get to the basket.

Effort and Focus - The Celtics need to bring their best effort to get a win in this game. If they come out with a sub par effort as they have in several of their losses, they won't have a chance. They need to play with effort on both ends of the court. They also have to stay focused. When they lose focus, their game suffers on both ends and they can't hit their shots and can't get stops.

X-Factors
Urgency and Focus
Both of these teams are playing for their playoff lives. The team that has the most urgency in their game and plays like they want it more, especially on the defensive end, will get the win. Hopefully that is the Celtics.

In the past, Goble has been good in some games and terrible in others. He was the referee who called the clothesline on Barbosa in a Nets game 2 seasons ago a regular foul. He also called a foul at the end of that game on an obvious clean steal that could have changed the outcome of the game. In a Clippers game last season, he ignored fouls by the Clippers and called phantom fouls on the Celtics all game. Tommy made the comment that the Celtics had no shot to win after the officiating took over. This season against the Timberwolves, the officiating was terrible and the Wolves shot 32 free throws to 9 for the Celtics. The Celtics are 2-2 this season and 4-6 in their last 10 games with Goble and the Pacers are 1-4 this season and 2-8 in their last 10. His home W/L record is 37-21.

Steve Anderson
Steve Anderson enters his second NBA season having officiated 45 regular season games. He joined the full-time staff in 2013-14 after six seasons as a referee in the NBA D-League and already having officiated 18 regular season NBA games as a non-staff official. Anderson officiated the FIBA U19 World Championships in the Czech Republic in 2013. This season in a game vs the Nets, the officiating was one sided toward the Nets and Brooklyn took 30 free throws to 14 for the Celtics and that was after they tried to even it up down the stretch. The Celtics are 4-1 this season and 5-5 over Anderson's career while the Pacers are 0-4 this season and 3-4 over Anderson's career. His home W/L record is 28-21.

Kirkland earned some measure of notoriety when he jumped in to block a Kris Humphries free throw in a Nets game last season. This season in a game vs the Grizzlies, there were quite a few terrible calls. One of the worst was when the ball hit the rim and the Celtics tipped it in and they called a 24 second violation without checking on the monitors in spite of pleas by every Celtic to do so. There were a lot of head scratching calls and non-calls in that game. The Celtics are 3-0 this season and 3-7 in their last 10 games that Kirkland officiated. He can be good or bad depending on the game. The Pacers are 1-1 this season and 5-5 in their last 10 games with Kirkland. His home W/L record this season is 28-24.